After episode one of AKB0048 made its bizarre and entertaining statement, I figured episode two would settle down and work on basics, you know, more backstory, introduce more characters, that sort of thing. Well, it did. It was also as crazy as episode one. It was a lot of things. I’m amazed they packed it all in.

But first they take care of business. The three girls are safely aboard the space yacht, but there are other auditioners on board we get to meet. First there’s Makoto, who gives a big speech of self-doubt in her cabin which I found entertaining, then continued on, loudly, through the rest of the episode, so now I’m sick of her. Then ten year-old stowaway Sonata, and Suzuko, the quiet one. They’re all instant friends–and rivals, something the show will play with later. These scenes aren’t bad, but they felt a little clumsy, sometimes tapering off as if the creators were fumbling for the scene-change button. And the art looked crude compared to the richness of that planet. I began to worry. Had they blown it all in episode one? 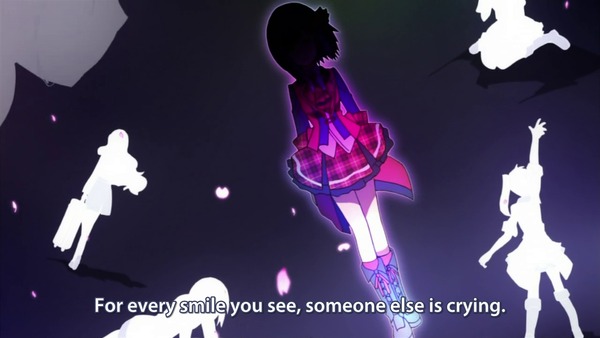 Besides their adventure, the other story has to do with Chieri, the rich girl who was with them that fateful night but left to do heiress stuff. Now she’s missing, though the show tries not at all to hide the fact that she’s snuck on board. It’s so obvious that when the girls hear she’s missing they instantly search the ship, and Nagisa finds but does not recognize her, though finding a strange girl below-decks who gives her a speech on the Darwinian nature of AKB0048 auditions should have tipped her off. Still, it was a curveball to give Chieri that attitude. “Okay,” I thought. “It’s not as wild as episode one, but interesting enough … Hmm, they have a lot of time left …” 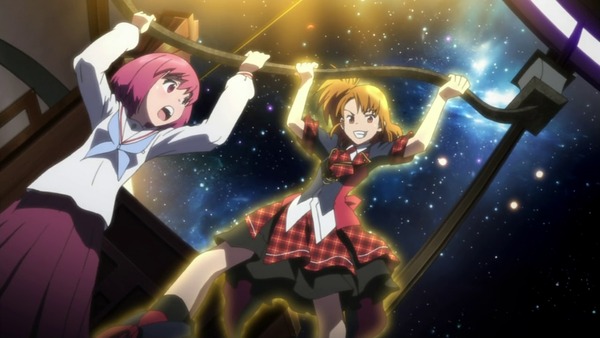 So much happens after that it’s hard to describe it all. The DES attack and seize the ship. We get another insane battle sequence. Nagisa finds the time to rebut Chieri’s earlier speech. “Heavy Rotation!” And that floating, mewling kirara thing that appears in the presence of idols yet apparently gives mixed signals. Just when you think they’re done they throw in something else, up to the group scream at the end. And all for a story that is basically about girls auditioning for a idol group. I think that’s what puts this show (so far) over the top: it’s so damn silly. You can’t resist it. Well, I can’t.

Eureka Seven Ao 4 is odd in that it has the big battle stuff in the first half, and the second is all decisions and escapes, almost like they have it backward. Basically Ao helps destroy the Secret and joins Generation Blue and gets off the island. Little moments stand out. Naru gets very little screen time, but almost every time we see her she does something affecting, even if it’s simply a smile or have tears well up. I hope she’s going to get more action, but they seem to be using her sickness to keep that from happening. She’s about to run off after something when “Cough cough,” and she’s forced to stop. As for Ao, he’s turning into the brave, plucky sort the show needs, but even with his Eureka connection I have trouble with him mastering his Nirvash so quickly. Though I liked his first attempt, and GenBlu’s realization that he’s not ignoring them, he just doesn’t know how to turn on the radio. It just makes his second, studied attempt more unbelievable. Still, everything’s developing nicely.

Kore wa Zombie desu ka of the Dead 5 is no different from the others. Sera and Saras hint at a larger looming threat, but they’ve been doing that for episodes now. What we really get is Eu getting a fever and Ayumu’s attempts to cure her, which involve the usual abuse at the hands of others, mainly Haruna this week, since Sera is off at a hot spring talking about that looming threat. It’s got the usual sweetness quotient, including a bit where Haruna doesn’t beat up Ayumu when Eu climbs into his bed, because she figures she wanted that. So she gets in bed with her herself. Oh, and we learn that tangerine pith is forbidden fruit to “denizens of the netherworld.” Good to know. 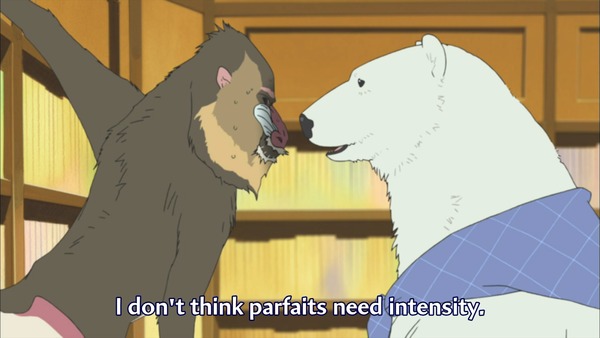 Anyone who’s watching Polar Bear’s Cafe probably isn’t doing it for the laughs. You can see those coming a mile away. Like in the first part, where Panda’s dreaded week of full-time work is lightened by a mysterious fan, who, to us, isn’t so mysterious. Or in the second, where Polar Bear decides to invent more parfaits for the fair, and everyone has an idea. You’re probably watching it because of its slow and easygoing nature. But every now and then they manage something a little surreal, like one image that could have come from Utena, or in the scene above. Little bits like that keep me watching.