Lupin III – Mine Fujiko to lu Onna 12 is a hell of an episode, and I finally kinda sorta know what the hell’s going on.

Frankly, I had found the events leading up to now confusing. I had figured out that Fujiko had been taken at a young age and “raised” by Count Almeida, but everything else was a blur of images. It didn’t help that Lupin had received the most accurate account but was so addled with drugs at the time that we couldn’t tell what was truth and what was illusion. This episode looked to be more of the same, as Fujiko and Zenigata team up to visit Almeida’s theme park. This pairing might be odd, but the circumstances (Zenigata just walks up to Fujiko at a face and slaps handcuffs on her. She offers information on kidnappings similar, we assume, to her own) make sense. Less clear is why Lupin and Jigen also happen to show up at the same park, practically invited to, judging from the tickets they find on themselves (Love how Lupin knows to look under Jigen’s hat).

On the other hand, it also means that Almeida is assembling them there on purpose, and he’s successfully pulled the strings every episode. No one has come close to thwarting him or even worrying him so far. But I’m proven wrong. The owl that confronts Lupin and Jigen on the roller-coaster has a different outcome in mind for Fujiko. Almeida (I assume) just wants her back. His motivations are that of a sick old man who wants to fondle the beauty he once had total control over. It’s a sad, pathetic, desire, also rather boring for a show as quick-witted as this. The other owl (I’m guessing it’s her father) is much more interesting. Maybe he thinks it’s the only way to free her from all this.

In one way this episode is hard to watch. We get to see Lupin, Jigen and later Goemon do their things, leap, dive, shoot, flash swords, defy death, but Fujiko doesn’t get to share any of this. She and Zenigata enter “The House of Fujiko,” a twisted “It’s a small world” type ride where her past is shown to her and she begins to remember the past she had sealed away. She slowly breaks down while Zenigata watches, unable to help. And even he, her last source of support, is distracted when a brainwashed or equally-broken Oscar reappears. It’s a terrible thing to watch for any fan of this series. But we still have the others, “supporting characters in Mine Fujiko’s story,” as Lupin puts it, out there, doing their things. I hope the conclusion is as wild as this episode was.

Sakamichi no Apollon 11 brings us what looks to be the cheapest plot twist imaginable, one that made me throw up my hands in disgust, and this right after one of the loveliest sequences of the series, and a terrific opening scene to boot. I had thought that Sentarou had too much character to simply run away like that, and he did; he just needed Kaoru to remind him by throwing himself on Sentarou and nearly getting killed in the process. Still, Sentarou should have known better than to even try. The “cheap” plot twist is actually misdirection. I’m not sure why they did it that way other than to give us a cheap thrill, or to make me throw up my hands, as I said.

But because of this Sentarou now actually does leave, and like the last attempted exit it doesn’t feel right. I don’t recall anyone being hurt by Sentarou’s actions, in spite of what he said. More interesting is his rejecting the people and things that used to give him comfort. Not just the rosary (hung on the hospital door as if he was passing the comfort to sa-chan), but Kaoru, emerging from the white sheets and being pronounced an angel in that nice rooftop scene.

These two bits of plot sandwich a terrific sequence where Ritsuko is coerced into singing “My Favorite Things” for the festival. She’s reluctant, but while she sings the words in an adorable engrish soprano voice we get still shots of them rehearsing. It’s clear that at that time she was surrounded by her favorite things. It’s a shame the show has to thrown in random accidents to generate plot. It can do so well without it.

Our other noitaminA show, Tsuritama, looked for all the world like it might end this week, but the stakes apparently were too high. I mean, what could be higher than our heroes fishing the alien out of the water as foretold by the scolls, before Duck fires its missiles or everyone in the world does the Enoshima dance? 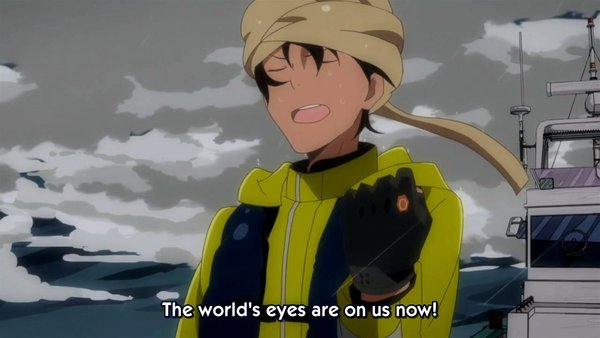 The episode plays out in predictable fashion. The cliffhanger is dealt with (Ayumu survived and rescued the rod), important things are said, a complication when Duck shows up (fought off by Akira, heroic for the second episode in a row, with help from Paprika. Quack!), growing problems with trying the catch the alien (overcome by Yukim though he seemed to pluck the solution of painting the lure red out of nowhere) while the typhoon gets worse, and another crisis at the end which has as much to do with friendship as it has to do with aliens. It’s thrilling to watch. The art style gives us enormous waves everywhere while the soundtrack plays its best exciting themes and Yuuki casts again and again. Eno-shima-bowl! 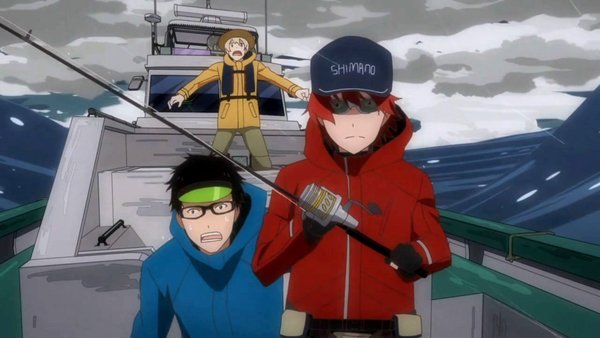 It’s also silly. Well, it can’t help being silly when the Duck forces, ready to fire missiles, are dressed in those squeaky suits and people are wandering around doing that dance, which is supposed to be a bad thing. Paprika the duck starts the boat. But these things have been so effectively worked into the story that they don’t distract from what’s at stake. The saddest moment of the episode of the show is when the silly alien with a triangle floating over his head decides he has to sacrifice himself, something they had set up before which I hadn’t thought of until it happened. A lot of things developed in early episodes, such as Yuki’s growing as a person (not to mention his fishing skills) and Natsuki’s acceptance of his father, came into play, and it all worked. Well, as I said, there was too much going on for the show to end here, but I’m looking forward to the big finish next week.