La Storia della Arcana Famiglia brings us to the island of Regalo and the “family” who runs the place. We start with one of those nameless villains whose villainy brings out all the characters to defeat him and introduce themselves to the viewer. Thus introduced to a boatload of young men and one feisty girl we move on to the next scene, where their “Papa,” Mondo is going to retire. So everyone’s gonna fight and the winner becomes the new boss AND marries the feisty girl! The FG (Felicita) is not amused. Neither are some of the guys. Nor am I. What kind of asshole marries off a girl in his employ? Is it any wonder that so few woman are part of his group? While they debate this and get into little skirmishes with each other AND with Mondo, who’s the strongest (another reason to despise this organization that picks the best fighter as the leader) we learn that they all have Arcana Powers based on a tarot card, so we have little asides where some characters get a background description for our benefit, or annoyance. None of this bodes well. I can overlook this autocratic mafia-based government story, maybe, but the moldy opening episode introduction and exposition scenes suggest the entire series will be as clumsy as this. I’m not dropping it yet, but …

While I could predict the scenes in Arcana a mile away, I have no idea what Jinrui wa Suitai Shimashita was going on about, and I didn’t care much. Once you think you have a handle on things the world makes a left turn and becomes even weirder. Just what I like.

It looks like we have a future where the human race is dying out, albeit in a colorful, pastoral way. We meet, er, Wikipedia calls her Watashi, a young girl who is a mediator with the United Nations conciliation Commission, which makes her something of a VIP to the local peasants, who seem to think she’s an expert on everything, including, in the opening scenes, killing cute chickens for their meat. When that ends in failure (the menfolk don’t help because they’re off hunting, returning empty-handed), she goes home and we learn what she mediates: cute little Keebler Elves the humans call fairies. They’re adorable and like sweets. They also ask interesting questions. 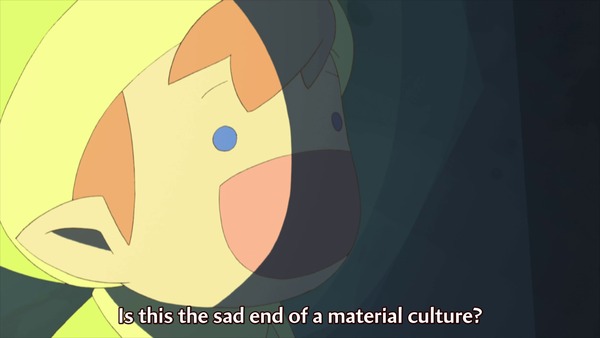 I figured that the elves, sorry, fairies, are just imitating words they hear. This world is full of bureaucratic speech people seem to use because they haven’t come up with any new words. But later we see humans reacting to mass-produced fairy goods in cans, marginally edible, too. Is this more imitation, or the fairy way to help the humans survive? Possibly the latter. They are disappointed when Watashi comes home without sweets for them. Interesting questions, and I was thinking I had a grip on this thing when the show proceeded to lob weirdness bombs. First the headless, skinned, living chicken with the fairy logo branded on it living in the wild, and then the discovery of a fairy factory, with a human receptionist and a robot slice of bread that … well, I won’t give it away.

Through it all there’s a pull between absurdity and the remnants of mass-production society and the bureaucracy that comes with it, all coming together in Watashi. She can be nervous about her mysterious hair, threatening girls with governmental speak the next (in order to cover her butt), muttering ironies, making a note on the pointlessness of meetings, whatever. She’s stuck in an uncomfortable role and uses the verbal tools she’s learned to cope, all delivered in a matter-of-fact way that adds to the humor. In short, she’s a delight, this world is a delight, episode one is a delight. What happens next? Will we get a story arc? I rather hope not. If they can keep up the strangeness, and there’s no guarantee they can or it might wear thin, I’ll have fun just watching whatever they choose to throw at me.

Space Brothers 14 is more character development in that pod. I’m getting tired of it. I suppose it had advantages. The applicants have nothing outside to mess with them and the show can take its time looking at everyone’s soul. But there are limits. Well, this week we take a look at Fukuda, a man older than I am! There’s hope for me yet! … And he breaks his glasses his scores plummet. Since everyone in the show has to have a sad part of their past (well, that’s true for anyone) we get lowlights of him neglecting his daughter to design and build rockets. His designs are passed over and his wife wants nothing to do with him, and now he’s trying to live a children’s dream again. The other side of this is Furuya, the team’s annoying member, too proud to apologize over the glasses but feeling more and more guilt because of it. A lot of other little things happen, Mutta tries to size up the team members, Reiji acts superior, and Serika eats. One week in the pod gone, one more to go. Oh, boy.

Acchi Kocchi appropriately sets up its “will they or won’t they?” finale with another Valentine’s Day episode. Along with the usual riffing, and making sure Mayoi didn’t put a frog in her chocolates again (Sakaki retaliates this year with White Day pigs’ feet in marshmallow) the show takes extra time for the Tsukimi/Io angle. It’s actually sweet and romantic, with no punchline. So is the White Day section, though it doesn’t give us any confessions, just Io stroking Tsukimi’s head, so there’s room for a sequel. And why not? This show effectively gave us cuteness with occasional violence for twelve episodes. There’s plenty of room for more.

Shining Hearts – Shiawase no Pan ends the way you’d expect it. Big battle between the huge battleship and the small pirate boat, with cosmic help from those folks from the palace, except the prince, who’s too busy playing his lyre. Meanwhile Rick cuts a hole in the ship and finds Kaguya, not to mention the boss lizard, so they have a fight. Rick is saved by the glowing pendant which then rises to join Kaguya (trussed up crucifixion-style like Queen was earlier), which sends a signal to Queen to unleash her big red beam, which opens up a hole made by Hank’s big gun earlier. The ship blows up. Rick and Kaguya get blown or floated or whisked to a safe part of the island to talk about how tired they are, and the crisis is over. So much for the unimportant stuff. The big news is that everyone eats bread. Rick apparently has to retrain himself as a baker, but that’s done quickly enough, and so there’s even more bread to go around. The bread of happiness, they call it. Why did I watch this all the way through? Anything interesting, besides the bread was eventually unexplained except for stuff like colliding dimensions. Why was Kaguya and the amulet so important, and why together? Oh well, there was the bread. Which reminds me, it’s dinnertime.

One thought on “New shows, old shows and more finales”