Rinne no Lagrange II 4 or 16 has no big action scenes apart from one poorly-piloted mecha that gets shot down, and yet the episode is a delight.

I think one reason is that even though we have two powerful galactic empires meeting to negotiate peace when the leaders want war anyway, with lives hanging on their every act, everyone does whatever the hell they want anyway. When Dizel and Villa (I’m not going to write out the full names because I’m lazy) meet I expected knives and lasers, but instead they mutter nothing much. Then Asteria proves she’s not powerless either by trapping them in an elevator so they can talk further. Madoka, Lan, and Mugi get to listen in, of course. The guards and escorts can only grumble. Then, of course, Yurikano gets proactive and demonstrates her piloting skills. When Madoka insists on talking with her, she damn well does. Authority doesn’t matter, it’s all willpower in this episode. Later, our girls don the worst disguises ever to get aboard the Le Garite spacecraft. Of course everyone knows who they are, but it’s almost like they’re too worn down by all the things they can’t control to care, even if one of their unexpected passengers is the adopted sister of the enemy.

Then there’s that human monkey wrench named Yurikano. We see her early on but forget about her until she gets bored and hops a mecha. She’s Villa’s REAL sister, fodder for Mugi to ponder in a later episode, but for now all we all wonder: What the hell is she doing with Dizel? Villa is shocked. Dizel looks almost apologetic. Also, she has no memories of the disaster that Dizel rescued her from (and that her brother didn’t). That’s some more nice plot-fodder for the future, but more important is that she’s the figure who appeared in Madoka’s cockpit last week and tried to strangle her, and then there was that moment on the cosmic beach last season … Oh yeah, Yurikano is living plot-fodder. And Madoka, doing whatever the hell she wants, is now in SPACE!!! and, judging by the previews we’re going to get more weirdness last week. Oh, yeah, we got some already, with that flower … I can’t wait until next week …

It’s almost as if the show wants to tell us an exciting story but doesn’t want us to get too bogged down or depressed by anything. Every potentially dangerous moment is cut short or defused by a bystander’s comment or the sudden appearance of something, often Madoka. Negotiations over big, important things should always be undermined this way, just to let them know who’s really running the show.

In Hyouka 15 the school festival is still underway, but the classics club begins to concentrate on the Juumonji mystery. 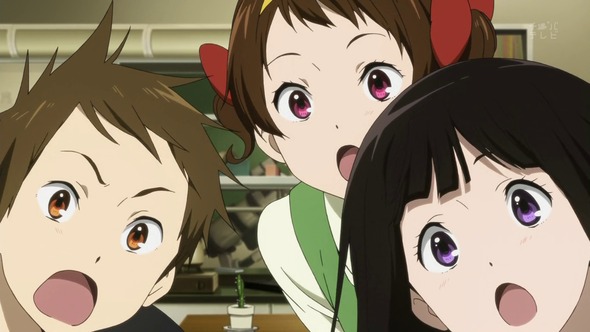 If you look at the earlier episodes you’ll see many scenes that didn’t involve festival-goers running everywhere, but, apart from the classics clubroom where Houtarou sits in peace, it always felt lively. Now, as each member goes off on their little adventure, it almost feels deserted, or rather, the big fun events are all off-camera, upstairs or down the hall. All the better to let each character focus on their own goals. Inaba’s source of angst is yet again the manga club. Not finding that volume she was looking for means more abuse from the vocaloid cosplayers but it turns out one of them knew one of the collaborators for the book, which Kouchi claims to have never seen. So Ibara has her own mystery to solve, if she can get past the withering disapproval of the vocaloids.

Back to Juumonji. Eru is now Officially Curious, to Houtarou’s dismay, so he picks up the pattern of club names chosen. Genius! But it turns out that others have figured it out, too. So not-so-genius. While he further ponders patterns Eru tries to use her new-found negotiating skills on Masashi with mixed results. She needs to learn subtlety but her adorableness at least earns the classics club a mention in the newspaper club’s scoop. Alas, in doing so she came off as more of an idiot, taking Irisu’s points nearly literally, than the slightly awkward but earnest girl she usually is. You feel sorry for her, because she tries so hard, but that wasn’t her best moment. 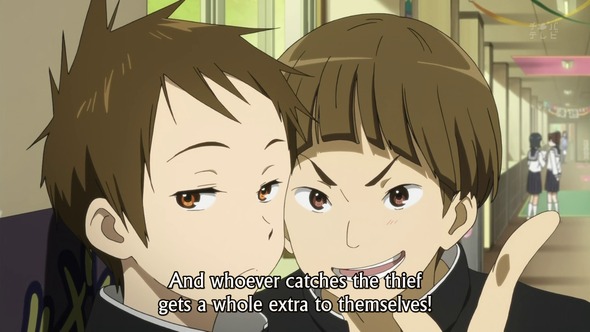 Satoshi’s story is more interesting. We learn at the end that he’s determined to catch the culprit red-handed (failing miserably so far). When he tells himself that this isn’t the right type of mystery for Houtarou you can feel his anticipation. He wants to step out of Houtarou’s shadow, perhaps, which completely ignores his own strengths, his perceptions about people, and even his maligned skills as a database. Well, I hope he succeeds in catching the villain (is that the right word?). He probably won’t. There may be a thousand suspects but that doesn’t mean you can’t narrow it down. Maybe I’m wrong, or at least, he’ll get the credit for it with Houtarou guiding from backstage, avoiding the panda act. As for me, I want to see how Ibara’s mirror is going to fit into all this, or at least what they’ll trade for it.

In contrast to the other two shows here, Yuru Yuru II 5 is dreadful. We start with Kyouko needing batteries for the AC and hitting her friends houses along the way. You know how it will end so you hope the along-the-way business is entertaining, and it’s not. Next, where Akari waits for a train, is even worse. Watch Akarin alone and you know why they make jokes about her lack of lead-character traits. It gets slightly better after that, but not much. And as much as Akari bores me, she didn’t deserve that kind of treatment. I should have skipped this one.