Kyoukai Senjou no Horizon 19 finishes up its story arc, I think. Well, at least the five duels were concluded and interrupted. First we get a history lesson from Master Scarred (cloak-girl) about how Catherine, Anne and Henry VIII all got whisked off by fairies at some points in their lives, which is linked somehow to Carlos I of Espana, but Tenjo can’t stop thinking about Master Scarred’s butt. After that look at the remaining battles. Tachibana dispatches the wolf in bloody fashion with the aid of a banana peel, I forget how Honda got away from Death-guy, and that third girl uses “flat chested evasion” to get out of a jam. In short, none of them lose, so Toori doesn’t have to fight anybody. I thought there would be at least one.

Meanwhile Toori and Horizon have their date, the concept of sadness and loss is discussed, robot to human. Meanwhile Shakespeare reminds Toussaint about his literary failings and now we’re supposed to guess which childhood friend she or he is. Suzu and whatshername decide to get that safety pod of theirs moving, And just when I thought the episode was getting a little too normal, turns out there are two Master Scarreds, a good and evil one, naturally. The episode ends with Tenjo doing a double, no triple take. As for me, I’ve gone beyond ever being surprised by this show. 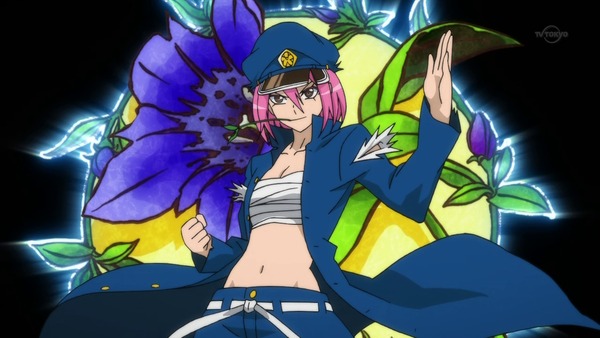 Binbougami Ga! 7 brings us a new character, Rindou Ranmaru, your typical delinquent type. We meet her in a bewildering scene where Ichiko is temporarily mistaken for a shoplifter, prompting a bizarre speech by Rindou where you aren’t sure if she’s insulting Ichiko or the cops. At least, *I* was confused. Early on Ichiko confuses her for another god of misfortune, but she’s very human, and we learn how much throughout the episode, which proceeds to lose some energy along the way because of it. The overly stern dad who wanted a son, etc. It turns into another example of Ichiko learning to care about something in spite of herself. We even get a girly makeover scene, never mind the forced gender expectations this reinforces and the fact that Rindou is a lot more fun when she acts like a thug, and that some boys might actually prefer her that way. Never mind. She’s looks like a good fit for the show.

Yuru Yuri II 7 is pretty good, much better than the last one. We see all the characters’ sisters as they interact. Most of them are very nice and patient people, sometimes exasperated by their siblings’ behavior, but you have to feel glad for the girls that they have such people in the family. We get everyone from little Kaede and her adorable interest in Ayano’s boobs, er, well-being, to Tomako, Chinatsu’s older sister, who has an adorable crush on Akari’s older sister Akaze, who has a rather disgusting crush on … Akari. Okay, most of these sisters are as nuts and lustful as the main characters. This is all fine, except now I have a whole new batch of characters and I have to remember who has the hots for whom. I wish this show came with a scorecard.

Apart from Horizon, I take the most notes for Joshiraku, and not coincidentally they are the two shows I have to least to talk about. So (prepares notes), we start with Kukuru depressed, which leads to Christmas which leads to spending too much to boost the economy. They sing an ode to cheer Kukuru up, that religious woman shows up and gets slugged, a miracle occurs, then another, and now Kukuru’s happy but Marii’s depressed and turns into a demon and the only way to get rid of her bad vibes is to rub her boobs. On to part two, in Harakuku and Back-Harajuku which leads to the use of the word back, then tongue twisterscome to life and then on to crepes (there is a Miyazaki section in there, too) and Marii’s problems with ordering and eating them. Finally it’s skin types, including Marii’s big sister skin, then tattoos, “Skin Arranger!” and giving Genkyou goosebumps in a number of confusing and unpleasant ways. Not the best episode.