There are two main stories in Sword Art Online, and they’ve been neglecting both–up to now.

The main story is, of course, getting to the top of the game, if you can still call it that, and getting back to the real world. We learn, unfortunately largely through exposition, that the number of players still trying to do this has been shrinking. You still find front-line players who push the boundary up, but not as many, while many others have settled for hanging back and offering a support structure for them. After all, it’s been two years. Most people want some peace and quiet, or at least a comfortable home to go to, when they get sick of fighting monsters. Mills, as capable a fighter as anyone, runs a shop now. Asuna’s home is luxurious. Kirito says a day can go by without him thinking of the real world. And you wonder, if there is an end to this world and everyone has to go back, how many will regret it? How many of them could still fit into the real world, if they ever could? Will “winning” the game ruin it for the people who want to stay? Will some people try to stop people from winning? I dropped Accel World early so I might be wrong, but I recall that a number of the players there formed an alliance and pointedly didn’t try to make the last level.

Then we have Kirito and Asuna, the other story. They’ve been interested in each other since they first met, and the series has made it clear that they’re meant to be a couple, but we haven’t seen as much of Asuna as we should. Last week she just popped in and out to break poor Liz’s heart. But this episode they get together, first to enjoy a rare food item together, a nice domestic scene that shows why some people in that world grow comfortable enough to want to stay, then to enjoy a bit of exploring. It’s fun to watch them together, practically a married couple already. When they work together to kill a monster it’s almost as though they’re showing off for each other, proving that they’re worthy of the other’s respect. And for Asuna, restricted by her guild and with a tool of a guard stalking her to “protect” her, so he says, it’s no doubt a relief to get away with a guy she likes for a while. It’s a pleasure to watch them, especially when they fight so well together, and the fun isn’t over as we close with them facing a nasty boss. How much you want to bet those transporter cubes aren’t going to work?

I missed last week’s sub of Kyoukai Senjou no Horizon II and was thinking about waiting for this week’s to show up and take care of them in one post, but the thought of TWO Horizon episodes back-to-back unnerves me, besides …

So here’s plot-heavy episode 20. Any hope that I would be able to figure things out died in the first scene when Tenzo learns that the “Fairy Queen birthed by Anne Boleyn had a twin sister,” and so we got Mary Tudor and Mary Stewart in one body, and fairy Queen Elizabeth, and already my head’s hurting. The upshot is that Double Bloody Mary is going to be executed, but for real, no reenactment, as they hope to strengthen Excalibur Caliburn and England’s heart pulse, anyway, solidify the nation. DBM is fine with this, Tenzo is not, but not much he can do about it. Meanwhile the Musashi folks plan on leaving, but since they’ve proven they’re as strong as England, they won’t let them. So we check to see how Mitotsudaira’s doing. She’s naked, of course, and capable of laying out Toori with a side table when he barges in. Also, Horizon has created another plane of existence around her backside, where she can hide all sorts of stuff.

On to the True Festival of Oxford, another of those long talky scenes where reps duel with words. This time it’s Honda vs. Elizabeth over the immediate future of Musashi. Honda begins by giving us a strikingly clear and concise account of Musashi’s goals. I wanted to applaud. However, the word dueling then begins and things get less clear. Honda says they’ll just leave and negotiate with another country, and more or less declares war on everybody. Elizabeth says she’ll send Holland’s fleet in to intercept, and then there’s the question of who’s going to engage Musashi, apparently a point of honor. Both sides state what they already have and Elizabeth gets pissed off, but they are interrupted by the arrival of Tres Espana reps. They’ll save that for next week, er, this week.

Kokoro Connect has another shocking moment in its first scene, but is lackluster after that. 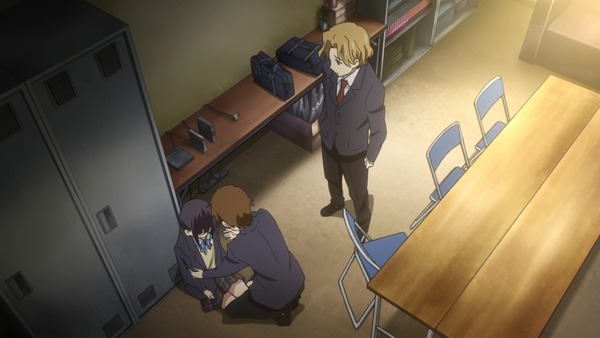 After all, you can’t top a main character slamming the head of the girl she loves against a locker for shock, even if he hadn’t quite meant for it to happen (hitting her with his schoolbag was bad enough, however), it was because his desires were unleashed, and Lori totally forgave him for it in her “Do whatever shit you want to me, it’s fine!” mode. And this moment of violence (so brutally well-timed that I flinched watching it) came as the topper to a cruel argument the boys were having about what to do with Yui. They hadn’t been “unleashed” at that time, it was simple anger. Moping at home later, Taichi begins to wonder what the difference is, anyway. Unsaid things were said: Taichi was being a selfish hero again and Aoki was jealous because he hadn’t been able to help at all. Ironically, it was Lori who summed it up that way.

So Yui’s not coming to school at all. Inaba is, but she refuses all contact. Now Taichi’s doing the same. Who knows what’s up with Aoki. Lori is the only one who wants to keep contact with the rest, but she’s coming to an empty clubroom now. Time for some outside interference. First there’s Fujishima’s scene-stealing, nutty organization of a class trip (I went “Oh Oh!” when I read that on the board) to encourage love. That bit was all right because it might actually make things crazier to get certain people in the same group. Less interesting was Gotou in regular human mode trying to give Taichi a pep talk, encouraging him to talk to his friends, which is exactly what cause the problem last time. Then Fujishima returns in her dictator of love mode and gives him more or less the same advice. And we learn that Lori is going to do the same. For the team to talk it out might be the right thing to do or it might be a disaster, but it either way it’s superficial advice that didn’t do much but waste time and set up a possible conflict during the field trip. Well, I suppose they’ll talk a lot next week; based on the previews there’s going to be a lot of shouting, but I expect that anyway.