Chuunibyou Demo Koi ga Shitai! is off to a promising start. Not surprising with its pedigree.

We got Yuuta, entering high school, wanting to put all of his 8th grade syndrome fantasies behind him, especially this dark flame master stuff he obsessed about. He’s boxing up all that old crap when a mysterious girl appears on his balcony! Okay, she’s clambering down a rope and isn’t wearing shoes, so it’s not as mysterious as all that, but it’s the first of a few instances where something foreboding or strange appears to happen only to have it prove to be mundane. The next day, after the usual beginning school business, trying to fit in, meeting-cute the class beauty Shinka and his new assigned pervy friend Makoto, Yuuta has more run-ins with the not-so-mysterious girl Rikka, who is caught in the foul throes of her own 8th grade syndrome, and winds up having to escort her home. Guess where she lives?

You forgive the ridiculous coincidences in a show like this, that the girl goes to the same distant school as the boy while living in the floor above him, because that’s standard issue for a high school romance. The trick is how things will play out. Too soon to tell, but Rikka scores big points for her combo of affected talk and exaggerated gestures coupled with a basic cute clumsiness. Jun Fukuyama provides an ideal voice for Yuuta, a boy who desperately wants to forget his old affectations but can’t because Rikka is there, constantly reminding him. The only problem I had was that Yuuta goes overboard with his denial, the acrobatic scene in the nurse’s office, for example, fun though it was to watch. But on the whole the tension between the boy and girl is just about right.

And the show has a head start with the talent that Kyoto Animation can throw at it. It looks great of course, maybe not quite on the level of Hyouka, but that’s another show with different moods and therefore needs (apart from Chuunibyou’s opening scene, which was pure Hyouka). This is a more straightforward comedy. Like Tari Tari seemed to happen in the Hanasaku Iroha universe, Chuunibyou feels like it’s in K-ON‘s. That is, a silly story with a fun characters, and smart script and direction… and the aforementioned animation.

Next we have our exciting, touching, and utterly confusing conclusion to Kyoukaisenjou no Horizon II. No, be fair, this wasn’t a confusing episode by Horizon standards. Instead, it’s the usual season-ending climactic final battle with ships flying everywhere, things blowing up, and lovers and friends celebrating (and accidentally throwing eroge games into the bonfire) episode you see in many other series. But since it’s Horizon we’re talking about, we see it through a fog of weird characters and even even weirder tech/cult-babble and weaponry.

Our witches start it off by reuniting and blowing up some stuff in exciting fashion (the battle scenes in this series are always good to watch), then there’s some sneaky cloaking maneuvers, but that’s a prelude to the big problem, Tres Espana’s plan to, I think, sink their own flagship so that the battle will be nullified. I don’t understand the ramifications of that, but of the two outcomes both would be bad for the Musashi. So in order to get behind (or in front) of said flagship Adele orders the enormous Musashi to execute a backflip. Very impressive! Then Horizon whips out her WMD and fires it. Should be game over (I thought it was game over last week when Gin lost) but the Tres Espana guys manage to push the beam back with great heroism and characters appearing out of nowhere and saying brave things. I love scenes like this, but these are the bad guys! I almost started rooting for them.

But then Horizon whips out her SECOND WMD, the one Neshibara got from Shakespeare, which means breaking a seal and adding avarice to her emotions. We also learn that Toori (still naked) is an outlet that acts as a go-between for Musashi’s ether supply. What that means to us is words of hope and confirmation from our loving couple, along with the warning that Horizon will be more difficult to handle in the future, not that Toori minds. It’s made moot by a Tres Espana vessel blocking the beam (they just won’t give up), but Double Bloody Mary, who’s not supposed to be there I thought, with Tenzo’s help, whips out big glowing sword thing and then it’s finally over. Sorry, Muneshige.

After that they tie up the loose ends. DBM joins the Musashi and shacks up with Tenzo (C’mon, Tenzo, be a man!), bonfires on both sides. That blond guy shows up alive and well to be with Gin. Curry is served. And the second season of the most confounding, bizarre, head-scratching series I can think of comes to a close. Two WMDs recovered, five to go! And in spite of all the things I’ve said here, I’ll probably watch the next one, because for all the bizarre characters and backstory, this mess of a story was always delivered with high spirits and a sense of adventure. You didn’t always know what was going on (hell, I rarely did), but you could tell that they were having a great time doing it. 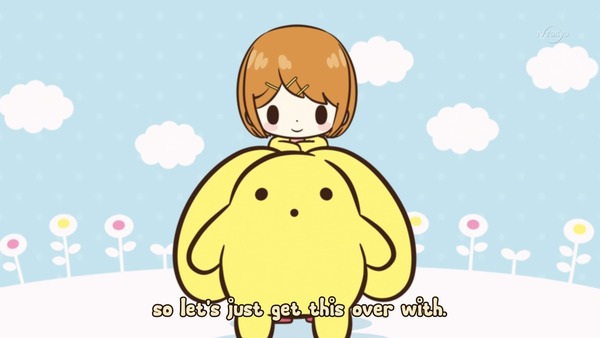 Finally, a three-minute thing called Wooser no Sono Higurashi. I’ve seen many mini-shows like this fall on their faces. Chitose was annoying. Yurumates made me wonder why they bothered. I will say that Wooser has better lines than the either of those. The character Wooser’s cynical, hapless delivery works well with the cutesy voices of the girls.