Hidamari Sketch – Honeycomb 6’s two parts make for one of the more different episodes in any of its seasons. 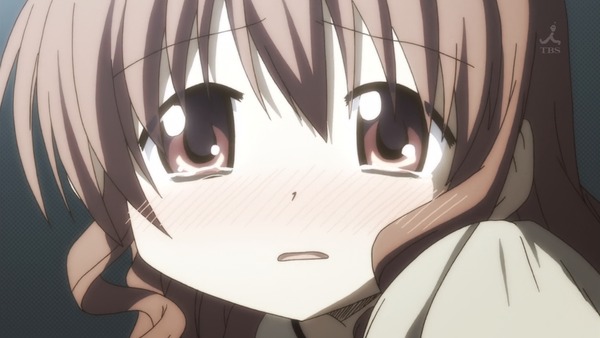 Mainly because part two takes a close look at Hiro. We’ve seen Yuno fret and worry about her goals and future a lot but rarely do we get this from the other characters. Maybe a little for Sae, certainly not for Miyako (the word “plan” is not in her dictionary, remember), and the others are a long way away from such decisions. But Hiro and Sae are right up against it, they’ve got those post-graduation goals forms we’ve seen in so many high school series, and like just about every other anime kid, are fretting about what to write. Even worse, Hiro is dreading graduation so much it’s making her sick. How sick? She’s lost her appetite!

Yoshinoya, for once, makes herself useful. Listening to Hiro talk about maybe becoming an art teacher sets off her bullshit detector, and she points out that even if she does and she returns to teach there, her friends won’t be around anymore. It doesn’t help her dilemma any, but now the reason for her anxiety has been clarified. After that it’s her friends’ turn. They give support in their own ways, useful or not, and she gets some touching reassurance from Sae. Hiro would make an excellent teacher, that’s not an unrealistic goal, and Sae will be there for her, emotionally if not physically. Sae, by the way, is considering liberal arts rather than art, which makes sense for her.

For all the nice moments between Hiro and Sae in part two there wasn’t much to make the shippers happy. The scenes between them are intimate but platonic. You get more suggestive moments in a part one between Yuno and Miyako that’s more in the carefree spirit of the franchise as a whole. The assignment is drawing their own faces and hands and it leads to close examination of their own looks and each others. Miyako tells Yuno that she’s cute. Yuno is flustered and tells Miyako, no, SHE’S cute. This flusters Miyako, apparently (I say “apparently” because she keeps her head turned away from everyone for awhile and it’s left to two unnamed classmates to remark on her behavior), and the next thing you know Yuno is suggesting a sleepover and they’re sharing the bath. That should keep certain audience members satisfied.

Shin Sekai Yori 7 wraps up the kids’ field trip with a terribly busy episode. From running around to getting their canti back (for all the discussion that scene last week provoked, it was resolved rather matter-of-factly, same with Satoru’s questionable behavior–he’s not cruel or irresponsible at all this week. What are we going to discuss in blog forums NOW?!), they packed a lot in. Last week we had world-building and moral quandaries to consider while Saki and Satoru fled from one danger to another; this week it lightened up on the cerebral stuff and gave us a straight adventure episode, one of those where they at times fumble the narrative so we get scenes which just fade to darkness before another one fades in, as if they momentarily lost track of the story. The most jarring of these was when the fleeing kids are overtaken by the Giant Hornets. It looks bad but when they fade in again Kiroumaru, the GH chief, is towing them to a safe place. Why is he towing them? Because they’re gods? Because Satoru saved them from ground spider treachery? We don’t get an answer. Also, where are they going?

They’re going home. There’s not discussion or dissent that we see. Even though they Learned Too Much and are in danger. It just occurred to me: Saki and Satoru fled the Giant Hornets because Satoru suspected that it’s they who do the killing when humans need to kill, since the death feedback prevents them from killing using their cantus (a rule that seemingly doesn’t apply to killing other creatures). But there are plenty of mundane ways to kill someone; can’t the humans use that? So I’m guessing that they don’t know what danger they’re still in. I mean, they’re home, right? They’re safe! But the show has not yet made it clear just what the powers are that removed the other kids from school. Is the faze-cat doing the adults’ bidding or does it patrol on its own, waiting for something to stray past a barrier?

Those are thoughts for next week. When this week’s episode wasn’t giving us a chase or a confrontation it was giving us a little more dirt on the queerats and their relation to humans. Obviously they consider humans to be gods, and with the cantus it’s hard to argue with that. So Sakoru and Saki take pains to keep their sealed canti a secret. The queerats are divided into tribes and while there is some differentiation by species, a lot of them look alike. While the presence of a queen makes you think of insects the rest of the time they behave like primitive humans. We get types like Squealer and his questionable morality and more noble ones like Kiroumaru. The tribes tend to mistrust each other, even the friendly ones, and if you’re unfriendly you can expect your captured queen to breed slaves. Higher level queerats look on lower level ones just as the kids look down on queerats in general. Primitive and a pretty ugly society, really. Not to mention the fact that if it wasn’t for the canti just about all of the tribes would be all over the human race in a second. It’s an ugly world out there, and I suspect that the show wants us to regard queerats as representative to the human race; compare and contrast, etc.

Did you ever learn so much on one of YOUR field trips in school?

We get a lot of info in Robotics;Notes 5 but little action. Akiho’s brave attempts to bring attention and revenue to the Robotics club hits more snags, even with Suburu along. Meanwhile, Kaito as usual, doesn’t care much. He’s too busy hanging out with Daitoku and trying to figure out who that girl on his screen was. This scene delivers both information and a possible romance. Kaito hasn’t shown much romantic interest in anyone including Daitoku, but the time spent with her checking out urban legend spots and odd transmissions from Russia and JAXA having to do with the ionosphere certainly felt like a first date to me; two young people sharing their interests and feeling each other out. When Akiho finds out she’s more interested than usual (but not jealous, from the looks of it, though she’s so upbeat in general it’s hard to say). And Daitoku has a dark secret!

All well and good, but there’s more fun to be had when Kaito keeps looking with his PSP or whatever it is and actually finds the girl, a sinister staircase, and the first of some files talking about the sun exploding, though the author, Kimijama, may have been referring to past solar activity. NASA covered the information up, Kimijama is fearing for his life, and so Kaito’s stumbled on some conspiracy, or it’s a joke. But Mizuki freaks when she hears the name … What’s interesting about all of this is that the virtual girl, Sister Centipede or Airi, has gone out of her way, as much as an AI can, to contact him, though she won’t say why, and meanwhile, that obviously evil guy in the penthouse is spying on Kaito. Meanwhile I’m wondering if Akiho’s robot hasn’t become just a sideshow story. Who knows? It’s like last week. They keep tossing out all these tempting story angles but they’re not doing anything with them yet.