I suppose they felt to explain the reason for Rikka’s delusions in Chuunibyou Demo Koi ga Shitai!, but part of me wished they hadn’t.

The show could have gotten along just fine without giving Rikka a Tragic Event to hide from. Yuuta didn’t have one, Sanae, as far as I know, didn’t have one either. You could argue that Rikka should be outgrowing hers, but people mature at different times. They could have kept this as a silly, fun series all the way through. As it is, it’s still fun, and they’re doing their best to present the sad backstory in keeping with the general silliness, but we’re in danger in lapses into bathos and that worries the fun. Well, the other members of the gang (who ALL have time during their precious summer vacation time to take the trip, not that I’m upset about that) manage to keep things going. I find gags about trainsickness, well, sickening, but that’s my taste and there were some good bits in it. But at the same time we had Rikka being quiet and moody, throwing a shadow it all.

And once we get to the grandparents house the mood just gets worse. The grandparents disapprove of Rikka’s behavior, Rikka mopes in her room fiddling with a shortwave (which we don’t get into. Maybe next week), and even the beach scene is cut short by Rikka wanting to take Yuuta somewhere. It doesn’t help that the continuity gets confusing here. Tooka says to follow her and the next thing you know Yuuta and Tooka but not Rikka are at the father’s grave. Did I miss something? Later, Rikka gets Yuuta’s help to escape to the “ethereal horizon,” where she claimed she saw her father after he died, and Tooka tries to stop them. Rikka is delighted with Yuuta; Tooka obviously isn’t. Why did she invite him? Whose side did she expect him to take? And at the end, with Rikka and Tooka squaring off for another battle, itself an excellent way to work out the situation, I had to wonder just why they had kept the news of the old house a secret from her. She could see the grace, but not the house, or lack of one? If she’s been running from reality all this time it seems they’re helping prolong her delusions by not letting her see this reality herself, not even forcing her, but allowing her to go. It would have been hard for her but it would probably speed up the healing. Yuuta is really the hero here for helping her escape; judging from the other family members’ attitudes she had been waiting for someone to take her side … Well, it was a good episode anyway. As I said before, it mixed the silly charm with the deeper issue well and I expect that to continue next week. But I still wish there wasn’t a deeper issue to work with. 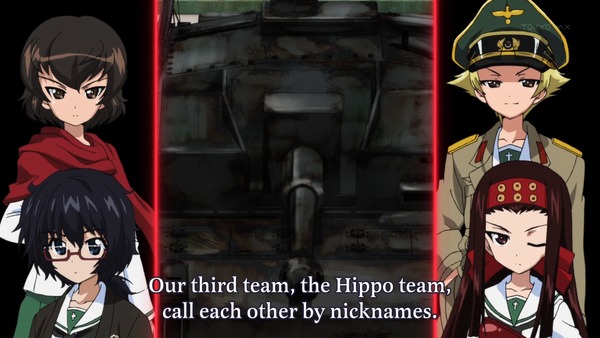 Girls und Panzer, er, 5.5 is a recap episode too early in the season. Production issues? Well, it’s a good way to get up-to-date with each team and learn how to tell their tanks apart. Since there’s no plot to advance I decided to use a screenshot of my favorite team. Honestly, why the other teams don’t dress up I don’t understand. Volleyball uniforms don’t count.

The characters in Teekyuu and Lychee Light Club both want to go swimming, but it’s raining.