Well, those scary men in suits and black dress girl, that supposedly signified the convergence of plot in Robotics;Notes, was a ridiculous red herring.

I can see Akiho’s dad trying to help her out, but to get a bunch of goons and black vans was going overboard for this unassuming guy. Not only that, but once they were taken away they just wound up in JAXA along with Furugoori (meaning they had to use stealth) around a table we’ve seen before, and the black dress girl, Nae, returns not even wearing the dress any more. What was the point of the masquerade at all? So instead of a dangerous situation involving international conspiracies and mysterious ringtones (and was it just coincidence that the phones rang just when the vans showed up?) it’s JAXA, well, Akiho’s dad, trying to help her kid out, and we’re back to “plucky kids try to build a robot for the big tournament.” What a letdown! 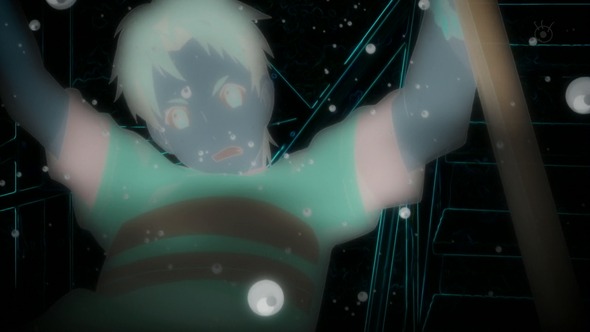 When we do get back to the bigger, scarier picture, we find it bubbling under the surface for now. Airi/Sister Centipede gives him the conditions for finding the second Kimijima Report. Most of the conditions are ridiculous, including the way Kaito goes about meeting them. He’s completely oblivious to the fact that there’s a typhoon coming and that opening up that dome would expose the antenna, on the other hand, at least there’s something story-wise happening. Nearly getting himself killed, rescued only by his time-affliction, was frightening while it lasted but nothing came of it, apart from Akiho learning about Airi, and Airi saying she makes sure the antenna broadcasts a signal. As a more practical matter for Kaito, he does get the second document, but he makes it way harder for himself than he could have. The document itself has frightening information about the Committee of 300 and the “Human Domestication Project,” but since Kaito falls asleep reading it I don’t think he’s too concerned, even if we are. This is an odd show. I’m no longer taking bets on when stuff will actually start happening.

Hidamari Sketch – Honeycomb 9 is crowded with gags about previous seasons. If I hadn’t watched them I don’t think I would have enjoyed the episode as much as I did.

It’s time for the landlady to show up and mess with the girls a little. She won copy “Game of Life,” gives it to Yuno because she’s too old for it, then stays and plays with them because, well, she’s the landlady. They soon decide that the game isn’t realistic enough for them and so they get out their brushes and paper and create a new, Hidamari Apts version of it. Making and playing it takes up the rest of the episode. No half-episode stories this week. Most of it is good fun, not least for the visual riffs that SHAFT got to do with an iconic game. That spinner, those little cars with the pegs in them …

They replace squares on the board with things they’ve experienced since moving in. So we get references to the welcome party, that sculpture, crabs in the cafeteria and the ones Miyako won, etc. (and even apart from the game the show piles on more references: “love and piece,” running tofu, so you can’t use the fact that Nazuna and Nori don’t know them either as an excuse) and the only reference new viewers would get is the onsen. I don’t mind remembering about those old episodes but as I said, new viewers won’t know what they’re talking about. It also bothers me a little because it’s self-celebratory. However, there were some original bits. Nazuna’s “talk like a cat” square, which Sae lands on just when Chika calls, was the highlight. In the end it gives the girls a chance to think about the future and their dreams, and for the landlady a chance for encouragement tinged with regret on how SHE turned out. Good episode, but I could use some fresh material.