It’s still the same; I won’t have the time to do the near-daily posts about way too many shows that I used to do, but I might choose a couple to write about.  Also, I can’t resist giving you all my opinions about the new season, well, at least some of it.  In small doses.

It’s not off to the most auspicious start, is it?  First, what’s up with all these little shows?  We started with an Osaka girl that feels like a crudely animated documentary rather than a comedy, then there was an iDOLM@STER spinoff using cute little versions of themselves, which is passable, then there’s a girl afraid of heights being dragged mountain climbing, and the best title of the season (Mangirl!) … I mean, how many of those microseries do we get this season?  Every time I sat down with a new show it was no longer than five minutes long.  What’s more, Teekyuu was faster and better than any of them. 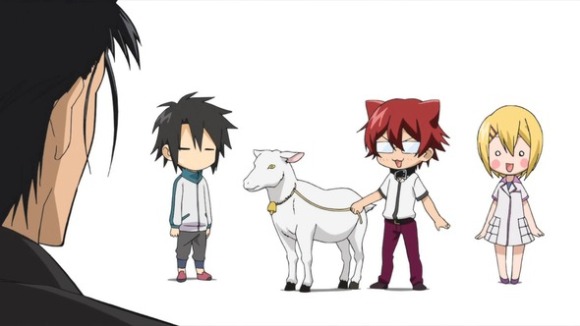 Finally, something longer comes along.  Cuticle Tantei Inaba is about a werewolf-police dog turned private detective with a hair fetish, or something.  A goat named Don Valetino keeps robbing banks so police detective Ogino enlists Hiroshi (the werewolf) and his two assistants Yuuta and Kei to nab him, and it’s all an excuse to string together as many gags as possible while Kei (straight man) shouts out reactions.  I can handle a little of this type of humor but 3/4 of the episode went on like this until I was too worn down to care.  I said I wanted something longer but this episode seemed twice as long as it should be.

Then there’s Maoyuu Maou Yuusha, where an epic war between humans and demons has been raging for years, and a hero has set out to finish it once and for all by battling the demon king.  The OP sequence after this introduction shows countless characters in the field or doing court-intrigue things, and I despaired at all the name memorization and scheme-analysis I’d have to do, but the show quickly shifts when the hero discovers that the demon king is a sexy redhead showing a lot of cleavage.  And she’s delighted to see him.  The hero, being a hero, is completely flummuxed, and there follows a lot of talk about how this war is sustained by special interests on both sides to keep parts of the economy (their parts, of course) afloat.  The hero, being a hero, understands little of this, so the demon king explains for him (and presumably for us); meanwhile we get shots of various people either happy or miserable about the war, to illustrate her point.  An idea of an epic fantasy story where enemies are trying to end a war rather than kill each other is very tempting, but I wasn’t crazy about how ep1 was put together.  The king does too much explaining while the hero fights with his own worldview and panics whenever she gets too close or leans over, which is often.  And in the end he’s convinced to take her quest for peace and make it his own too easily.  When did he make the decision?  Why?  But I can’t resist the premise, so I’ll give the show a chance.

AKB0048 returns and it’s as daft as ever.  Starting with a dream sequence involving stairways to heaven collapsing along with the idols running up them, the show wastes no time in lobbing strange, bright, silly visions at us while also developing the plot (the General Elections and Center Nova position return, putting the girls in a tizzy).  And there’s the constant threat of the no fun galactic government.  The two are combined when Yuuko announces to everyone that they’re all her rivals for the CN and then rescues three of them when captured and put on a show trial.  It’s all cute and blinding, just as before.  I liked the first season well enough, but even if I do watch the new one I don’t think I’ll write about it here.

2 thoughts on “I glance at the new season, except all those really short shows.”