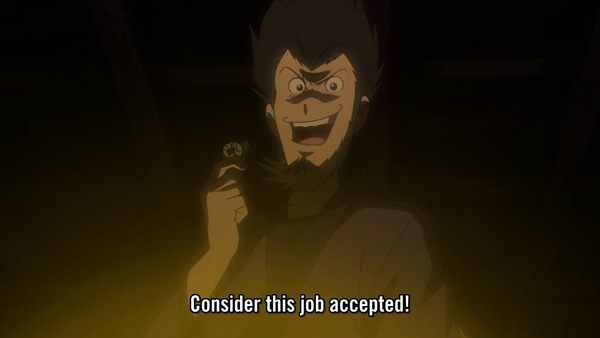 First we have Bakumatsu Gjinden Roman, a bewildering series about Roman, a lazy but dependable “helper” by day, a Robin Hood stealing the money from corrupt nobles at night. In the first episode the evil local lord or whatever comes up with a plan to extort protection money from the people by scaring them with random sword attacks by strange people. This is after Roman has stolen his last batch and returned it. He has a gang helpers, the doctor, the mad scientist, the shrine maiden (huh?), and a perky dog. Oh, and his sister Koharu, who tries to keep him in line. To make things weird, Roman has weapons (designed by the mad scientist) at his disposal that don’t look very 1800s, like rockets, planes, and even a superhero suit, things he uses once and apparently never again, as useful as they might be in other situations. And Monkey Punch did the character designs. In fact, they’re obviously playing up that angle; the first scene might have come from Lupin III. I wasn’t crazy about the first episode; the conclusion was too pat, but I’ll give it the benefit of the doubt and try a few more.

Then I watched Gdgd Fairies 2.

What the hell is this? Looking at Random Curiousity’s preview it apparently has voice actresses (playing fairies) ad-libbing and some crappy CG built around it all. And apparently the humor should be good since the fairies start the second season apologizing for the first season and saying they won’t rip off any more existing shows (then they proceed to do a Lucky Star intro), which wasn’t really funny because you could see the joke coming. But some of it works. I liked the bit about pronouncing “deja vu” the most because it probably wasn’t planned, just two of the actresses going off on a bit. Other bits get surreal and often disturbing thanks to the CG. I’ll happily watch this again. Besides, it’s only 15 minutes long. But when was season 1? I completely missed it. 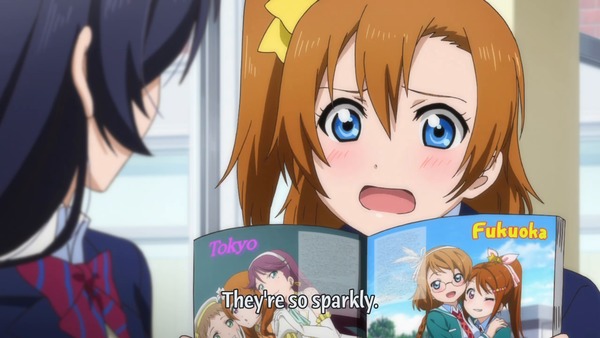 Love Live! School Idol Project looked to be a quick rejection. Another idol show? Who needs it? So, confident it will be the last time I view the series I sat down to watch episode one … and sort of liked it. it’s not great. Basically, a high school’s going to close down because of lack of new students, so genki, dumb Honoka tries to think of ideas to attract some. Aha! Idols! Other schools are doing it! Never mind the idea of building up such a club and tradition when the decision to close has already been made is impossible, she’s going to do it anyway! She and her friends Kotori (happily) and Umi (reluctantly). That’s still not much to recommend the series, I know. But there’s some intelligence behind the show. Information is introduced smoothly and with no stink of exposition, from Honoka’s family to a nice bit where Kotori and Umi talk/bitch about being dragged along on Honoka’s adventures, while we get an unexplained flashback at them climbing a tree. Sure, it looks like the story will be routine, but there looks to be intelligence behind it. Worth a look.