Sakurasou no Pet no Kanojo 21 and 22 set things up predictably for an unpredictable finish.

In episode 22 the gang pretty much exhausts their ways to save their dorm. Each day they get a dose of energy from somewhere (probably Misaki) and go out again to get signatures, even though they know they’re going to fail. And, to fully set the mood, the last day to petition is dark and rainy. The perfect setting for Aoyama’s breakdown in class and subsequent discussions with Sorata about being a failure, out in the rain, and in the infirmary. In the middle of this, Sorata gets a happy phone call about HIS failure. The show just decided to drop all the big failures into one episode, just to make the expected comeback feel all the better, I guess. I dunno. I’m annoyed that Sorata is sticking himself in the failure bin when his project passes one test and falls to an undoubtedly expensive vocaloid project in the next. No shame there. Also, it’s not like he’s got no other options in front of him. He’ll make another game, is all. They keep talking about how hard Mashiro works, but she’s been at it for years. I’m not sure Sorata gets that. But it was especially cruel for the game company to offer Mashiro a job, the perfect end to a perfect day, I suppose, and it prompts the plot because Sorata can’t keep in his frustration.

I say unpredictable because how the hell are they going to save Sakurasou, anyway? Oh, they have the rich producer option, I guess, but Chihiro tells him they won’t have to use it, meaning they won’t. Also, why? The episode takes care of a fundamental misunderstanding or two or three Mashiro has, that “Sakurasou” was the building itself, that she was not a part of it, and that Mashiro must hate her. She’s thought that last one before, so we’ll skip it. All it took was a train-station shouting scene to set her straight. The second one, summed up nicely by that painting, sums it up nicely, her love for the people and the fact that she’s not one of them, though this could simply be the artist distancing herself from the subject. But on the other hand, Sorata is right. The picture isn’t complete without her. 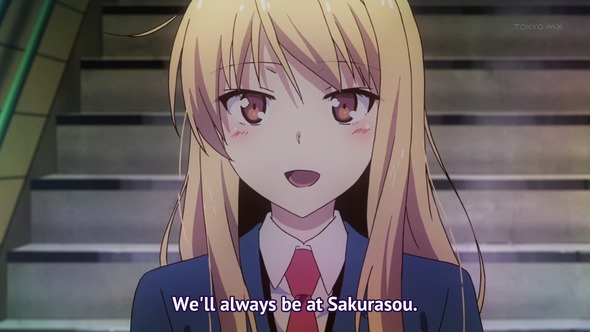 As for that first one, Sakarasou being destroyed. Even if they do save the building (and they will, we just don’t know how), let’s not forget that Misaki and Jin are graduating and Aoyama is leaving school and would be leaving even if she had passed the audition. So it’s interesting that we learn only now that the producer used to live there. The final point I hope the show makes is that “Sakurasou” is an organic, changing collection of people. Some people graduate, others will move in. Actually, I just had a thought that someone should buy up the land and make the dorm like Hidamari Apartments, where the arts department oddballs live.