Now that many of the season’s shows are wrapping up, I thought I’d give thoughts about the ones that I actually wound up finishing but haven’t written about much, or at all. I polished off RDG last week, so I’ll ignore it here.

For me, Hataraku Maou-Sama! never got past the question of how such a wicked demon lord could be so decent here? If he behaved like an overlord on Earth with no powers, he’d wind up in the pokey pretty quick, I know. But in times when he got his powers back he was still a decent fellow. Even Emi doesn’t believe it. The show gave no reasons for it. It makes me wonder what his upbringing on Entre Elba or whatever the place is called was like. Well, when I do ignore this I found the series hit or miss. Scenes when they were setting up stories seemed to take forever. I don’t know why, but Emi’s hesitation over what to do with Maou got on my nerves after a while, but I liked her cynical side. The big scenes were usually fun. The show was good at tossing in a quick line or sight gag when things got too serious. Chiho, a young girl in love but not a blithering idiot about it, was almost always fun to watch. I almost wish she had some powers of her own so she wouldn’t have to get rescued all the time. The whole Entre Elba world was a bunch of ridiculous cliches, but that was the point. Umm, I’ll give it a B-.

I think I would have enjoyed My Teen Romantic Comedy SNAFU more if I had paid more attention. There were some good things in it. Hachiman is an interesting character, a high-schooler whose default mode is bitter, but much of that is a pose and he knows it, perhaps causing his guilty, shifty appearance, like he can’t look anyone in the eye because he’s afraid they’re on to him. Yukino never panned out for me apart from being a good foil for Hachiman. Yui was an ideal counterbalance to the other two, perhaps the only one around who sees how cruel and manipulative others can be, but aware that people don’t have to behave like that, or succumb to bitterness when people do. The show was often painful to watch because of Hachiman’s worldview, especially in the cultural festival arc when he deliberately becomes the most hated man in school to prompt another student to do something she doesn’t want to do. As more that one character tells him after that, his ploy worked, but he hurt himself doing it; please stop doing that. The trouble is, Hachiman doesn’t have any alternatives in his arsenal. Not bad. I’d watch a sequel.

I paid even less attention to Oreimo season 2. The only affecting part for me was the Kyousuke/Kuroneko romance, where for the first time I wanted to strangle Kuroneko. In fact, the entire season seemed to be Kyousuke shedding girl after girl and winding up with Kirino as … whatever the hell she is to him, but even as I say that I remember episode 12, where they all show up to the housewarming party and it occurred to me that Kyousuke actually has a harem, or could have. And maybe later he’ll get some of them back. The finale is all flashback through Kirino’s eyes, and we get a better idea of this complex thwarted big-brother worship that has messed with her mind since nearly infancy. It’s a not-bad, kinda-sweet way to wrap it up, and reminds us that this whole incest thing was just teaser, and when you look beyond that, there were some interesting characters on display here.

Namiuchigiwa no Muromi-san came and went. Most of the humor, especially the tit-ripping scenes, didn’t do much for me, but I liked how they didn’t try and make Takurou a romantic partner (except in Muromi’s eyes, of course). A lot of nice visual moments. The final episode was more introspective, first with Takurou agonizing over his life-goals questionnaire and Muromi getting him to literally chill out, followed by a “bring all the cast together one last time for a celebration” scene, a nice way to end things. Don’t think we need another season of this, though.

As I wrote before, Yuyushiki went from a series that did nothing to me to one I enjoyed watching every week. It was also, believe it or not, one of the most difficult. Yukari would pluck something out of the ether in her brain and present it, then Yuzuko would grab it and run in random directions, playing word association with herself or Yukari, all to get a rise out of Yui. I had to listen (actually read) closely or I’d completely lose track of how one line related to another. Sometimes one of the other three girls would stop by and give us their own, weird, contributions, which required more concentration. Slice-of-life shows about high school girls doing nothing aren’t supposed to be a challenge to watch, but I enjoyed it. In the rankings of such series, I put Yuyushiki above average, that is, closer to Azumanga (the pinnacle) then to A-Channel (the depths).

Finally, another slice-of-life show, Aiura, that did itself no favors by being so short. Some characters, like the teachers, are introduced but hardly seen after that. We’re left with little scraps of scenes that suffered from the lack of context but were still strong enough that you paid attention until the episode was over a minute later. My favorite bit was Saki talking to Yukon’s little brother. It had some “I’m older and bigger than you” bullying in it, but you also got the impression that the two genuinely like each other, or maybe they share a bond of frustration over Yukon. I’d like to see more of this, but how about actual half-hour episodes? One more thing, watching it on Niconico gave you an additional 1.5 minutes of animated weirdness that had nothing to do with anything, then a slide for the series with the OP chorus in a loop: “Kanikanikanikani-KaniKanikanikani-Kanikanikanikani …” The only way to watch it, apart from the lack of subtitles. 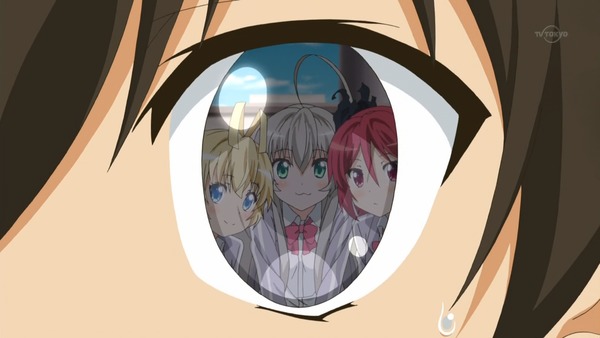 Haiyore! Nyarlko-san W wound up pretty much the same as the first season. The finale, a hastily-constructed crisis about a hastily-constructed robot that will replace the goddess girls on Earth, so they’ll move on to other assignments on other worlds, went fairly light on the bathos and worked up the silliness, which is the way this show should alway go. There’s no reason for another season of this, but there was no reason for the season we just got, either, so I’ll probably watch it. Besides, I like the voice talent a lot on this show, especially Kana Asumi and Miyu Matsuki.

There, I think I’m finally done. I almost forgot about Narlko.