Though I’ve been writing about a handful of shows this season, I’ve been watching a few more. Of the ones I dropped, I’d like to apologize to Silver Spoon. It wasn’t bad at all, but I somehow got stuck way back in the pizza-making episode and eventually realized I’d never get around to finishing it. Maybe later. 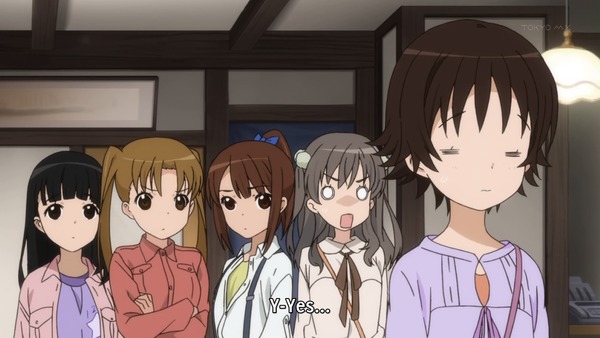 The first to finish that I watched was Tamayura–More Aggressive. I understand the word means something different in Japanese; this show, the least aggressive in anime, couldn’t possibly be using it the way we do. Throughout the second season it kept it’s slow, steady flow going. Quiet moments looking at beautiful things or moments, while reflecting on other moments, with light ambient music and nature sounds to listen to, and every few minutes, you might get a joke. Enough to drive many anime watchers crazy, to which the show might reply “Oh, I’m so sorry. Have some plum chiffon cake with herbal tea with yozu and leek.” 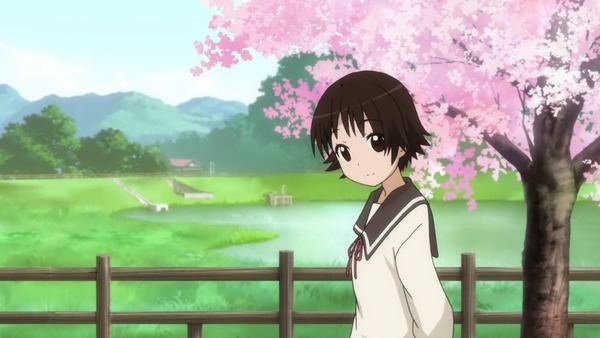 The second season had its moments, particularly in the final two episodes. Episode 11 almost felt like a finale with its reprise of the We festival and New Years (both in one episode!), and #12 brought Yuu’s mom out of the relative shadows for a reconciliation and thank you scene where neither was truly necessary, but appreciated. But elsewhere the show seemed to get stuck in its slow routine. The other girls had no episodes of their own. They got maybe two moments per episode where they could do their bits and then step aside so Yuu and Kanae, the new girl, could take over. Kanae never really did it for me. In spite of her cute introductory scenes, she never seemed to develop a personality of her own, apart from her habit of repeating phrases when she was unsure, which I got tired of by episode four. Yuu, on the other hand, without any obvious pointers, became more mature. I noticed about midway through the season that she seemed to walk around with more assurance, camera in hand, as she continued to handle the tragedy of her father and move on. More aggressive, no, but more confident. This almost invisible progression, plus what little bits the others were permitted to do, kept the series moving at the times when it threatened to get stuck in an emotional rut.

Then I polished off Kiniro Mosaic … I’ll give it a C. I was surprise when the show shifted to the story of Alice and Shino, east and west, etc, to a more typical gag-format format. The show’s best move was to make Shino an idiot. For all her talk about becoming a translator she doesn’t even try to learn the language, and her preoccupation with blond hair made her come off as borderline crazy. That worked very well, especially with Alice’s devotion to her. The other characters weren’t bad. I liked Karen and Yoko, and Aya’s shy interest in the latter. But the gags often fell flat. I’m not the only one to notice that all the girls here, apart from Yoko, don’t act like high-schoolers. The show could have put them all into middle school and no one would notice the difference, apart from it feeling more natural. So when they’d do a silly joke or react in a stupid way I kept wanting them to act their age. But it ended well. Shino tells a nice little fairy tale that uses all the characters to their advantage, a cute way to end things. I’ll say that for this series: it’s cute as hell. But I like laughs along with my cuteness, and this show didn’t deliver enough of those.

Love Lab isn’t as cute, but it wasn’t trying to be. And it was a much more successful show. I noticed it early on, when they were working Sayo and Eno into the plot. The conversations were good and funny. They were keeping the story going, defining these new characters and their relationships to the old ones while tossing in gags at the right moments. What’s more, each character was well-defined. With other shows, like Kiniro, it didn’t really matter who said many of the lines, but in Love Lab you’d never hear, say, Suzu say a Sayo line. And they interacted well. I could enjoy a pointless love-lesson scene as much as an overarching plot moment. A good thing, too, since that plot (Riko trying to bring herself to confess that she wasn’t a love expert) got tiresome really fast, dragged on to the final episode, and then they had to drag the scenes leading to it on forever, when all we wanted is for her to say the words, Maki to forgive her, Riko to start bawling, Maki to start bawling … which is exactly how it worked out, after pointless “dark” scenes which did nothing at all (with more good gags bobbing to surface for us to cling to). Well, it’s out in the open, and Riko was justly punished and forgiven. I hope that doesn’t mean there won’t be a season two. These characters are strong and funny enough to handle other plots, and I’d like to see them.

2 thoughts on “Finales to shows I didn’t write much about, pt. 1”