I watched the underwhelming first series of Yozakura Quartet when it came out, thought little of it, except in episode one when Kotoha first did that electric-tongue thing. I was fascinated by that moment, that wicked expression, sticking out her tongue, then the sparking. Maybe a fetish I didn’t know existed … So in this reboot, -Hana no Uta-, I waited for her to do her trick.

I dunno, it’s not the same. This new version of the franchise is more simply drawn, a little cuter than before, which is not a bad thing. In fact, this and the improved animation feels more appropriate, closer to the OVAs, than the first. As for the episode itself, it decides to reintroduce all the characters and give them a little crisis (giant bouncing goldfish, conjured by that smug glasses guy) in order to show us what they can do. Apart from the more fanciful, colorful, fluid style, everything is familiar. Hime is less overly-serious than before, and I miss that, or maybe they’ll let Kyousuke handle that end. Fun to watch, nothing special. I’ll keep watching, and see if Kotoha has any better tongue moments.

I found Meganebu nearly excruciating to watch. At first, when the club’s hero (never got his name, showing you how much impact he made on me) is giving a speech from the roof about creating x-ray glasses to the rapturous (all-male) crowd below, I thought this show was going to go surreal and stay there, so I would forgive the blinding color scheme, but this turned into a fantasy sequence … and the psychedelic colors remained. The four members of the Glasses Clubs turn out to be blithering idiots of various types, and as I watched with growing annoyance at their idea to create x-ray glasses to peek at the body of the eye doctor and her assistant when they visit the school, even though it’s established early on that the optometrist is male. No one seems to notice. All the characters are annoying except maybe Hayato, whom the others find annoying. There are odd pauses in the middle of conversations that suggest that someone making this was asleep or they didn’t have enough gags to stretch, not that I found any of the gags funny anyway. I’m not saying you shouldn’t watch, but be warned.

Walkure Romanze stars eventual harem lead Mizuno, a former knight-in-training who got an injury and had to drop out. Now he’s training to be a begleiter, helping the knight students (who are all women) be better knights, rather like a squire, I suppose, though the definition of the word begs for other interpretations, especially since there are at least two girl-knights (the statuesque and popular Celia and the more down-to-earth Noel) who ask him to be their begleiter for the upcoming tournament in this episode alone. As for Mizuno, he seems to only be interested in horses, especially Sakura, who manages to bite off two skirts this episode. Not Celia or Noel’s, but rather those of Celia wannabe Bertille and lead ditz Mio. Because of this, Bertille challenges Mio (who’s not even a knight) to a jousting duel, and so we have our first story arc. Yes, it’s all ridiculous. It gets some points for little moments, like Akane going into a trance when she thinks of Celia, and of course Sakura the horse livens things up. Otherwise … nah. 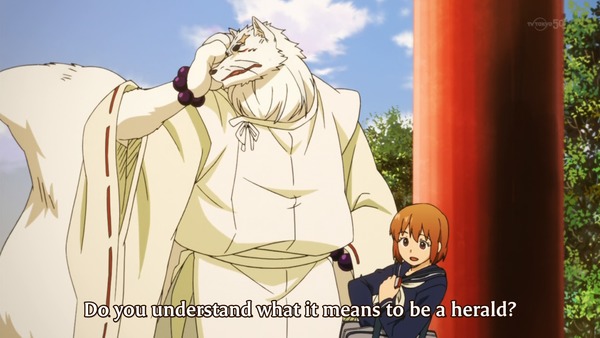 I don’t know if I’ll follow Gingitsune or not, but there was nothing wrong with the first episode. There’s a lovely opening at a shrine’s priest’s funeral, where the four-year-old Makoto the heir, splashing about in the rain, sees an odd reflection in a puddle, looks up, and sees Gintarou, the shrine’s herald, for the first time. He’s huge, and has a frightening, canine face, but he’s also furry and doesn’t act threatening at all, simply intrigued by this little girl staring at him. We jump to the present, Makoto in high school, still the only one who can see Gintarou, and we have a little story where they have spat over a fortune gone wrong and a missing cat. Gintarou could be a good character. “Gruff and lazy,” says Makoto, also dignified and a little dangerous, seemingly put-upon by this young girl, yet obviously fond of her. Meanwhile, Makato does her best with the demands of the shrine and friends (or non-friends) at school. Judging from this episode the stories we’ll get might be a little too pat and sweet, but that won’t stop me from watching for now.

I’ll probably pass on Unbreakable Machine Doll. Our hero, Raishin, and his cute robot, Yaya, enter a prestigious academy to get revenge on somebody, but their scores are so low they’ll have to fight their way up to get a pass into the big tournament to win and attain the title of “Wiseman,” or is it for the revenge? And then, after picking a fight with Charlotte Belew to get her entry into this important tournament, to get the title or revenge or whatever, did he just attack the guy the moment he saw him? Oh, well, some of it was good. All the students are potential killers of every other student, so they do a nice job bonding Raishin and Charlotte when others interfere with their own agenda. Yaya’s good fun, saying the wrong thing at the wrong time and trying to get into bed with Raishin. Also, she fights so well you wonder how the two could manage scoring second-to-last in their class. Charlotte’s little/big dragon isn’t bad, either. I think he’s smarter than the rest of the cast combined, apart from teacher Kimberly, who’s up to something. Not a bad first episode. I like the magical Victorian world, but … well, we’ll see.