Last week’s Monogatari SS, with that beautiful artwork panning by why Shinobu gave a rather sad monologue about part of her life and someone she met, and how they were pulled apart, felt elegant and dignified. As for this week: 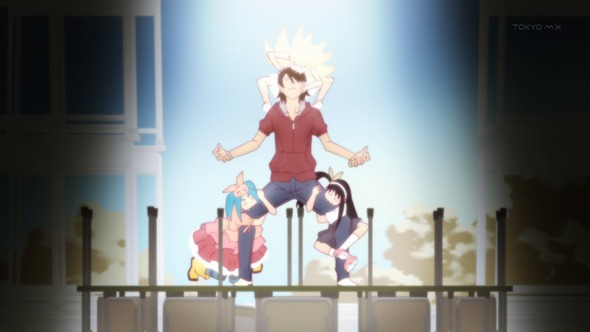 While we get back to the worrisome plot in episode 19, the whole thing is made livelier by Ononoki, Shinobu and Mayoi being in the same room. Araragi, the old pervert, considers it a dream come true, while we watch with big smiles as three of the oddest characters in the entire series go at each other while they try to figure out what to do about that void. My favorite bit must have been when Mayoi comes to and starts ordering the other girls around, and they actually obey her–for a moment. But the girls biting Araragi wasn’t bad either, or how one will start giving a speech while the others strike poses and more or less freeze. A lot of fun to be had in these scenes.

Alas for our fun, the void returns, and while Ononoki transports them away again, it seems that the spiritual link between Araragi and Shinobu has been broken, which presents us with something interesting for the plot, as in order to rescue her from wherever she is they may have to confront the void, rather than running from it. But it also must feel very sad for Araragi, since he’s at least temporarily lost a part of his soul, not to mention a lot of his super vampire powers. I, for one would feel very bad about losing the vampire girl who hung out in my shadow and took baths with me. I guess we’ll have to see what that girl who knows everything who isn’t Hanekawa says about it.

In Galilei Donna 5, the hunt for the latest sketch is more of an excuse for the girls to interact with people in a town in the Netherlands which has been cut off from the main supplies of fuel, I suppose because it isn’t efficient for them to lay pipes or something. Anyway, we meet Ludger, who leads a pack of rebels, and thus we get a nice, dull moral battle from him and Hazuki. Meanwhile, Hozuki befriends a boy named Theo, a fellow gadget freak, and later his would-be girlfriend Karen. It’s all rather lighthearted for too long, so you’re just waiting for the tears to flow, and they do near end, but only after Ludger had decided to sell out and doom everyone to certain death. This was so unbelievable, such a complete turnaround for the character, without a hint of foreshadowing that it pretty much pulled the rug from other the tragic events that happened after. A shame. Theo and Karen were decent characters who deserved better.

Coppelion 6 continues the show’s trend of having interesting things to say, along with a compelling setting, and screwing it all up with the action. In this episode we once again wonder what the hell Aoi is doing on this mission in the first place, as she goes out of the sanctuary and immediately gets captured by the 1st Division, who apparently want Coppelions. They don’t explain why, so it’s intriguing … but you know the reason will be inane or trite. Then Ibara, of all people, proves to be as stupid as Aoi, falling for that “Go ahead, shoot me!” line and getting blindsided by a different soldier. Later she nearly gets caught again because she has apparently forgotten everything she once knew about hostage situations, or combat. 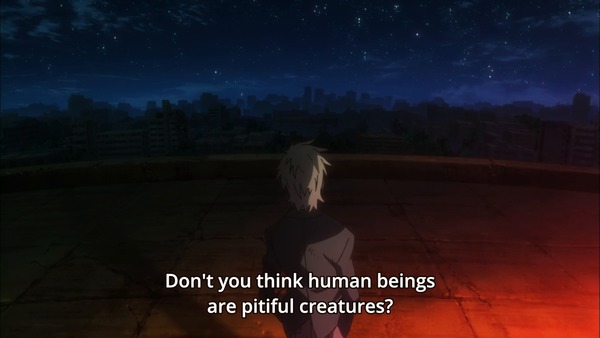 The interesting bits come from the leader of the “Planet,” who both rails at the society that put him in that situation and then abandoned them for fifteen years, and supports the girls in whatever they do, and at least isn’t as stupid in combat as they all seem to be. Haruto, the Cleanup Crew guy, isn’t the sharpest knife in the drawer, either, but he gets to force home the concept that he and the other Coppelions were raised and used by the same society who made this mess in the first place, a position which works well against Ibara’s equally strong faith in humanity, even when it nearly gets her killed. As I said, there’s some nice stuff bubbling under the surface here, but it’s being so badly handled I don’t really care too much.