Another work-related trip coming up, so I won’t be updating until next week. So here’s what I’ve got at the moment. 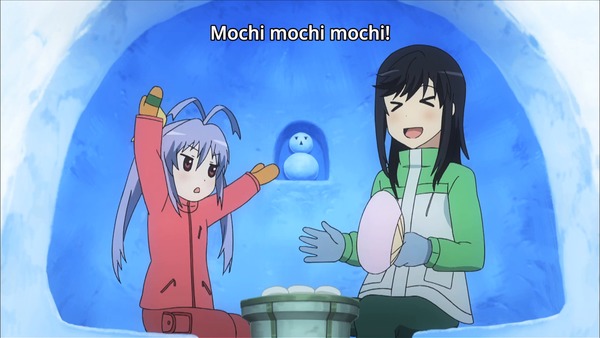 Non Non Biyori is again marred by Komari and Natsumi acting like idiots when they’re with each other. The competition to sleep in the last futon when the girls are stuck at school overnight because of a snowstorm had some good moments, like Renge’s reaction when Hotaru imitates her, but their reaction to watching Hotaru in the field late at night was just ridiculous. Geez, Renge is smarter than they are. The second half has everybody skiing, though apart from Candy Store, none of them actually know how. I found the last part the most satisfactory, making a snow house and cooking mochi on it and eating it with soup. The conflicts are minor and everyone has fun.

Meanwhile, Teekyuu ramps up the excitement by beginning the NATIONAL TOURNAMENT ARC! How will they do in the first round?