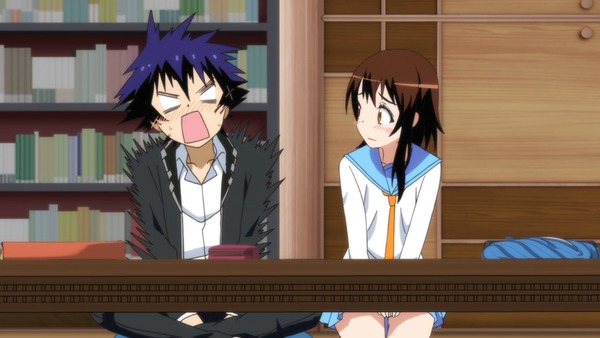 I can’t say a lot about Nisekoi 4 except what I’ve written before, which is that this is a perfectly good but inconsequential and routine highschool romcom that’s getting the Shaft treatment. Once again this episode they stick to the style they’re known for but don’t forget that the show’s a comedy. And they must have worked very hard to give this story about a study session at Raku’s place, with extra side characters to introduce, followed by the old “lock them in the shed” bit, any sense of new life. They really can’t do much to spice up the shed bit, no room for wide camera angles after all, so we have to hope the conversation Raku and Kirisaki have, you know, the actual story, is interesting enough. Mmm … not really, though I was a little surprise when it just then dawns on Raku that this blond gorilla is hot. The study scene works out better because there are more characters to mess with, though there I was getting annoyed at Raku’s sheer panic at Onodera being there. As for the new characters, Shuu has already proven himself to be annoying, but Ruri, Onodera’s best friend, has some potential as a meddler.

Nobunagun 5 has a mission in it where nothing really goes wrong, so it’s mainly devoted to introducing Sio and us to the other platoon members. They’re all a cheerful, slightly dysfunctional bunch, both devoted to their jobs and a bit smug about their abilities to do it, though Jack is the only prima donna of the group. There’s talk about how the e-genes affect personalities, but when you have guy with Gandhi genes putting moves on poor Sio you have to wonder if that’s true. Also, Newton keeps french-kissing everyone. Amusing character details aside, we watch Sio get teased by everyone there, but not in an unfriendly way, and we get some idea of the pecking order. It’s all routine, Sio has little to do but react until the mission comes. The late discovery feels far-fetched (the speed that it happens, not the concept), but it doesn’t bode well for the heroes, or for HUMANITY ITSELF! Sio didn’t get her evil grin on, so it’s a weaker episode.

In Seikotai Yakuindomo Huh this week: Kotomi sends the wrong picture to Shino. There’s bits about keeping hydrated, the joy of curry, help with a speech, then Hata investigates a rumor she actually started. They speed through some jokes from the manga that they had skipped, and I can’t tell the difference. Hata cons them into modeling the new school swimsuits. Then they can’t go home until dark because it’s raining. Tsuda can’t decide what to have for lunch. Then some time with the judo club, which trains hard, until a cat steals one of their towels. We’re distracted by cat business until nearly the end, when they have a have a big send off for the judo club’s competition. Then they hawk some gymware. Typical episode. As usual, the reactions are as funny as any of the jokes, when I can understand them.