Space Dandy 6 wasn’t bad, but again completely predictable. You knew that Dandy and Meow would manage to talk the two aliens to the bargaining table, and you knew the two aliens would find an excuse to fight there. The fact that this all could be avoided if Dandy or Meow had a lick of sense and maybe had spare garments prepared was annoying, but their lack of sense happens every week. I shouldn’t be complaining that a silly SF concept has silly characters, but the creators could be smarter about it. The show’s good ideas are being wasted. For instance, we had the aliens killing each other, first with ray guns, and then when those died out, with bigger and bigger rocks, to a sort of logical end for not only them but their respective races. But that good scene came after a painfully dull bit where they try on each others clothes. And all the good bits can’t make up for the episode’s biggest problem: the rival aliens both had to say more or less the same thing to their respective captives/buddies, meaning we had to hear the same information twice, over and over, through the entire episode. Even predictable business can be saved if they add something fresh to it, but it rarely happens. The surfing bit at the end was pleasant, but by then I was past caring. 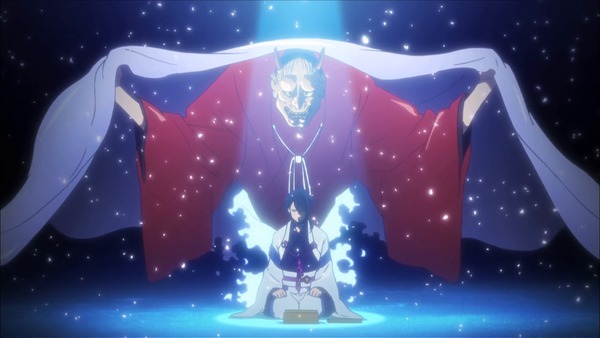 I had heard that Nobunaga the Fool 6 was a bad episode. I wouldn’t go that far. It did have a lot of people grumbling in it, perhaps too much, since everyone had to state their opinions about what an ass Nobunagais, or make nefarious plans concerning his downfall, with at least two different people in different conversations. And it leads to Jeanne going off in a huff only to stop and watch the fool half naked, screaming under a waterfall, before the assassin showed up and killed the character I most enjoy watching in the series, and it isn’t Nobunaga. Meanwhile, down goes Nobukatsu at the same time, but the bigger shock was who was doing it and why. Poor kid. Well, “Why can’t we be friends” doesn’t seem like the most practical mindset for a ruler in that place. So, apart from the guns going off, it was a subdued, no, dull episode where little happened. At least we got a murder or two to liven things up. Trouble is, that means more funerals next week.

While Space Dandy isn’t living up to the hype, and with the luster coming off of Nobunaga the Fool, I wonder why it is that I enjoy Bouraku no Zvezda as much as I do. This week’s episode, where our evil heroes try to discover the identity of White Robin (win a medal!), had some of possibly predictable scenes of its own, but somehow the show manages to sneak out of it with a clever or unexpected twist. What does Jimon do when about to be discovered in the girls’ locker room? Put on his evil minion suit, or course! It also helps that both Zvezda and White Light are organizations that not only screw up a lot but often succeed as well. I’m constantly kept off-balance by what they might try to do next, like in this episode, Jimon just happening to lead White Robin into a trap (okay, questionable plotting, but in this series they can get away with it). And, I suppose, the show’s oddness, that little girl running such an organization, hasn’t grown stale on me yet.