Nobunagun 8 has Sio and her guys joining up with another bunch of guys to fight what they’re calling a battleship, though it looks like a giant octopus to me. No wait, only two tentacles, so would that be a bipus? Whatever it is, the first platoon has to take out one tentacle, our guys the other one. Good thing too, since the two platoons don’t get along at all, as they make clear early in the episode, the middle of the episode, and up to the end. But they’re (almost) united by their mutual, growing hate for Vidocq, who orders sweet little Galileo to take in key information until it nearly kills her from the feedback, then says he’s too busy to visit her in sickbay. The poor thing’s got a crush on him, too. I frankly don’t care too much about that; the show’s at its strongest when Sio channels Oda and gets that evil grin on her face, and while that doesn’t quite happen, she has a moment of battle insight that saves just about everyone, including that old lady who runs things and came out to take direct command for no reason I can see except she needed to be put in danger for the plot. As for Sio, her heroic moment now has her sinking, unconscious, in the water, and nobody seems to have noticed. I’m beginning to have my doubts about this organization. 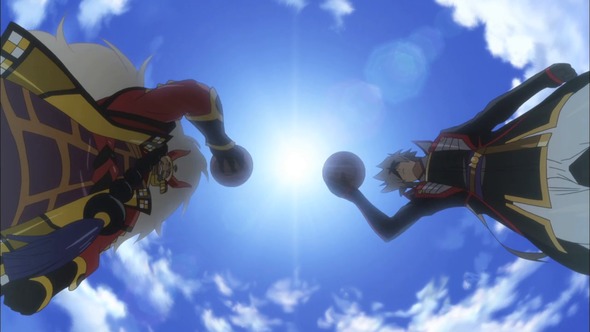 I would talk about the great intrigue found in our other Nobunaga show this season, Nobunaga the Fool, but it’s pretty straightforward and naive. We have Mitsu doing nefarious things like killing Nobunaga’s brother while still devoutly obeying the fool himself, in fact, the murder was out of loyalty. On the other side we have Caesar supposedly working with the Takeda clan while actually planning his own conquest of the land, or maybe just Ichihime. Both of them are fooling a lot of people, but it’s just a single level of deception. There are no wheels within wheels going on here. As for the actual story this week, we get a lot of mourning for Nobukatsu, though it looks like Ichihime will pull through. I liked her better anyway. I was surprised that the big fight (okay, the second) between Nobunaga and Shingen had such a decisive ending. Still, it was fun. They even had some time during locked-sword time to talk (“Sorry about your dad.” “Shit happens.”). I enjoyed Shingen’s honest bloodlust and sense of honor, so it’s a drag to see him go and die and have that smirking Caesar take over. 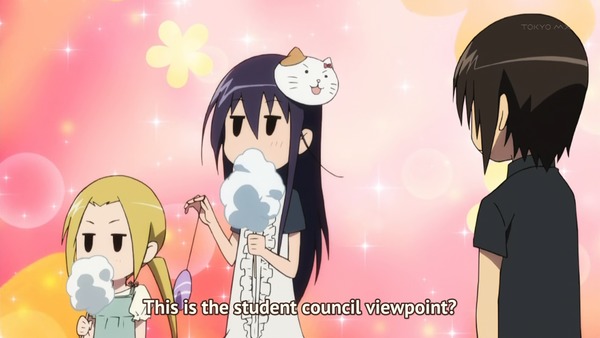 Seitokai Yakuindomo Huh 8 starts with all the events of summer you’ll ever find in anime apart from the ghost stories. The SC is off scouting beach locations for the school trip, but it seems like more of an excuse to have a beach episode to me. Shocking. Anyway, Takatoshi takes a group photo, we have our weekly rule announcement, more beach activities, then night falls, so there’s test of courage (scouting) and the inevitable local festival with fireworks. When they get back home they do their summer homework together, except for the bored Suzu, and Kotomi, who ran away. Shino tells the dozing Takatoshi that she’ll be giving him morning calls from now on, and believe it or not, the punchline is not dirty. Then the latest of the riveting drama corner “Takatoshi and Dried Squid: Max Power!” And finally, it’s too hot to sleep so Shino calls her friends. Oh, and Takatoshi has a photoshopped photo of Takatoshi that’s making the rounds. It felt tamer than the usual episode, or I’m not getting the jokes.