After watching Kill la Kill 20, I give up on trying to predict what the show will do next.

It’s too much to say that they turned everything 180 and now we have to root for the villain to defeat the hero. Ryuuko’s simply brainwashed and needs someone to talk or knock some sense into her. But if we had seen the screenshot above a dozen episodes ago we wouldn’t have believed it, or we’d have invented some other story line. But now I’m already breaking my vow. Maybe Ryuuko won’t get her senses back during this fight. Maybe she’ll win, and that ship will sink with everyone on it, and someone else will have to betray Ragyo, maybe Nui. … Nah.

Besides, thinking about it, I don’t know if she CAN win. True, even without Junketsu, Ryuuko was able to slice building up, but she’s not herself. A couple of episodes ago she was able to tear life fibers out of her brain! This episode, she gave up pretty easily. Also, I remember Satsuki having difficulties controlling Junketsu, and though it didn’t matter at the time, I suspect now that they inserted those bits as foreshadowing. On the other hand, if Ryuuko is a life-fiber monster she shouldn’t have such a hard time. On the other other hand, Satsuki is wearing Senketsu with the clothing’s permission. While she had struggled to dominate Junketsu, she asked Senketsu for his help. They’ll do their best to cooperate.

So place your bets, if you dare. What will happen next week? Will Satsuki get through to Ryuuko? Will Senketsu? Maybe Senketsu will get through to Junketsu instead! Will Mako succeed where she failed this week? Will the four Devas be able to assist? Will Nudist beach manage to do anything useful at all? Don’t ask me. I just don’t know anymore. 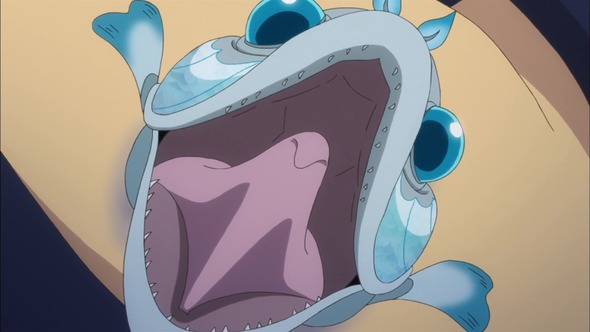 For Nagi no Asukara, I suppose it’s not fair to complain because the story arc might give a little hiccup and move forward once an episode, because at this point I can’t figure out what the actual story is. As for the characters, they can’t take care of the mysteries of this cooling period, or waking up the people underwater, because they don’t know enough. Besides, they’re all trying to get their personal lives sorted out. On that side, Manaka’s awake and delighted by … well, I was going to say everything, but she seems fixated on the salt-snow at the moment. Everyone’s happy that she’s happy, except Miuna, who thinks she might be happy about it but feels guilty because maybe she doesn’t. At any rate, she’s been shoved aside in the Hikari sweepstakes. The others go on the way they always do, especially Chisaki, who, Manaka implies, hasn’t changed at all. I can’t remember now, but does she WANT to change? And so another episode slides smoothly past, until the surprise fish at the end, suggesting that asshole god is around, hopefully to speed up the plot. 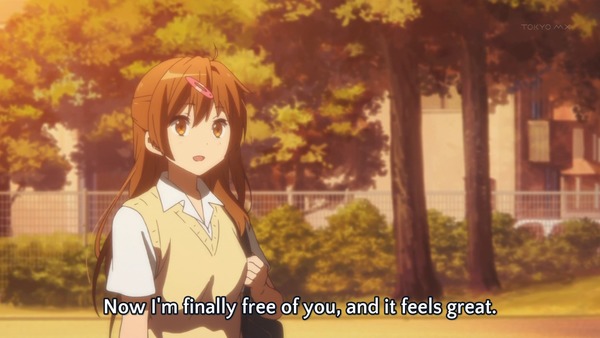 Since the important story of Chuunibyou was taken care of in the first season, a lot of us worried or wondered if Ren would have a backbone strong enough to hold up new stories, and while watching the Yuuta/Rikka romance slowly blossom has been cute, the new season has been less compelling to watch. But episode 8 manages to find something interesting. A fake Mori Summer appears and has bamboozled Sanae away from Shinka. My first reaction was “So what’s the problem?” and indeed, Shinka was, at first, relieved. I liked this reaction. She had tried to put Mori Summer behind her, and this reaction showed that she had succeeded. 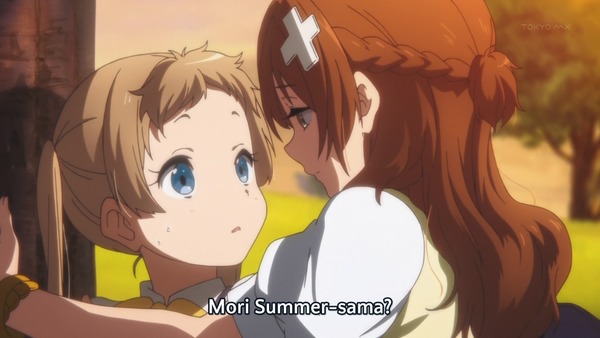 But this would ignore the fake Mori and her interest in Sanae. She comes off as creepy in her first scene, and when we (and Shinka, Yuuta, et al.) get in our heads that she’s interested in more than Sanae’s pure spirit, or purity for that matter, the episode becomes less comic. After all, she’s a deluded, love-struck stalker. But it manages to remain light, since in order to battle her Shinka must remember Mori Summer stuff she’d rather forget. The big imaginative battle at the end stretched my incredulity somewhat, I mean, with the others cheering her on, it’s almost as if that big light show was actually happening, but the show hits just the right note when Shinka gives her big speech at the end, with that heavenly music playing. It’s one of the best moments of the season, and it made Sanae come somewhat to her senses. I do feel a little sorry for the fake Mori Summer, however, while at the same time I worry that she won’t let go and Sanae will have a stalker to deal with. Nah, not that kind of show.