M3 3 is a decent but not great rebound from the previous week’s mess.

There’s still plenty here that doesn’t make sense, and by that I mean the way the people are dealing with the “corpses” and the administrators are training the team, which is becoming one of the most dysfunctional I can think of. Nobody in this group can see eye to eye, except maybe Akashi and that other guy, because they’re both guys. Meanwhile, administration is leaving the training up to themselves, so naturally no one improves. Akashi is tossed into the Reaper, sorry, Argent where he keeps nearly losing his mind, not to mention his lunch. This all actually makes things easier for us. Instead of infodumps or technobabble we focus more on the characters.

They introduce a new girl who’s as mousy as Mahmu, but less weird and therefore less interesting, but more important to the plot because she keeps showing up in those visions and is the girl Akashi saw that day. We get a monster at the end, who was once a little girl, whom they dispatch and feel sad about. If they’re so sad about it, why don’t they come up with a better way to deal with them? Put that girl front and center, have her cry and sing, then kill the thing while it’s distracted. That’s it! Still, better than last week.

On to a show that’s even less cheerful than M3. Selector Infected WIXOSS 6 mainly has all the girls wallowing in their own pockets of misery, and there’s a nice battle thrown in for good measure. I was a little surprised that Ruuko was able to defeat Akira so easily. Basically, she was stronger than Akira expected or wanted, and Akira was further thrown when she found Ruuko had no wish. Finally, Ruuko and her cute little avatar were more determined and just as bloodthirsty, in this battle, anyway. Remember, her fight with Hitoe was so polite you expected Tama and Midoriko to shake hands after each crash. I suspect her fury over what happened to Hitoe might have fueled her a bit. 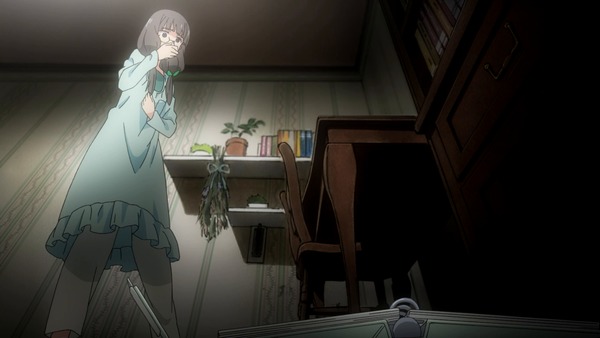 But of course, afterwards Ruuko feels nothing more than raging guilt. Akira and her post-battle spite-speech certainly helped, Ruuko shouldn’t take her words personally. But it’s a problem worth addressing. She enjoys the battling, not a bad thing, but the fact that she’s doing so without a wish to fight for suggests that she’s becoming monstrous. She’s fighting for the sake of fighting. The fact that she’s aware of this makes this something to keep an eye on. Elsewhere, Hitoe begins the rest of her completely miserable life. Her mother even reaches out to Ruuko, who can’t gather the words to tell her, and who would believe her? It’s harder to feel for Yuzuki, her wish is so wrongheaded for both her and Kazuki, but when she starts talking about not wanting to go on, you have to take her seriously. When she finally loses her third match, I don’t want to watch what happens. Yeah, everyone’s pretty miserable this week.

As I sort of hoped, Knights of Sidonia 5 is about as low-key as you can get. Nagate finds Shizuko and now they’re adrift in space with no hope for rescue. What would you do with two kids marooned in space? Alas, both are too shy for that, but Shizuka does strip out of her suit to sunbathe (for photosynthesis! Really!), giving this series an unexpected fanservice scene and making me wonder why, if she’s that gender-neutral sex, why she looks like a girl. Other than that they talk, or rather, Shizuko talks only to discover that Nagate’s fallen asleep on her. Back on Sidonia, Kobayashi is saying “no” to rescue to anyone that asks and dolloping backstory as she does, and we have a classroom scene for the same reason. But why was it so hard for our lost possible-lovebirds to get rescued. Last week they had reached a point of no return, yet here the rescue seems to be no trouble at all.