Nisekoi ends, rather early in the season, too. That’s okay, I guess. It’s not like they’re going to get anything solved, anyway. And we get the Romeo and Juliet that the series deserves.

One way to get through a high school series is seeing how well they do the seemingly obligatory rituals, and the school festival is one of the most ubiquitous. Doing a play, however, is somewhat more rare. The best school play scene that I’ve come across in anime is Toradora’s wrasslin’ showdown, but Nisekoi’s mess of a Romeo and Juliet ranks right up there. I had expected lots of comic moments involving Chitoge not knowing her lines, but I hadn’t expected Shu to mess with things from the booth, or Claude and Marika’s interference. The only reason for it, of course, is to give these characters (and Tsugumi) one last bask in the limelight before we got back to what passes for plot in this series. And it’s great fun. I especially liked Chitoge/Juliet on her balcony, watching as the set and the play falls to pieces with various looks of disbelief on her face. 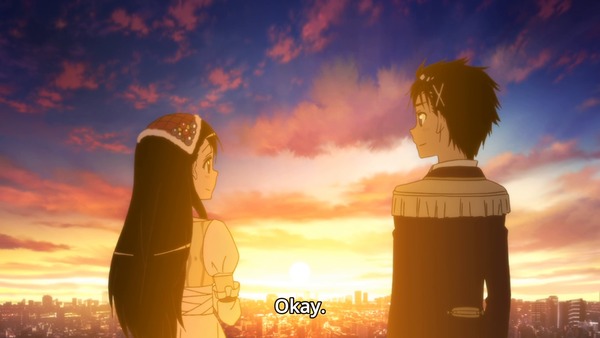 Of course, they have to get back to that lack of story. The, er, lovebirds make up afterwards. Chitoge realizes she might actually love Raku, while cheerfully telling him she hates him. It’s become a sort code for her. Meanwhile, Raku, more confused about things, accepts her apology and is glad for now to have things back to normal, i.e., pretending to date a girl that drives him crazy to keep his Yakuza family and her mobster family from starting a gang war. Then he does maybe the nicest thing he’s done all series, for Onodera, recreating the balcony scene with her, both of them in costume, so she can get a little bit of that wish that she had. Not much else has gone right for that poor girl, so it’s nice that someone in the show gives her a break, and that the gods of comedy would stay out of the way for a few minutes. 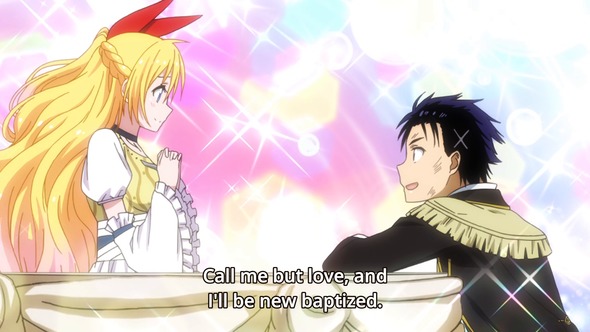 As for the show itself, you know it as much as I do: nothing much happened. Most of the time, whenever someone was going to do something audacious like move the story forward, those gods of comedy stepped in and either stopped them or skewered it so that something completely different happened. This can be funny, and often was. But it gets tiresome after a while. The other problem I had was that I didn’t like the Raku and Chitoge pairing. I was rooting for Onodera. But that would mean violencein the streets. However, the show seemed to think the same way. Maybe that’s why it dithered so much. They creators must be looking for another outcome! Yeah! Well, whatever the reason, it was always fun to look at. Shaft used their usual visual tricks to make it look like something greater was happening than what actually was, and they’ve always known how to deliver a gag. They took what was good about the source material and embellished in their own way, and I usually laughed.

Mahouka is FINALLY done with its first story arc and now …

It … doesn’t exactly leap into the second, a big athletic contest between nine schools. Be fair–it’s normal for a show to want to set up its pieces before plunging ahead into story. So this week we get introduced to a new guy, who’s pretty quickly forgotten. Then there’s a question of who’s going to be the engineers on the team, I guess they calibrate people, or the stuff they carry. All of the girls want Tatsuya to handle it, in case it means he gets to calibrate them, if you know what I mean, so he’s got to undergo a test to prove he can do it. Being the uber-competent alpha male hero character he is, he passes with flying colors. The only surprise is that Hattori supports his admission. Other than that, we see magic helping you fly (very complicated, and the show went into too much detail), we learn that Tatsuya is a special agent of sorts, no surprise there, and we don’t see the rivals we saw last week at all. And the same lifeless dialogue and plotting, and a totally dull hero, that we get every week. 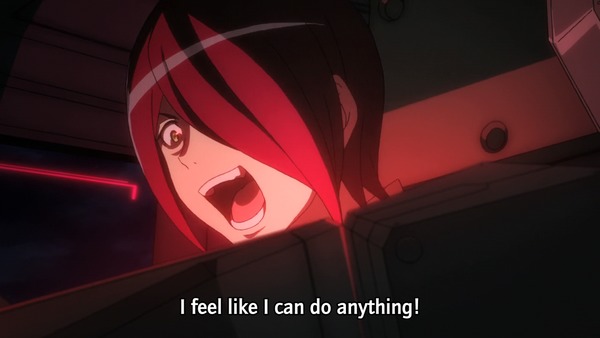 On Captain Earth we had a story arc conclusion at episode 7, when I didn’t even know there was one going. So far it’s all been introducing a few people, taking out a spy or two, and the kids going up to kick the enemies’ butts. But Teppei had something he had to undergo, I guess. So with episode 8 the bad guys start to try and wake up the remaining Designers Children, starting with Zin, mild-mannered roulette-spinner who never gets what he wants. Both sides go to find him, and the bad guys get to him first. Zin becomes Zimbalt, and insane, and we get another battle. Afterwards everyone says the mission was a success. But how? The bad guys get their buddy back and escape successfully. I don’t call that success. Or maybe Zimbalt is such a nutcase that he’s going to be a burden for the bad guys. Maybe. There’s a lot in this show I don’t understand.

Kanojo ga Flag o Oraretara 8 lurches from one situation to another. First, he’s at the dorm over the break, happily doing nothing except making Rin jealous, when Ruri shows up and flies him off to Akane’s mansion. All the girls except Nanami show up there and we have a boy-in-the-girl’s-onsen scene with even less of a point to it than the one Nisekoi had. At least Nisekoi’s had some decent fanservice. Meanwhile, now Nanami’s jealous, so they all traipse off to her country and board the royal train. I start to think it’s just a filler episode all the way, and a dull one at that, but then Souta gets ANOTHER girl for his harem, Nanami’s sister, Hakua Beserker Bladefield. That name gave me the biggest laugh of the episode. There’s some dull talk, then an assassin of the same model as Ruri shows up and tries to kill, er, it’s never made clear, but a death flag pops up and then goes away and Souta looks satisfied. More satisfied than I am by this episode.