A good start to Aldnoah Zero.

We meet Princess Asseylum, a young, innocent thing representing the Vers Empire, who has a lot of ancient technology that could easily take over the earth, but she’s on a goodwill mission to keep that sort of thing from happening. Then we switch to a more normal domestic scene and meet Nao and Yuki, follow Nao to his dull school life (He’s pretty dull, too), while Yuki goes off to military training, led by a drunken guy who’s very cynical about earth’s chances in the future, then back to Asseylum’s ship where a jerk named Count Cruhteo listens to another count, one of 37 clans, speculate about what would happen if the humans prove treacherous and kill off the princess and how that would be a perfect excuse to invade, right?

So, though I suspect Asseylum’s not really dead, it looks really bad for Earth. The invasion starts and if we believe the drunken Marito, there’s little anyone can do. As for me, I’m wondering how the hell they’re going to work all these characters and backstories in. Yuki’s in the military, so fine, but brother Nao’s just a schoolkid. Slaine, Asseylum’s human tutor, is just that, basically a whipping boy, but we spend too much time with them to think they’re not important to the story. Well, I suspect the show will think of something. They do a good job of bombarding us with character introductions and backstory without making it TOO confusing, though having two different conversations at once, as they liked to do, doesn’t help make things clearer. The overall tone is big, grand, and dark, and it’s confidently handled. If the story fails, I don’t think it will happen through bad storytelling. I’m keeping this.

Also a good start for Barakamon, but like Aldnoah there are potholes the show must avoid. What we have is a calligrapher named Handa who is told by the guy who runs the pavilion that his entry at a competition is too much in a “copybook style,” and manages a line about mediocrity before Handa punches him, thus getting himself “exiled” to an island where he will experience the bucolic life, get his head straightened out, and meet “the village scamp” Naru, who tells him his letter look just like those in her copybook. 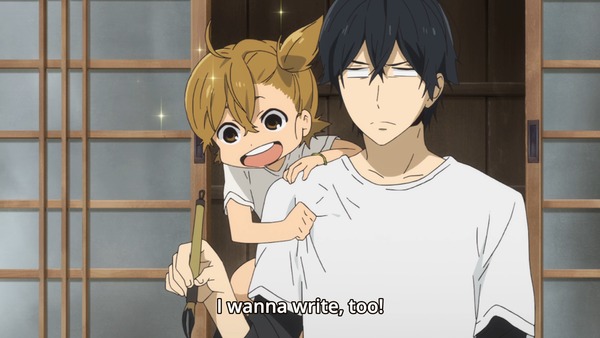 Often when we visit the countryside, whether it be in anime or any other format, the locals are all deliberately, painstakingly eccentric and colorful. And they tend to be wiser than anyone else. There’s that danger here. Naru has a grandfather who is already riffing on Handa’s closed heart metaphor. But fortunately the rest of them seem normal enough. There’s also the danger of getting overly heartwarming and that happens at the end when the villagers all come to help him unpack, but the stick enough humor in it to make it palatable. Kudos to the show: Naru, who’s in Handa’s hair from the moment she meets him, is not annoying as hell, or wise beyond her years. Instead she livens up every scene she’s in by being a kid. This might be a great show if they keep avoiding the potholes.

I don’t know if I’ll keep Sabagebu!, but it too has a promising first episode. We meet transfer student Momoka as she is groped on a bus and rescued by a scary and beautiful young woman, then does the usual first day at new school things, sees the scary girl and follows her out of curiosity, gets kidnapped by the survival club and later forced (drugged) to join. Normally I’d be pissed off at such behavior on the girl’s behalf, but you can see early on that she’s intrigued, by the scary girl (Miou) if nothing else. She also encounters some bullying and gets Miou’s possibly unwanted help. She has her first battle and does well, being a natural shooter, and so a new “chosen one” is found!

Sounds terrible, but it’s not. It works with a lot of gags, and it’s fully aware of what we’re thinking. We have a narrator who comments on the action and points out the clichés. My favorite bit was his reassurances that this wouldn’t be THAT kind of show when the bullying scenes begin. Momoka looks like your average main character, i.e., straight man, but she has a temper, can be petty, is swayed by authority, and is generally tired of the nice-girl act she has to put on every time her family transfers. Miou can be a lot of fun too, because she is not only beautiful but a little vain; she likes to look beautiful while wielding a gun. Too soon to tell about the other girls in the club. I wish they hadn’t revealed who that monster was so soon. I like of liked it sneaking around. Three good starts a row!

The streak is broken for Space Dandy 2, not only because it’s not a start but a second season, but because it wasn’t one of the better episodes. In it, after trying to register the cow above as an alien and getting a lecture from that lady, they speculate about other jobs, pull a thread, and proceed to visit alternate universes with their own Dandys, Meows, and QTs in them. Some of the Dandys try to shoot or capture them, while others are caricatures of famous shows or characters. Soon, the cosmic string unravel even more and things generally go to hell.

And it doesn’t really work. I couldn’t get the rise I should have out of the giant Dandy or the Dragonball Dandy. None of them were that clever or imaginative. I started to wish that they’d get past that bit and work out the solution, and when they did it wasn’t very interesting, either. If they were trying to blow our minds with the cosmic potential of alternate realities, well, that failed too. Well, with this show you can chalk up the failures to the creative team they have on hand this week. Next week they might do better, and this show can do better than this.

Akame ga Kill … I’d say it was a good start but I’m having a hard time with the mixed signals in episode one. We start with good-hearted country boy Tatsumi going to the big city to make his fortune, or save his village’s fortune, defeating an absurd monster along the way. I knew this would be a “dark” show, so I figured the first thing that’ll happen to him in the city is he’d get swindled, in fact, I jumped ahead a minute or two to save myself time. I didn’t expect the nice rich girl to pick him up and take him to her mansion … in fact, it looked like the show would get even more insipid. Then the fun happened.

When I said “mixed signals” above, I didn’t mean the show was confusing its presentation in anyway, I just wasn’t expecting the juxtaposition between the cartoonish aspects we’d seen with the twisted things that happen next. With hindsight the two mixed pretty well, and as much as I don’t want a childish show, one that’s always dark and heavy can be just as unimaginative and shallow. Also, the world they’re setting up looks interesting. We’re led to believe that the kingdom is rotten to the core, but the capital streets are bright with sunshine and full of people happily going about their business, probably with a hand on their wallets, but still … And we’ll have to explore the morality of the “assassins” as well. Take that one guard who tells Tatsumi about all the corruption. Would the assassins have killed him too (maybe they did) even though he is a potential ally? Is everyone with money in the show corrupt and evil? I hope not. That would be simplistic. So an interesting start. A terrible first half to set us up for a shocking second half.