Aldnoah Zero 7 was great fun, though there were some nutty coincidences and a bewildering exchange between Inaho and Slaine near the end whereupon Inaho shoots down Slaine’s ship, well, Slaine was shooting too … Not sure where they’re going with that. Looking at it through Inaho’s eyes, this guy has just helped him kill off Femieanne and her ridiculous weapons. The enemy of my enemy and all that. But now he wants to meet the princess, so Inaho thinks he has some ulterior motive. I suppose he’s balancing one guess and another. As for Slaine, why did he fire at Inaho? Did he think that Inaho would try to keep him from the princess? No idea.

Well, it’s a good way to end a good episode. We saw Inaho use his guile to keep Femieanne at bay, well, Slaine certainly helped. Hell, even Yuki back on the ground was of use. Femieanne was a fun homicidal villain, even giving those fist projectiles names and mourning them when Inaho/Slaine et al picked them off one by one. And she met an appropriate fiery mad villain death. So I’ll forgive the show the incredible dual coincidences of discovering a hidden dock, finding an aldnoah fighter inside, and even (“Oh my god what’s that??”) a fully operational battleship, which Asseylum duly boards and commands. Absolutely ridiculous, but, you see, when you make the rest of the episode entertaining you can get away with it. Instead of “I don’t believe it. What a stupid plot device,” it becomes “I don’t believe it. HELL YES!!” Other shows, take note.

I seem to have skipped Barakamon 6. No matter. I don’t think whatever those visitors had to say it was very important. Big stuff in this show goes by in passing, anyway. More important this episode is the fishing. We learn hot to catch horse mackerel, and they actually catch some. Handa seems to be at peace with the visitors, even the little prodigy, and a good time is had by all, including me, even if they don’t quite catch the big one. The half-hour moved faster than just about any other episode of any show this season.

It seems that every time I turn around there’s another Free! episode out, so here’s another two-fer for you. Episode 7 took care of the relay competition in efficient fashion, almost too quickly, meaning there will be another direct confrontation between the schools later on. Everyone’s up for it, though they start dropping hints about future problems, small ones, like Makoto’s slow starts (and his search for an answer kicks off the plot of episode 8), but especially, what’s up with Sousuke and Haruka. In episode 7 Rin confronts Sousuke about his attitude, and the accusations become more abstract as the confrontations become more physical. Sousuke was looking for an answer when he did the relay, but didn’t find it, and is angry, and so is Rin because he didn’t find an answer, leading to Sousuke saying he’s angry he doesn’t have an answer either, while their grabbing each other’s collars and slamming each other into trees. I didn’t know athletes could get so philosophically pointless. 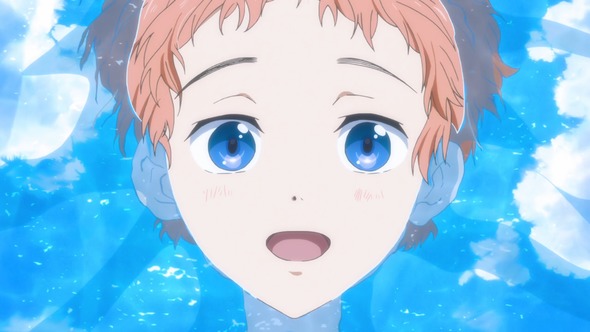 Still, it was more interesting than episode 8, where Makoto volunteers to coach swimming. He loves it (seriously, he’d be an excellent swim coach, if he could learn to get stern with people), and of course there’s the one boy who is afraid of swimming because of a boating incident, and how to reach him. That part would be routine apart from how he manages the miracle cure. He has the boy swim on his back, so he can see the sky, or ceiling, and it was a moment that saved the episode: along with the usual “don’t be afraid” lines, he give the kid a revelation, a moment of joy. Good work! Apart from that both episodes have the question of what Haruka will do next, which would get almost as philosophically pointless as Sousuke’s issues (though it turns out Sousuke’s issues are more physical than he lets on) if he wasn’t so laconic. But it looks like we’ll get a full blast of it next week, if I remember to watch.

In Akame ga Kill 7, the way they’ve framed the upcoming battle between Bulat and General Liver, it looks like Bulat’s going to get it next episode. The question is whether he can inflict enough damage to Liver first. The fact that he was once Liver’s subordinate isn’t going to help his chances, and I don’t want him stumbling around in confusion during the battle, though that will certainly happen. As for Tatsumi, I don’t expect him to die, so let’s see how strong he can be against Nyau. It was funny to hear that third guy mouthing Tatsumi’s lines about getting stronger; for a moment I thought his imperial arms involved telepathy. But what’s the deal with sneaking aboard that ship? Tatsumi, Bulat’s invisibility doesn’t mean much if you’re chatting away with him on a crowded deck. Elsewhere, the show introduces us to two new characters and immediately slaughters them. Just a reminded not to get too attached to anyone in this series.