Death Parade brings us a young newlywed couple who find themselves in a mysterious bar, where Decim, the bartender, tells them that they can’t leave until they play a game, betting their lives. Turns out to be darts, only the board will cause pain somewhere in the opponent’s body depending on where its hit. As the two play, secrets come out and it’s clear that the two would quickly be heading for divorce court if they weren’t already dead. The game was in fact a way to reveal or decide … something.

I’ll watch episode two, but the first one left a bad taste. I suppose the game is a way to tear away the illusion that they were a happy couple. In fact, it’s an act of cruelty, and an opportunity for us at home to pass moral judgments on the victims. In the end we learn that the game winner will go off to “the void” while the loser will be reincarnated, and if you say that well, she deserves it, I wasn’t crazy about his behavior during the game, either. In fact, I think their fates had already been decided, meaning the game it self was a way to inflict a little pain on two people who were already going through plenty. But at the end we get a peek of two other characters, and a hint that this series might turn away from “victim of the week,” so I’ll keep watching for now.

Durarara x2 brings back the gang, or gangs, after five years, though it’s only been six months for the characters. Little has changed, or at least that’s what Mikado thinks, and indeed we don’t see much out of the ordinary, just the little plot bits being scattered about. We start with Celty on the run from that motorcycle cop–live on TV, which gives us a reintroduction to many of the characters, because they’re all watching, though they really wanted to watch a documentary on Yuuhei Hanejima, Shizuo’s younger brother, so we get a glimpse of him as well. There’s also a string of grisly murders that has made the TV, which Kyohei and the guys in the van are watching. Which is all mixed in with flashbacks of six months ago.

And so the wild ride starts again. Hard to tell, as usual, where they’re going with this, but apparently Celty’s figurative head is up for grabs with a 10,000,000 yen bounty, and her literal head is not seen this episode. Then there are the murders, and Yuuhei, and Izaya-kun’s up to something again. And new characters to mix in. We get a glimpse of just about everyone, though not enough of Simon. Seeing all the characters made me smile, but we’ll see if this new series can live up the the classic first.

The first season of Aldnoah.Zero had a pretty crazy ending, with Slaine shooting just about everybody around out of some weird jealousy or misplaced loyalty. It looks like the creators didn’t really like the ending too much, since most of the characters that made the show fun were now dead, apart from Slaine. “What the hell, bring ’em back! And let’s mess with the fans while we’re at it!” So when the story starts, Slaine is apparently a knight of the Vers empire, so a bad guy, and Asseylum is the same, though in a vat in Slaine’s quarters, and there’s another princess back there, muttering about her bloodline. Saazbaum is alive. Oh, we get some backstory to explain it, but it’s still pretty crazy. In the episode, things look dire for the good guys until Inaho (he’s alive too!) shows up and knocks out another generic Vers baddie using only his guile, just like the old days.

Like in the first series, the big question is “what is going through Slaine’s mind?” He appears to be a loyal Vers knight now, but since Asseylum’s still there perhaps his loyalties still lie with her. So why did he help Saazbaum escape? Was there no way to rescue the princess? Also, I’m confused about what it was that gave Inaho the aldnoah ability to rescue his team. The blood? The kiss? I wonder if we’re going to get any answers until Asseylum wakes up, which could take a while. It’s an effective episode, getting us back in the war and keeping us guessing at the same time.

Let’s see, Rolling Girls starts with some background on how all the prefectures are now independent, because reasons, and now each prefecture has little squabbles with other prefectures, usually resulting in a fight between super-powered “bests,” while the others “rests” try to mitigate the damage. We watch one best, the maccha-green Masami, go at it with another girl, meanwhile her younger sister, Nozomi, wants to join the gang, to the dismay of Masami and family. Then there’s a fake robot, a ramen eating contest, and in the end Maccha’s group are stuck on a deadly roller-coaster, which even the enemy thinks is a little extreme. Oh, and a girl on a scooter keeps showing up. 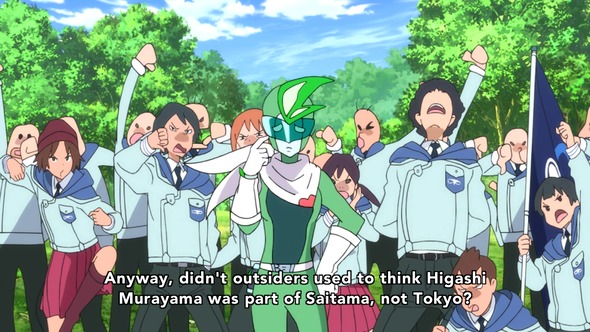 It’s next to impossible to understand what is going on, especially if you’re like me and don’t understand the intricacies and history of the various prefectures, which is what fuels much of the plot. I don’t mind too much. While the two bests are indeed beating the crap out of each other, the rest of it is bright, colorful, and eccentric. The clever, offhand way it introduces everyone reminds me of a better-than-average noitaminA series, something like Tsuritama. It’s nice to look at and has a fun ED. For me, it’s worth keeping an eye on to see if I can figure out what’s going on.