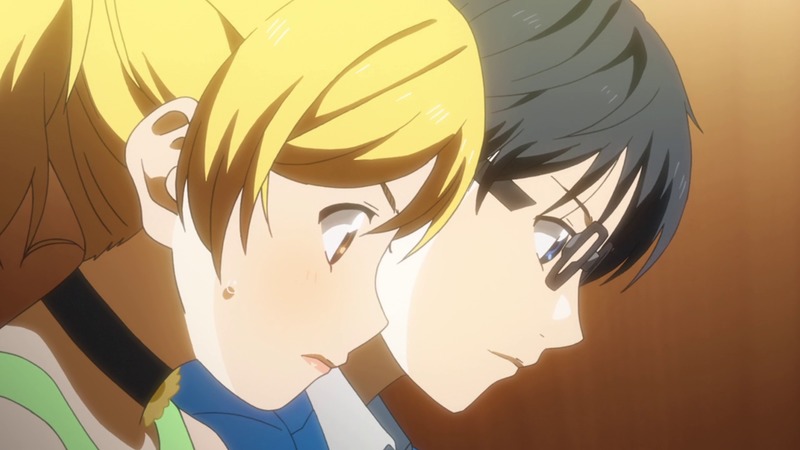 A lovely episode of Your Lie in April this week, mostly positive, with no major crises in Kousei and Nagi’s duo.

The main point of the performance was to show us how much Nagi has grown, how much more she can do now. Even while Kousei isn’t playing exactly the way they practiced she is rattle for just a second and adapts, using her natural abilities and her damn cussedness to keep up, and to take control when it’s right for her. It was a rewarding moment for us, well-executed as usual, to watch her, but I was just as interested in what Kousei was doing. He “could hear the notes,” which in the old days would have been fine, but he, too, has matured, and what he once thought was the norm is no longer good enough, so he works harder, bringing us to Nagi’s triumphant adapting.

As Hiroko points out, they’re playing a waltz, so this back-and-forth between the performers makes perfect sense. One other idea is tossed out there; Nagi has been chasing her older brother’s back for years, and now Kousei talks about seeing Kaori’s back more often, as he struggles to keep up. The episode ends with a sweet scene between Kaori and Kousei. Kousei, through that performance, is telling her to dream again. But I wonder, as Kaori does for a minute, how performing beautifully can help a person who can’t play at the moment and may never be able to again. Well, it shows he was thinking of her.

In Saekano 6, Tomoya and Utaha spend the night in a hotel. The gag is, of course, that they didn’t do anything naughty, but the show has a lot of fun teasing us with the potential. It all happened because Tomoya, after ditching poor Megumi (but turns out Eriri picked up the slack and gave Megumi some screen time to pout cutely), ran around until he found Utaha finishing up with her manager and heading for her hotel room. The last train already left, there are twin beads, so …

When the episode wasn’t flirting with us, it was reestablishing the trust between the two of them, something that had been fractured for Utaha awhile back when Tomoya had refused to look at her latest book manuscript. Authors often have reading circles, so I think it would have been all right, but Tomoya had wanted to keep the distance between creator and fan, and I can understand that. But now the boy’s a co-creator of a sort, so the episode uses the metaphor of an illicit night to have the two creators collaborate on their project, and for Tomoya to insist that we can’t dwell solely on the past.