You know, after Shirobako 22 aired last week, it occurred to me that if they’re going to redo the last episode of Third Aerial Girls Squad, that means re-recording, and that might mean Shizuka might be called in. The girls’ dream was to all work together on a professional production, right?

I am so glad to be right.

That was the crowning moment of maybe the best episode of Shirobako, the season’s best series. We still have an episode to go, but I expect that will be mad scrambling and success, or at least not complete failure. This is too optimistic a show to have them fail now. In fact, the episode draws a lot of parallels between Musashino and the show they’re animating. They’re told that the original artist, Nogame, has rejected the happy ending, that the Aria character will not fly again. Such a downer ending bothers Seiichi partly because of the hassle of redoing everything, but mostly because it goes against his instincts as a director. But what can he do? Nogame, god, has spoken. Or his asshole editor did.

Seiichi long ago became one of my favorite characters in the series, and in this episode he reminds me why. His entrance into the publisher building is ridiculously dramatic. And it gets better when he actually meets Nogame. Now it’s two creative wills, both with solid points on their side (Seiichi, working with a team, sees the story in that view, while Nogame’s interpretation is more personal) until Seiichi suggests something that takes Nogame aback, and then it’s two creative minds working together, feeding ideas to each other, coming to an agreement that makes both sides happy. As for that editor, well, all I can say is about time. Funny story. 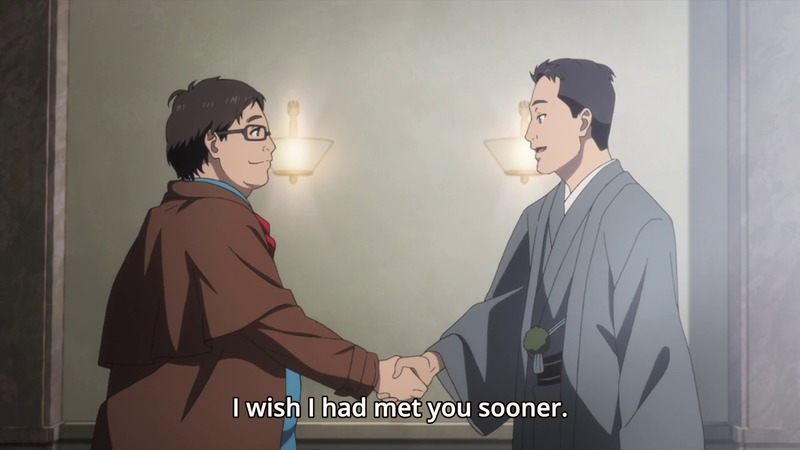 So now all of the crises and themes are settled except one: they have to actually get that final episode finished, which I’m sure will take up all of the final episode except for the necessary scene of the girls celebrating. I don’t think it will have the punch that this episode does, but I can’t wait for it anyway.

Kantai Collection 11 begins the mission to destroy the enemy’s main fleet (I think), and since it isn’t a one-episode battle, things look bleak at the end with a bomb heading straight for the defenseless Akagi. The show has added some extra undertones to the ones the WWII setting already provides by having Akagi have a series of nightmares about the mission going very badly. And there’s the question of fate. Has she already experienced this tragic situation before, in another life? If so, can she alter her fate? Since I hate in fiction the concept of history repeating itself, its characters doomed no matter what, I’m on Akagi’s side. Either way, it’s a darker thing to think about than I was expecting from this episode. Even the lighthearted scenes had a weight on them.

Saekano 10 finally introduces the project’s composer, Michiru, whom we haven’t seen since episode one. Turns out she’s Tomoya’s cousin, born the same day and in the same hospital, a bit of dating sim coincidence that naturally throws the other girls into a tizzy, well, except Megumi of course. Utaha’s author-imagination coupled with Eriri’s reactions made for an enjoyable scene, well, it was even before they learned about Michiru, with Utaha snarking at Eriri through the speakers after Eriri locked her in the sound booth. To increase the tizziness, she’s quite uninhibited and loves to tease. Naturally, the show takes full advantage of this and we get a lot of body ogling scenes. In fact, Utaha and Eriri seem to ogled more than usual, too. And so does Tomoya, believe it or not, after he hears Michiru play a song that’d be perfect for the game. Only Megumi is spared, and is fortunate enough to have to do nothing but toss out more funny asides.