Shirobako ended in triumph, Saekano ended with little fanfare.  Let’s see what Aldnoah Zero has in store for us.

Asseylum’s pronouncement doesn’t do much at all–everyone’s still out warring and having fun.  The only one who seemed to notice was Slaine, and his decision is to abandon the moonbase and blow up everything up, including himself.  I’m not sure why, especially after Lemrina said it was her home.  Also, it’s a boring way to end things, just stop the battle and everything.  There’s still two-thirds of the episode left!

Harklight decides that a suicide battle sounds like fun, and Slaine is reminded that Inaho’s still out there.  Of course!  Gotta have one last space duel with your arch-foe, right?  Harklight and the others can keep the Earth Forces side characters occupied!  Perfect!  Okay, the battles were a lot of fun, but often too fast to figure out what’s going on.  The worst of it is they’d switch from one to the other and our only clue was a flash of orange, or Harklight’s red.  As for Harklight, someone who had always admired Slaine’s moments of goodness and clarity, it’s a stupid way to go.  How’s Vers going to change if no one like him is around.  Oh, yeah, there’s the princess …

And a little more weirdness at the end.  Slaine is declared dead but isn’t (why?), Earth and Vers are at peace, with Assylum attending earth ceremonies with no one trying to kill her, meanwhile Inaho and Slaine play chess in some dungeon, and I think all the good guys lived.  Something of a miracle there.  But this was never the most realistic of shows and never pretended to be.  It wanted to be an epic war series with complex characters, and sometimes it succeeded.  Sometimes (most of the time) I would mutter “What the hell is Slaine thinking NOW?” but it made him fun to watch.  Inaho, when not saving the day all the time, was a crashing bore.  The other side characters on Earth just weren’t that interesting, and while the smirking villains of Vers were fun at times, they were mostly cannon fodder.  But what the hell, the battles were fun to watch, and the creators managed to keep the situation tense and unsettled until the end.  Fun.  Forgettable. 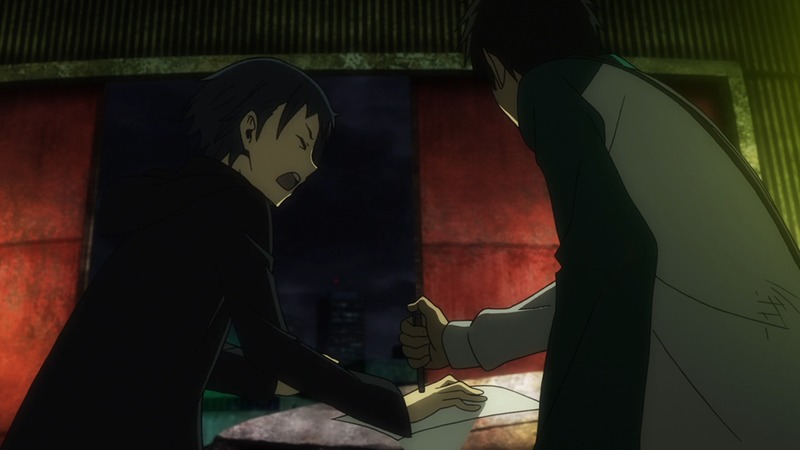 As for Durararax2, it sort of ends.  They decided to put season-long breaks between each story arc, it seems.  So this time there’s a lot of wrapping up and some setting up for next time.  Most surprising was Mikado’s stabbing of Aoba, not that he didn’t deserve it, and Mikado saying it was because Aoba got Anri involved is a good enough reason for the boy, but Mikado has never done anything as nasty and violent as this before.  And to slip suddenly back to his old “I have a bandaid!” self was even more disconcerting.  But since we haven’t seen this before, even after so many episodes, it feels as though the creators thought Mikado was too dull (they’re right) so gave him a psychotic side out of the blue to liven things up. 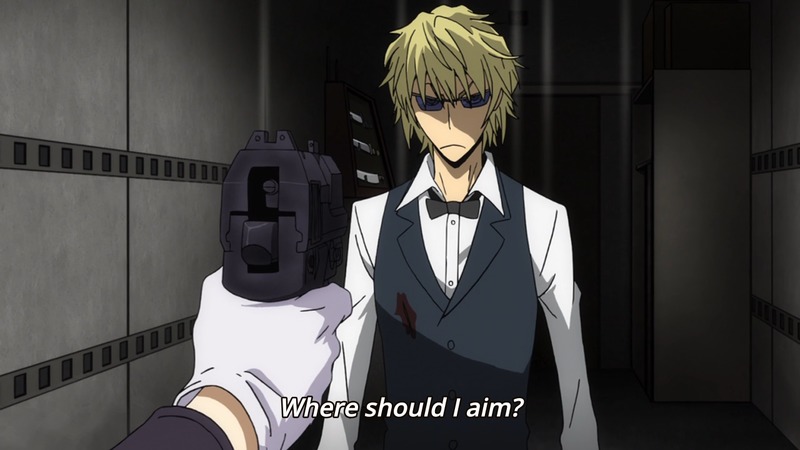 Yeah, this cours finale felt a little darker overall.  It’s still weird to see Simon participating in gang activity rather than as a general peacemaker and sushi prostelizer.  Izaya’s sudden stabbing at the end suggests that there are even more disruptive forces at work, and we’ll meet them next time, and Varona and her sidekick got taken out a little too easily, like everyone was just playing around with them until they got annoying.  The exception was Shizuo, who is obviously concentrating on his temper.  Trouble is, he feels a little tame now; it was a relief to have him get pissed off when Varona was stupid enough to attack him.  Well, most of the characters and relationships have changed since the season start, which is a good sign, and this series loves to keep us guessing, so this was a good way to end it for now.