Watching Danmachi episode 2 I wonder a couple of things.  First, where is the plot going?  We got Freya deciding she wants Bell, so she lets loose a giant killer ape to kill him, or Hestia, not sure which.  I thought she’d use, ahem, other means to get his attention.  Second, while I understand Hestia wanting Bell to get some good equipment so he will be stronger, it seems to me he was getting abnormally stronger anyway, maybe dangerously so.  So why the rush?  Third, why the hell hasn’t she given him that new knife now that the ape is trying to kill him?  Okay, she forgot about it.  I can understand that.  I’d forget things two if a fifteen-foot ape was chasing me.  The fourth question involves that ribbon, so I won’t post it here.

As for episode 3, I should have seen it coming.  Hestia would take FOREVER to give Bell the weapon.  She could have given it to him right there at the gate, but no, she has to run all over the place while the monster almost kills him, and then there’s a long speech, and repetitive (because of the Hephaestus flashbacks already told us that the knife was alive, etc) … Okay, if she actually had to bind him to the knife, or whatever she was doing with his back, I guess she couldn’t have done it with those iron bars in the way, but it doesn’t excuse the repetition.  At least when Bell finally gets the weapon he uses it and his abilities well.  And it’s the first time he’s looked determined the entire show.  I’ll suppose they’ll get to the Hestia collapsing business sooner or later, though next week we’re going to meet the girl with the enormous backpack.

The disappearance of Yuki Nagato doesn’t fill me with questions as Danmachi does, it teases me with overtones and raises expectations only to dash them with normality.  Episode two has the Christmas party, and backstory about how the school is going to shut down the literature club if Yuki doesn’t get five members.  She’s despondent until she meets a crazy girl, you-know-who, painting designs on the ground–to get Santa, not aliens (why she’s not after aliens I don’t know.  They didn’t have to change that), who inspires her to get proactive about new members, meaning she hands out leaflets, but she does not wear a bunny costume.  They have a Christmas party, but Kyon doesn’t wear a reindeer hat, nor does Mikuru stumble with the turkey.  Little things like that.  Just as well I get distracted by the references, since so far the story is pretty dull.  And no Kyon thoughts … 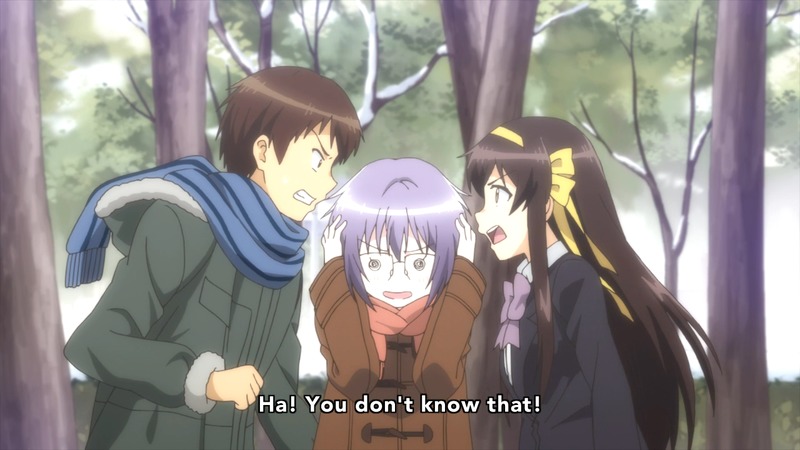 And with episode 3, the references continue.  Ponytails, not interested in ordinary humans, various weird things being brought to the clubroom, Yuki being asked if she was an alien, ponytails, stealing Mikuru for the club, and they even used some of the original soundtrack when the club room started getting crazy.  In terms of this series, however, we see Yuki being told again that she should be proud of her accomplishments, then have Haruhi not only steal the literature club from her, but also the episode.  Maybe it’s a good thing.  Yuki is certainly cute now, but also dull and passive.  On the other hand, Haruhi is a force of nature, and an obnoxious one if she’s not a god and we’re not watching her through Kyon’s eyes.  The show has tipped toward her, but there’s nothing in the nature of this series we’ve seen yet that tells me if it’s a good thing.  Oh, wait, that “just by appearance” line … did Kyon think that and have Haruhi read his mind?

2 thoughts on “Danmachi and Yuki Nagato 2-3”