DanMachi 5 is an episode where they move a number of currently unrelated plot pieces together, and since the advances are so small it’s hard to tell if there’s any progress at all.  Liliruca is still being hassled for money, but I’m still not certain what the reason is.  She’s still after that knife, too, though at least she feels bad about it.  Meanwhile, Bell accidentally reads a grimoire and now can shoot fireballs, which he then overuses in dungeon and collapses.  And finally (well, it happens early on), Bell and Hestia go on a date and are constantly hassled by other, curious, goddesses.  Maybe something interesting will happen next week.  Okay, the magic thing was pretty interesting.

Let’s see.  Once upon a time, a crazy girl named Aligura took the body of a demon serial killer she was in love with (Brody), pulverized and liquified him, and stuck the goop into Hummer, a handsome guy, to make her perfect soul-mate.  He or they are locked up, and she goes on a rampage to get him back.  Naturally, poor Leo is stuck in the middle, both a hostage and a conversation-mate for Aligura while her big car chews up the city. 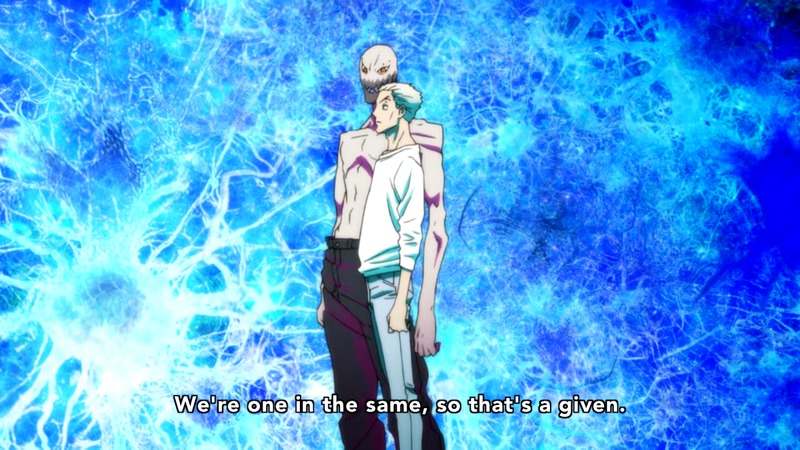 It’s fun partly for the concept of Brody/Hummer, two unalike people stuck together but trying to make the best of it.  Hummer seems like a nice guy and Brody is a serial killer, but with Aligura going after them both they have a good reason to cooperate.  Plotwise it’s more or less straight action except for the conversations between Leo and Aligura inside the (literal) monster truck, having to do with love and how to get the one you want, which ties in with the ghost girl being in a snit at him for … reasons, and what he does about it after the truck is punched out.  And, as usual, the action is crazy and funny, and it’s all fantastic to look at.  As for the overriding story arc, just little steps here and there.

I expected an epic battle in Knights of Sidonia 2 4, and I got it.

The first half begins with Tsumugi trapped inside the mass of gauna, and Kunato, running her, so to speak, goes “Let’s try out those fabulous claws I gave you, Tsumugi.  Heh-heh-heh!”  When I heard that I knew she would be all right, but on the other hand we don’t actually get to see any of it, really the only letdown of the episode.  On the other hand we get a lot of Sidonia pilots blasting away from outside, taking out most of the independent gauna, with the usual amazing sound and visual effects, and that’s fun enough.  And when Tsumugi destroys the gauna from within, it looks like a successful mission for the good guys.  Then Tsumugi, furious at the threat to her friends, lives up to the episode’s title (Rage), and it looks to be a rout, but with this show you know what happens when you think that way.

Sure enough, Tsumugi gets in trouble, Izana injures herself rescuing her, they both retreat, and THEN the gauna does what gauna tend to do, whipping out another Higgs cannon, but deep inside where they can’t get at it, and suddenly everything is in peril.  The firing of the cannon, and Tsumugi’s interference and sacrifice, is one of the most striking battle moments in a series full of them.  I loved the static and noise in the control center as the beam passed.  And then it was nearly topped by Nagate’s suicidal run at the gauna as it prepared to fire again.  Phew!  Well, next week looks to be quieter as we wait to see if Tsumugi’s still alive, or cloned again, whatever.  I think the characters deserve a break.