Show by Rock! 9 finally brings us the battle of the bands, but not before another attempt at changing their image a little until Rom and the rest of Shingan Crimsonz, the most superficial band in the series, tells them they’re being superficial.  Still, he’s right.  They should let the music speak for itself, oh, and have fun.  Meanwhile, Dagger and that guy in the booth have a meaningless chat, and Angelica goes off to get that trad band leader to let her speak to Grateful King, whoever that is.  So it’s all sinister and dark beneath the girls’ smiles.  Meanwhile Critacrista’s Rosia gets overly worried about losing this rematch, with, as it turns out, good reason (but why was she the only one to know what would happen?).  And so the big final story arc begins in earnest.  I just wonder what other little plot bombs they’ve tossed around are going to explode.  Chuchu’s bad vibes for sure; that’s probably next week.  We still have the missing Mr. Berry and that kid in the booth to work out as well, or will they downplay some of it in the end like Aion’s non-story last week?  Who knows with this show? 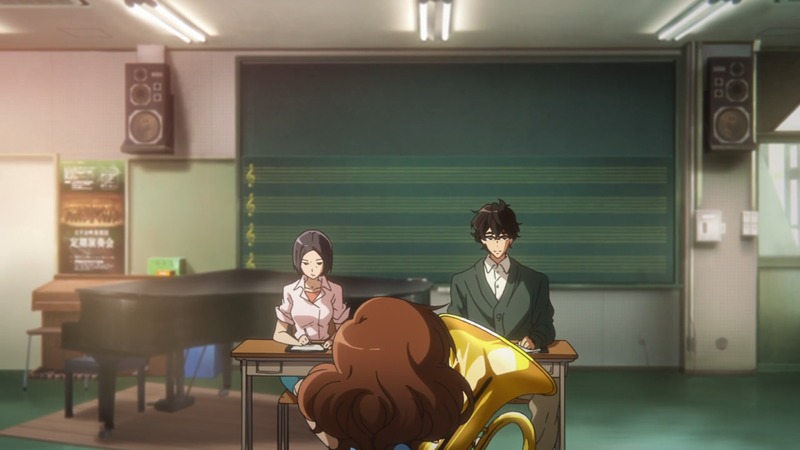 In Hibike! Euphonium 9 we get to the auditions, and while I can’t say the show stretched out the waiting and practicing the past few episodes (it had other bits of drama to play with), it’s about time.  The audition scenes themselves were mercifully brief, with just enough scenes of students breathlessly stressing out, and Kumiko’s audition was nicely handled.  She plays that bit we’ve heard all the euphs play, is asked to play another bit, briefly panics, but then the camera pulls out and peers through the window while we get her voice-over talking about not really knowing how long it all took.  Moments like that can be so intense for the person that they really don’t remember much.

While not prepping for auditions they work a bit with Katou’s rejection in a perfectly normal, sane fashion.  Most of the real story happens at the end, where the 55 members are announced.  I suppose I shouldn’t be surprised that Katou didn’t make it (two rejections in two episodes!)–she is a beginner, but somehow, I was.  I’m sadder about Natsuki, because it looked like she finally had something to play for.  Reina getting first chair was no surprise, but it has a big effect on Kaori.  And so, a brief scene at the end of the episode gives us plenty of emotional story-fodder for the next couple weeks.

Teekyuu 45 turned into the Nasuno Desu! for a week, as it was only Nasuno and Yota, and a soccer match including a baseball umpire and a zebra.  SPG of 3.33, a nice rebound after last week’s dismal showing.