Houkago no Pleiades 11 is a pleasantly confusing as the episodes leading up to it. 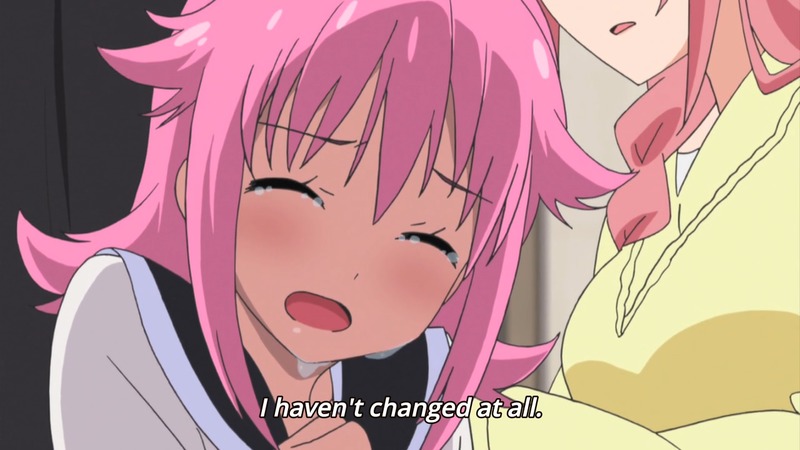 The main confusion this time around is the concept of change.  Suburu, now powerless and unable to see the alien overlord thanks to her adventure with Minato, is told by her parents that she’s changed, though she denies it.  I’ll take this to mean she’s grown up a little.  But she’s not very happy about it, since her friends are off chasing the final machine fragment (using “dark energy!”) and she can’t help them.  Meanwhile, getting that last fragment might be impossible because the universe, tilted in their favor because of their magic, keeps pushing the fragment farther away, which is to say they actually don’t want to stop being magical girls and chase fragments.  That is, until the girls realize this but decide (for Earth’s sake) to keep chasing it, no matter what.  At which point the fragment becomes visible.

That all makes sense.  But then earthbound Suburu starts noticing little things that suggest the missing Minato is still around.  A flower in the weeds, the vending machine offering strawberry milk again.  A classmate vaguely remembers him.  This leads to her eventually opening the right door and poof! (well, actually a whoosh), she’s in Minato’s IC room.  There’s some business with two stars, and then both of them are in space, with the hospital bed, though Minato is doing much better, with new, “different” magic powers and a black outfit.  Then the other girls comically show up, vanish, then come back.  So if she’s changed and has abandoned some potential, unused, what’s she doing now?  Or Minato, for that matter?  By the way, his goals haven’t changed; he’s still after the fragment.  Next week’s finale is going to be interesting.

Mikagura Gakuen Kumikyoku 11 gives us a lot of backstory and the rising threat.  The midterm battles we see are mere asides.

The first part, the love triangle, is pretty straightforward.  Seisa feels, not betrayed, but jealous of Eruna and Otone.  The betrayal came two years earlier, when her BFF, a girl from the photography club, turned on her, and so we get to see those unpleasant scenes that opened the series over again.  I thought before that this show would involve Seisa learning to love and trust again, and while that still might be true, we now know it’s more complicated than that.  She’s in the photography girl’s position now, with a younger girl who loves and admires her.  But she doesn’t have the malice that her upperclassman did, or the desire to fight.  She does, however, have the painful memories, and there’s the fact that she used her magic to seal off the photography clubroom, suggesting that she can’t face the past but is unwilling to let it go either.  … But the magic is waning now.

So is everything at the school that Eruna lives in an alternate universe?  Are the people here just not from the same world that Seisa came from?  That doesn’t sound right.  Either way, we now learn what those strange gaps Usamaru saw last week are–gaps into Seisa’s original world.  Eruna wanders into one, leaving Otone behind, and is stuck in the old photography room with Bimi, who tells her the whole story.  Why he didn’t tell her before I don’t know.  Meanwhile, Shigure and Kyouma have a midterm battle though they both know something’s wrong.  It’s an odd distraction and it didn’t make sense given the characters, especially Shigure.  Looking forward to seeing what will happen now that reality’s crashing into this world.

It’s not just the quiet library scenes with the piano music (Debussy?), though it certainly helps.  I never cared for the fact that this Yuki normally enjoys games and not books.  The original Yuki’s, dare I say, passion for reading was one of her most charming traits, and it felt wrong for her to go around with a portable Playstation in her hand.  And it gave us another reference to the original series, when she entered the library and floated down the aisles … and finds “Hyperion.”  Not to mention the library card, which Kyon got for her before.  All that was missing was that adorable moment when he led her out of the library.

Those are good reasons for liking the episode, but what put it over the top was the searching Yuki was doing inside herself.  The current her is afraid of going away when the other Yuki awakens.  If it happens like that (and her “I don’t have enough data” was something the original Yuki would have said).  Since she is Yuki’s consciousness at the moment it’s a genuinely frightening thought.  It leads to a couple of dreams where she’s watching scenes of her and Kyon together from earlier, but standing apart from them, and there’s also an older-looking Yuki from the future, or maybe I’m mistaken.  The tone throughout all this is still quiet, but the dreams, especially when the memories come of reaching up (to the stars, and for a book), seem to trigger a fundamental shift in her consciousness.  It’s no doubt her subconsciousness doing basic repair work, like the doctor suggested, but it’s beautifully shown in this episode.  … By the way, what was that “Alyosha … that feeling” text refer to?  Is it a reference I missed? 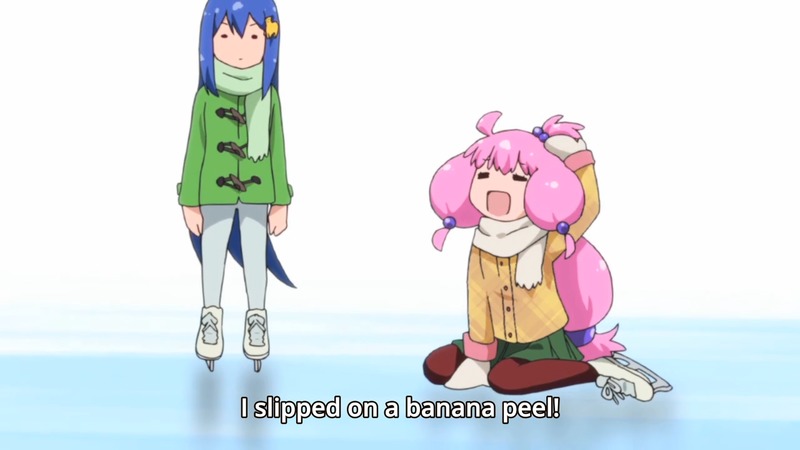 Finally, on Takamiya Nasuno Desu! 11 the girls all go to the skating rink.  It has a combat penguin!  And an SPG is 2.8, which has GOT to be the record.  Congratulations girls!