Time for the new season!  As usual I will give brief opinions on the shows I might watch all the way through.  I’m using the Random Curiosity preview as my guide and will try to stick to that order, but maybe not.  And once again I will give a screenshot of the first couple seconds of the episode.  No reason why, except it’s tradition.

So we start with, oh dear, Okusama ga Seito Kaichou!.  About a guy named Hayato who just lost the high school student council election to a girl named UI, who is smart, capable, and promises to remove the rule about fraternization, so she tosses out condoms during her big speech.  And guess what?  Turns out Hayato and Ui’s parents are longtime friends and the two are betrothed.  And guess what?  Ui has no problem with this, though Hayato does.

And you know, I don’t really care that the show goes the extra step and gives us actual nipples, well, I care a little.  I also don’t really care that this is a terrible, hackneyed setup, because it might be done well.  What bugs me is Hayato.  Not only is he nothing more than a straight man, but he comes off as a pissed-off prig.  And when he has the first set of actual girl’s nipples staring him in the face, there was no shock or even surprise (how they got to this point is too tedious to explain).  Part of the problem is the ten-minutes they give every episode.  There’s no time to allow Hayato to be more than the bitter jerk we see here, or to give Ui anything more to do than inspire the other students and act as a dream girl for adolescent boys.  Nope, not for me.

Next we have GANGSTA.  Not bad.  Not sure about it.

The opener takes its time.  We meed two tough guys, Worick and Nicolas, who call themselves “Handymen,” hang around a neighborhood of Ergastulum, a more-or-less lawless town run by several crime families and watched by an ineffectual police force, given a face for the series by Captain Chad.  They beat up some goons for an old lady (the violence in this show is frequent and casual), hang around some more, then get hired by Chad (on behalf of the mafia) to wipe out a new gang run by some guy named Barry.  There are only two handymen and a lot of gangsters.

Up to this point I had enjoyed what I had seen.  The story slowly opened up for us while we watched Worick and Nicolas go about their business.  I lost some interest when the big fight started because it was completely one-sided.  Nicolas just charges in (with his dogtags, which freak out everyone but the significance isn’t explained) with his sword while the bad guys naturally miss.  Given the grittiness we had seen before I had expected something other than superheroics.  The prostitute’s dilemma was better–what WILL she do?  Worick and Chad, murderers with hearts of gold, or at least not shit, aren’t bad either, and they made Nicolas hearing-impaired and slightly crazy, the former not common in anime at all.  Not a big fan of this type of show, but there was nothing seriously wrong with this low-key first episode.

I haven’t found the next couple shows yet, so I’ll skip to noitaminA’s Ranpo Kitan: Game of Laplace.

After an interlude and credits with glowing butterflies (never a good sign in anime), young Kobayashi wakes up in his classroom with a saw in his hand and the remains of his homeroom teacher, artfully assembled, at the front.  He’s surprised but not freaked out, or even dismayed.  He gets taken in, his pal Hashiba joining him, and we meet various detectives, including the young genius Akechi, who assists the police with crimes like this.  Soon Kobayashi asks Akechi if he can be his assistant, only to learn that there’s more to the dead teacher that meets the eye, and Kobayashi is taken to the station again, but he doesn’t mind because he finds it all fascinating.

I don’t know anything about Edogawa Ranpo, the detective writer who inspired this, or whether it’s typical of his work.  But this story has as much to do with escaping one’s dull existence as it has to do with finding the murderer.  We see it all via Kobayashi, and everyone he comes across, even his friends, is a grey outline until he realizes they’re talking to him.  There’s also talk about how the Japanese tend not to see anything unless confronted by it.  Kobayashi is normally dispassionate, though nice to people, and this is the first time he’s ever come across anything that interests him.  However, his reaction to all this is so cold it’s hard for me to think he’s really human.  He might be as screwed up as Akechi is.

Still, it’s good to look at and they’re handling the mystery well.  Kobayashi’s own deduction scenes are nearly hallucinations and often reminded me of Hyouka, and I’m interested to see him at work.  Akechi is more generic, a super-genius who pops pills and energy drinks.  Still, he and Kobayashi might be a fun team.  I hope Kobayashi gains a bit of humanity before the end, though.

Still waiting for a show or two, I skip to Aoharu x Kikanjuu, where a cross-dressing high school boy, student council president named Hotarou begins his new life of living alone, after administering justice on some school bullies (Despite her appearance, she’s an excellent fighter and, as we are endlessly told, can’t abide injustice).  His new neighbor, Masamune, offends her because he talks about oppai and carries a gun, which we learn during an annoying scene outside her door.  Later Hotarou finds out her school friend got wronged by a host, so he goes to the club to confront him.  Surprise (not really)!  It’s Masamune, who challenges him to a BB survival game to make it up.

During the first half I kept wishing this was one of those ten-minute shows.  Every scene was dull and predictable.  It got somewhat better when they had their duel, though the necessary rules infodump slowed it down, mainly because we really didn’t know who would win, and also because of the inanity of holding it right there in the club, with other hosts and their clients donning safety goggles and looking on like it was a regular attraction there.  But after the outcome it became dull and predictable again.  You might enjoy the survival game bits, or the cute guys (and Hotarou comes off as one), and there are some silly bits, but personally I don’t see a reason to keep watching.

Thought about delaying Miss Monochrome for the next post, since it’s a short, and doing Wakaba Girl now, but turns out they’re both shorts.  Wakaba girl features Wakaba, a rich girl going to a not-as-rich (but still nice) high school, because she’s stupid.  She instantly makes friends and off they go in your usual “cute girls doing cute things” format, giving each other nicknames, etc.

Yes, it’s cute.  The character designs remind me of Kiniro Mosaic a bit.  We haven’t seen too much of the girls’ personalities, but my favorite so far is Nao, or did they name her Shiba, or was that just a quick gag?  Anyway, she gets flustered easily and bangs her head against walls.  Too soon to tell about the others yet, but they’re all cute and adorable, and the show’s under eight minutes, so what the hell.

As for Miss Monochrome, it hasn’t changed. 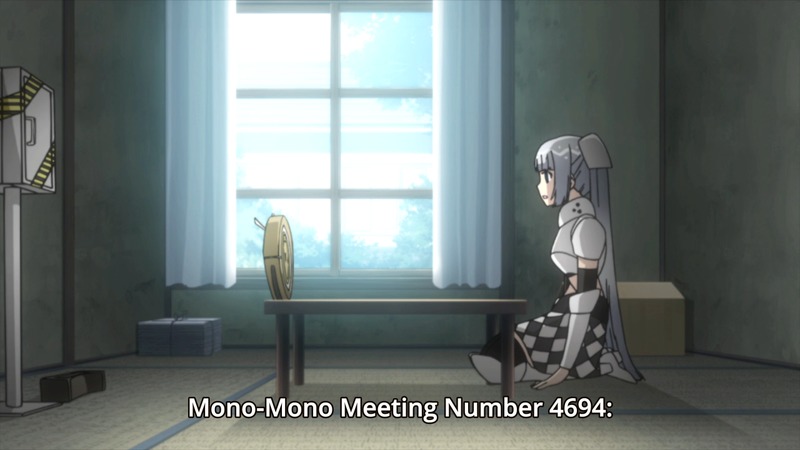 She is still striving to become an idol, her manager misunderstands her roomba’s plans, and unhilarity ensues.  Well, I rather like the OP, and the ED is pretty to look at.