The Disappearance of Nagato Yuki-chan finished up without me even noticing.  Not that there was a lot to do.  Kyon had that dilemma of what to do around Yuki, when the other Yuki had confessed to him.  I liked his strategy, telling her he would have fallen for her (the other Yuki) but saying it when Yuki couldn’t hear because of the fireworks.  Since confessions and lovey-moments happen so often during fireworks it was a nice twist.  In the meantime the show was giving us as many Endless Eight references as it could.  It was maybe the one time I was happy that this series didn’t have aliens or espers in it; we only had to go through the summer events once (though there was a nice tease at the very end).

Now that it’s over and nothing much has happened, I’m still not sure if I would have enjoyed this series much if it didn’t have these references to the old show adding resonance and teasing us with the hope that this was in fact another Haruhi-built world, and that weird and wonderful stuff might actually show up.  I enjoyed it enough.  It was fun meeting the characters again, and even though I was never in the Kyon/Yuki camp, it was seeing what might have happened if, you know, Yuki wasn’t an alien organic interface and all the rest.  That for me is the reality of the franchise.  This show was just a harmless toss-off.

Meanwhile, in Jitsu wa Watashi wa 2-3, we find out that more people in Asahi’s school are weird as hell.  Episode two features Aizawa, the class rep and the girl who dressed Asahi down last year for staring at her.  You kind of figured that she would have a weird secret because there’s a screw in her head.  It’s always visible and makes me wonder if this school is so laid-back that no one would bother to ask her why, or maybe EVERYONE at the school has a secret and thus are considerate to the appearance of others.  Aizawa herself isn’t terribly interesting, just a tsundere who might have feelings for Asahi.  Though I must admit seeing the little Aizawa come out of her head is a good visual moment.

Episode three’s weird girl, Mikan, is a lot more fun, at least at first.  She runs around chasing Asahi to find embarrassing information she can publish in the school paper.  Everyone else–not interested.  Only Asahi.  After we realize this we begin to wonder why she’s constantly trying to humiliate him, a sort of twisted, childhood-friend love?  Turns out that’s exactly what it is, because they more or less tell us.  Well, she gets turned on somehow by forcing the issue and getting Asahi to resist her.  So when he turns the tables and says “go ahead, publish that embarrassing article about me and Shiragami,” she’s completely defeated.  I don’t know if the show should have played this hand so quickly, as Mikan can be fun as hell to watch (also, her secret about her glasses is the craziest one yet), though the episode had too much running around.

Sore ga Seiyuu! 2 is a nice mix of our three heroines’ daily lives, meaning part-time jobs or school and how their respective agencies work.  Futaba’s is the only one we really see, and it’s a bit perverse with its newbie seiyuu standing in a line at the front greeting people and looking up to Futaba because she has a single job.  Nice cameo by Hiroshi Kamiya too.  When he said “kawaii!” it sounded like Araragi-kun talking about neko-Hanekawa.  I was waiting for an “I’m in despair!” when he saw all his fan mail …  The ups and downs of seiyuu life also works well this episode; the excitement over an audition felt real, so did the mind games you play on yourself during the audition itself, and Futaba learning that her character was getting killed off actually had an impact.  Okay, the web radio offer felt a little forced, but it was overall a stronger episode than the first.  Let’s see about #3 … 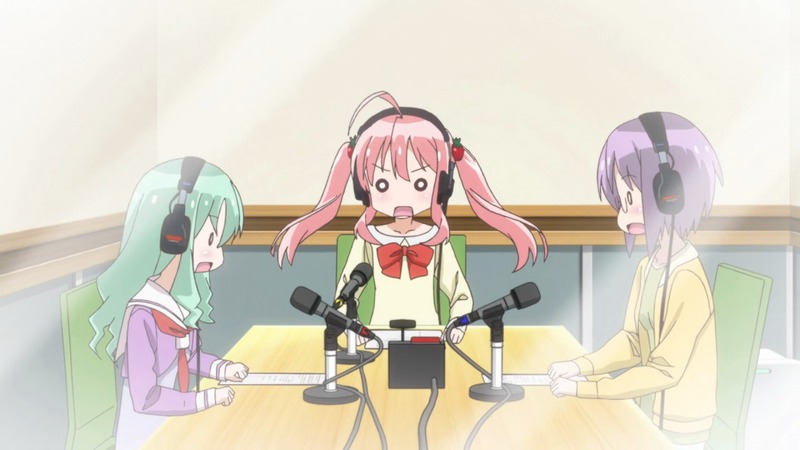 Okay, #3 is a bit of a step back to watching Futaba try something new and be mediocre at it.  At least this time she shares the feeling with Ichigo and Rin, who all contribute to the “all over the place” feel of their first broadcast.  I actually recognized one of the bits from the 4-koma, where Rin innocently steals her Ichigo schtick.  Well, they’ll get better, we expect.  But I can’t really believe that these trained performers would freeze up so much when the time came.  Not knowing who should speak next–okay, other first episode goofs–fine, but they don’t even try to improvise around it, and that’s the most fun part.  But Ichigo’s dad replying to her Twitter followers was a good scene, and I love how they draw the radio director, like he’s from a completely different series.  This week’s celeb cameo, by the way, is Yukari Tamura.  The only one I’ve recognized so far is Kamiya …