Rampo Kitan: Game of Laplace 7 set up an elaborate murder setting consisting of two victims, giant mannequins, gears, and the police and suspects standing around being colorful.  So many visuals going on that it was hard to figure out what was going on.  So, naturally I figured the solving of the murders would take a little time …

Frankly, I was let down.  Weak metal, call in the girl who ordered it, bingo!  Then there was the murder confession bit, and I would have been pissed off by the victims’ behavior too, well and good, but considering all the groundwork they had set up, I was let down.  I wanted more interviews with witnesses, more weird visuals (well maybe not; they had too many as it was), more tantalizing clues and deduction.  Instead, even with a Kobayashi/Hashiba bickering session, there was still half the episode to go.

What they filled it with was a flashback to Akechi’s old friend Namikoshi, who was trying to use chaos theory, Laplace’s Demon, and other math things I barely follow, to create a social … thing, I guess a meme whose rise and effects can be predicted beforehand.  Basically, the origin of Twenty Faces.  You know from the start that it will not end well for Namikoshi, so we’re just waiting for the how and why.  But all we really get was there were flaws in the math, or in the model, but Namikoshi “launched” it anyway.  I’m curious as to how.  A Twitter message?  Facebook page?  So now Akechi is determined to catch all the twenty faces that show up, not out of the belief that he’s partly responsible, but for his ego.  I’m not sure if this all worked or not.  The show, as we saw in the first half, masks its weakness with style, but it provides a nice idea or two.

Classroom Crisis 8 has a school festival in it, and A-TEC is going to launch a water rocket with Iris in it!  It sounds like a fun episode, but the show decides to suck the fun out of it through a variety of ways.  Iris gets a fever, though it’s unclear whether it’s a physical reaction to her horrible flashbacks, or that the flashbacks come because of her fever.  So she lies in bed and has a conversation with Nagisa about her lack of a past.  Then there’s the political wrangling going on, one party supporting A-TEC, the other Kirishina Corp., and there’s more ugliness among the Kiryuu clan, with money being siphoned off and some dark secrets going on.  The only positive note, apart from the water rocket, is that Nagisa and Angelina are a little surprised to find each other sympathetic to A-TEC.  The slow face turn is almost complete, just in time for the corporate and governmental politics to get REALLY nasty. 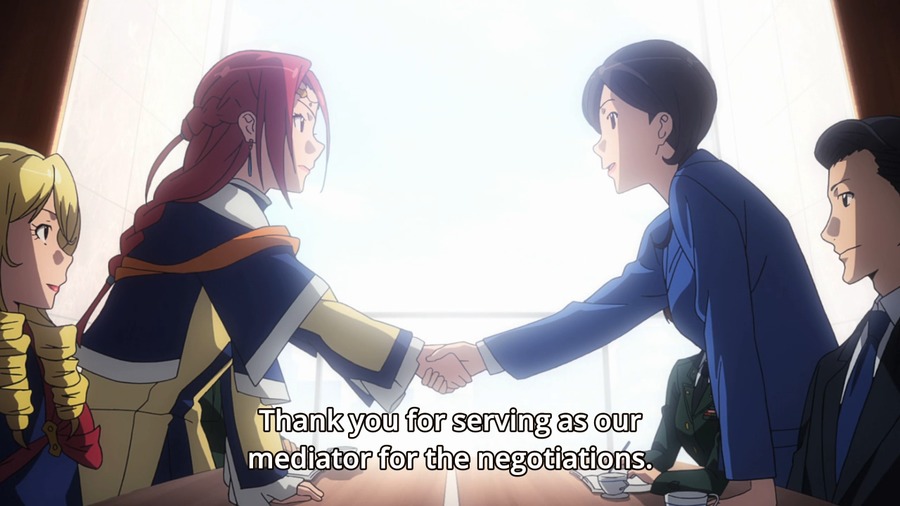 Gate 8 was the amusing episode I think we expected.  The fetish girls see modern-day Tokyo and make some astute comments about it as they marvel.  Then Pina and Bozes go off to talk politics and prisoners with the Foreign Ministry.  Interesting to watch how each side treats the other, and to realize that even back in fantasyland there is politics at play … Which prisoners should they release?  What kind of favors can Pina or the Ministry get out of it?  Pina gets to show off some smarts here after a few episodes of being a lousy general or a figurehead.

But the real fun comes with Youji and the others getting investigated by … whoever’s pissed off at them, notably the prosecutor lady who tosses off a lot of accusations only to get shot down by Youji and the girls.  Meanwhile, those watching on TV or the interwebs fanboy out.  But I can’t just see them just going to a subway afterwards.  Even if it’s to throw off some evil organization we don’t know anything about yet, surely they’d be recognized by somebody.  And surely there’s a better place to take them than the home of Youji’s otaku ex-wife.  Even if the group are celebs and possibly in danger, surely there’s some better place to put them.  Besides, I want the girls to meet some creepy otaku to see how they react.  Still, fun episode that finished before I was ready.