After an episode where they kill off Yuu’s cute kid sister and one of Yuu descending into the depths of despair, remorse, rage, etc, Charlotte 8 tries to make it up to us by giving us a bit of a healing episode.  Yuu happens to meet Sala, the lead singer of ZHIEND.  Stupid coinkidinks aside, it’s rather a nice episode, though there’s almost nothing plotworthy until near the end (they have enough time spend a couple of minutes on Misa’s new music video.  I actually like the song a little).  They walk, Sala sensing Yuu’s tragedy and insisting that she get to light some incense, Nao surprisingly not caring to meet her, though I understand her feelings about it, and they talk some more.

It feels good for Yuu, showing off his good side (and happy to be back in school with his friends), and it feels even better for Nao’s brother Kazuki, who’s busy ripping up the bedlinens as usual when Yuu brings Sala to visit.  I had expected something bad to happen in this scene, but instead we get a good end–Kazuki calms down, and later recognizes Nao.  So Yuu’s helped his own recovery by successfully doing something good for someone, or two people.  As for the plot, there’s Sala’s claim that she lost her eyesight in exchange for rock and roll success, or something, and that reinforces the weird connection Yuu and perhaps Nao have with this band.  So a good, relatively peaceful episode that also tantalized us with foreshadowing.  Wonder how that concert’s going to go next week?  They better show it.

Meanwhile, in Rokka no Yuusha, they’re STILL stuck at the temple.

Well, at least there’s some action.  Adlet manages to let loose another bomb, but it blinds both him and Hans, so they run about stumbling over things for a while.  But then Adlet is cornered again, and it’s talk time.  I don’t think Hans should have lowered his guard so easily, not that it did him any harm.  Adlet might have had good reason not to kill Flamie or any other brave and still be evil, or, as I suspect, the seventh brave doesn’t know he/she’s the seventh and we won’t find out until much later, maybe, at the rate this is going, episode 257.  Well, it’s moot after that “dying man can’t lie” business, which is good enough logic for this show.

While Adlet and Hans were fighting and talking it out, the other pairs were just talking.  Goldof is accused of jealousy when he asks why Nashetania defends Adlet, when he could merely be wondering at Nash’s strange behavior and whether it’s good for the team.  And Maura and Flamie get some bonding time in.  It looks like Flamie’s totally in with the group now.  But they’re still stuck there and suspecting each other until Chamot gets bored and has a nifty idea about killing everybody, more or less.  All I can think is … if it pushes the story out of its funk, let’s try her plan out.

And Shimoneta remains funny even if the story is getting a trifle confusing.  This week we not only have Kosuri show some of her nastier side, but we get a new, er, villain, named Oboro, who was sent as a prefect on lewd matters.  Right now Oboro and the prefects Anna enlists are the more immediate threat, as they’re getting trained on what is lewd and what is not, meaning the students will soon be able to enforce the rules themselves.  Crazy logic since SOX’s goal was to educate the kids on all this stuff already.  It won’t matter much.  Oboro can be instructed to find anything lewd, or NOT lewd, depending on how clever the argument, so she won’t be an enemy for along.  Besides, she dances with the others in the ED. 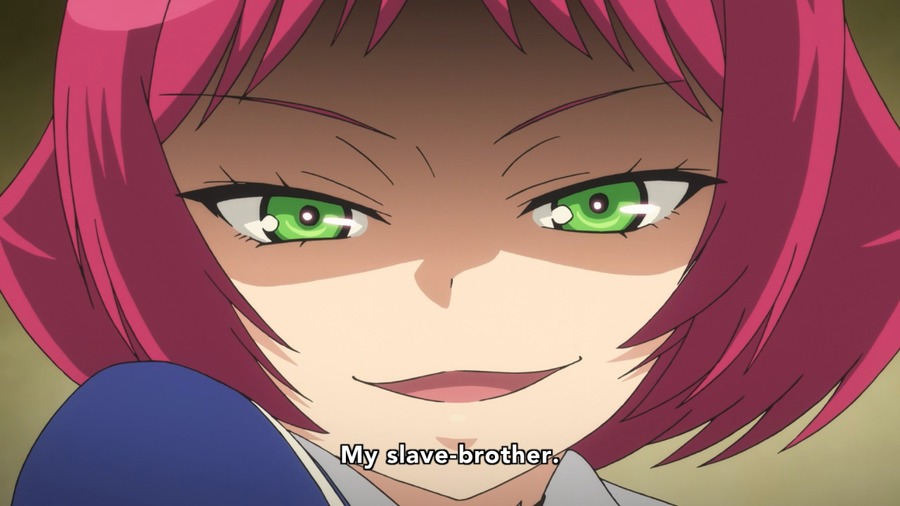 As for Kosuro, they set up Kosuri’s bad tendencies last week, let it simmer, and bring it out in a rather confusing fashion.  She infiltrates another school and messes with the love lives of their student council as she infiltrates.  While this is not very nice behavior, it’s so shoujo that I can’t really feel appalled by it.  The business at the end, where she tries to make Okuma her slave or she’ll … what?  I don’t understand what hold, what advantage she has over Okuma that he would give in to her.  I’m not sure HE understands, either.  Well, she dances in the ED too, so she’ll get straightened around soon enough.

Jitsu wa Watashi wa 8 is two parts with a single, tired theme.  In the first one there’s a make-up home EC class where Asahi and the girls have to make curry.  Everyone does their own character-styled take on the klutz cooking theme and there’s not much to it.  The best part came early, when Aizawa confidently leaped into the battle and made perfect curry, except it was chocolate cake, and that leads us to part two, where Akane threatens the world with destruction by asteroid if she doesn’t get another taste of Aizawa’s curry, er, cake.  A shame that what could have been a splendid series of accidents and coincidences wound up being yet another klutz cooking scene, because Akari wanted to punish Akane for reasons the show didn’t bother to tell us.