I forgot all about Rokka no Yuusha last week, showing how much the show has captivated me.  So I waited for episode 10 to arrive and now I’ll do a two parter, with very little time spent on the first one because it’s more of the same.  Okay, the battle and defeat of Chamot wasn’t bad.  I guess Adlet figured to do something unexpected and quick so that Chamot wouldn’t be able to react in time.  But after that it was more of the locked room mystery.  I can’t figure out the twists of logic that Adlet is working on Flamie and Hans is trying on Maura anymore; besides every time they they make a point the other person says, “Yes, but …” and introduces a bit of factual information that we at home knew nothing about.  At least Nachetanya is working with accidental slips of the tongue in her latest theory (that it’s Hans).  There was one nice moment near the end where Flamie asks Adlet to stay with her, because she wants to try and believe him, basically a person who trusts no one and is living in darkness reaching out to someone.  Otherwise, I think Mutta spent more time in that pod in Space Brothers than these guys have at that temple.

Episode 10 isn’t much better.  First, in spite of her softening last week, Flamie decides she’s going to kill him unless he tells her the truth, so he tells her he loves her.  This has the desired effect for maybe five seconds and then she tries to kill him again.  And so we spend a lot of time with Adlet on the run and others deciding how to handle whatever they’re handling.  Maura sends out a call using her super-voice (which she didn’t bother to use in any situation before) to announce that Adlet tried to kill Hans, making Hans go “Huh?” and so now EVERYONE’S out to get him.  Meanwhile Nachetanya decides all of a sudden that the others are right and goes a little murderously insane.  When Maura and Flamie catch Adlet he does another clever show using a drug, to prove that Flamie didn’t activate the barrier, though again, why not use that before?  Anyway, now it’s Flamie and Adlet on the run and homicidal Nachetanya confronting them.  Just flip a coin, guys.  I don’t care anymore.

I’m pleased that Charlotte didn’t use time-travel the way Madoka or Steins;Gate did, that is, go back in time only to make the situation worse than it was before.

We start with a flashback to jump-backs, as Shun explains what exactly happened.  He jumped back to prevent ability users from getting caught by the still-unexplained evil forces, first befriending Kumagami, then others.  Over and over again he tries only to figure out that what they need first is a few friendly adults and a lot of cash.  And we learn that Shun overused his abilities and that’s why he’s blind.  Sala, her own blindness, and her music are not mentioned, alas.  And we learn, well, Yuu does, that he has that looting ability.  Now let’s go back and rescue Ayumi! 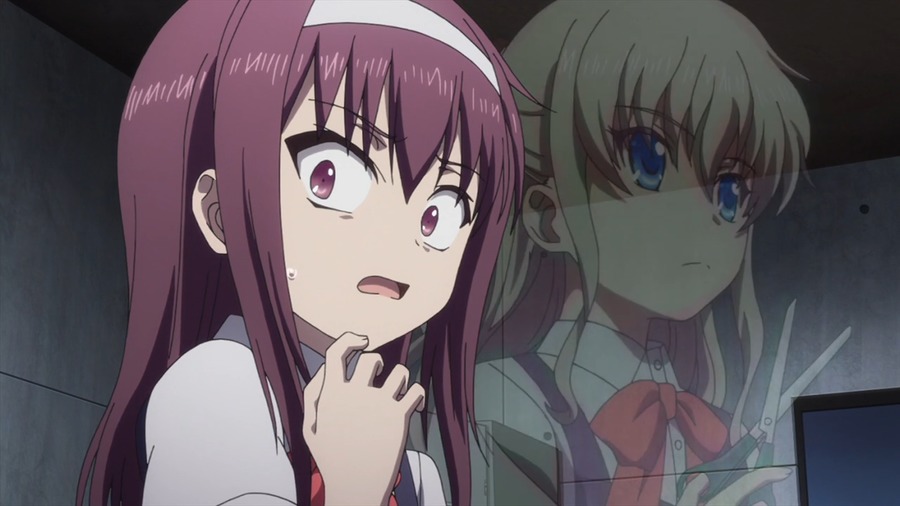 I kept expecting something bad to happen.  But nothing really does.  When Yuu “loots” Ayumi’s nascent ability I was surprised that it was done so matter-of-factly, also relieved.  Then it’s time for box-cutter girl.  A couple of questions: why didn’t Kumagami and Medoki participate more actively?  They seem to come and go depending on whether the plot needs them or not.  Also, how did they know about box-cutter girl?  They never saw the actual confrontation.  How did Yuu know to hide in that locker at that time?  And did anyone think to get the girl needed some therapy afterwards?  Well, it doesn’t matter much; I was too relieved that they didn’t try to pull a Homura on us I guess.  Also, they added some silly comedy when Nao and the others try to infiltrate.  I enjoyed it, again because it hinted that maybe things would go well this time. Even when Yuu and Ayumi were walking home together I thought something bad might happen.  Happily, nothing did.   But in terms of the show: now what?

With Shimoneta 10, it looked like a satisfying end to the Gathered Fabric arc until Kosuri pulls a surprise.

First, Gathered Fabric do their big move and hijack a lot of city buses to get the passengers’ underwear.  This is made more interesting by how our characters, stuck on different buses, manage to subdue three hijackers without even trying or thinking about it.  Each one whips out their eccentric character traits (Fuwa–scientific curiosity, Anna–lust for Okuma, and Gouriki, well let’s not talk about that).  Then it’s time to lure White Peak’s bus to a certain area.  There’s a lot of talk about the finer points of underwear fetishism, done with dramatic spy music and a big confrontation with WP until Kosuri screws it all up.  The fanatical terrorists always ruin it for the rational terrorists, I guess.  As usual, a lot of fun if you don’t mind all the dirty jokes, or that they’re mostly bleeped out.