In Rokka no Yuusha 11, the bad news is they’re still at that damn temple.  The good news is we might actually be close to moving on. 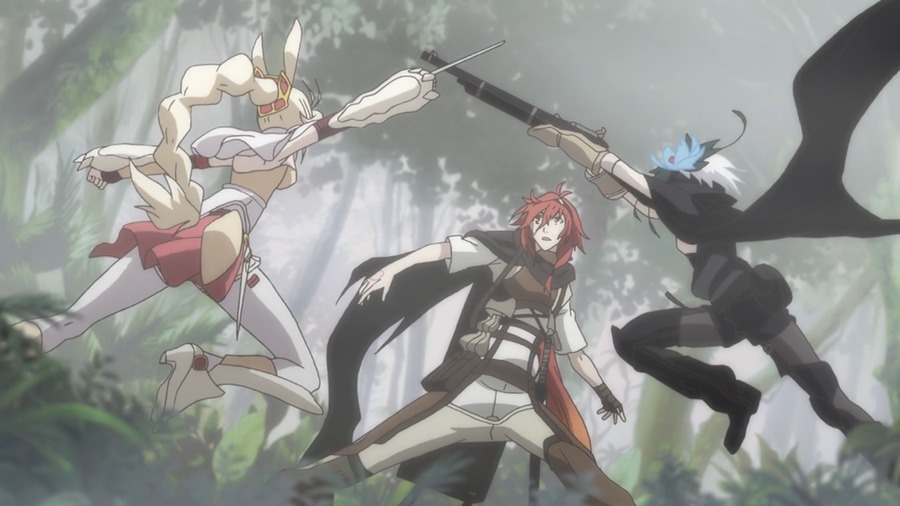 Nachetania, now a little crazy, tries to kill Adlet.  Then Maura and Goldof join in, with Flamie on the other side, and we get a nice-looking fight scene.  Flying metal things, smoke, and bodies fly in the air for a while, while Adlet, who had just promised to protect Flamie, runs off to find Hans while she provides cover fire.  In the end, it’s two against one for both Adlet and Flamie, and both go down, and now, unfortunately, it’s time for more talk.

This whole situation could work well as a locked-room mystery, except instead of a murderer there’s an impostor, but the situation can’t live up to that.  They have to recall a side character we haven’t seen, who can control the sun’s rays and thus create a fog.  In a real mystery the answer can’t depend on something the creators never bothered to tell us.  That’s cheating.  Well, the show never said it was a mystery series, but since they’ve all spent goodness-knows how many episodes stuck at that temple trying to figure out who the seventh brave is, it sure felt like one.  And in true mystery fashion, they don’t bother to tell us, but leave us hanging until next week …  How much you want to bet they don’t tell us next episode, either?

Gate 11 settles down to crank up more story arcs now that the fetishes, er representatives of fairyland, have returned.  And so the episode is split into a number of unrelated scenes.  First we get Pina’s diplomatic initiatives, meeting with Cicero (who’s dressed like a Roman, as is everyone else at his feast, even the Japanese diplomat.  We learn and are not surprised that there are hawks and doves in power, and Pina’s current strategy is wooing the senate.  But nothing more is done this episode.  A shame, I’d like to see the fairyland politics in action.

We kill time catching up with little events, like the camp turning into a town with (so far) peaceful intermingling of races.  Souvenirs are bought on both sides, everyone is happy because no one’s trying to kill them for now.  Meanwhile, Tuka is looking around for her dead father (want to bet he’s not really dead?), drunk Rory comes on to Youji again.  And then the other big story arc shows up in the form of dark elf Yao, in search of the green people because there’s a wounded fire dragon her people want offed.  It hit me then that this series is far from over.  I’m also worried that we’ve seen the last of the political maneuvering on our world, that the interests of three superpowers were polished off with that Keystone Cops scene last episode.  Well, if this is a longer series, hopefully they’ll get back to that.

I was wondering what Charlotte would do now that Ayumi was back, but I had forgotten the outside threats.  This episode was one of those supremely depressing ones to set us up for the finale.  Let’s see, some foreigners, no doubt American, blackmail somebody and manage to abduct and torture Kumagami until he spills the beans on all the other ability users.  So Yuu, the real target, is ordered to go in alone.  Tough for the guy since he thought he would have to spend the rest of puberty in that bunker, kicking back and watching DVDs and losing at Mahjong.  And, though he is sort of a coward, he goes in and pretty much ruins the bad guy’s plans.

So, rather abruptly, the big threat is gone and there’s no big story arc they’re hinting at.  Like each of the others, the show uses the outside threats as a means to mess with the characters’ lives and well-being.  This time Kumagami pays the price (and no more time traveling to fix it), and Shun bears most of the guilt and sorrow.  Trouble is, we haven’t known Shun long enough to really emphasize with him, and while Kumagami was an admirable character, he wasn’t a main one, instead just a helper who showed up when the plot needed him.  Glad he could save Nao, though.  I figure next week there will be plenty of grieving, but what else are they going to do?