In spite of my complaints about the pacing, I found myself looking forward to Subete ga F ni Naru 9, if only because noitaminA shows traditionally run only 11 episodes and so they had to start moving along. This week’s breakthrough by Souhei (complete with “how could I be so STUPID?” lines) was ingenious but it stretched things a bit when they all agreed that the new file would have overwritten the older file of the same name. Some programs will save it under a different name, or at least thrown up an error message. Some would have panicked and crashed–well, I suppose Magata-san was too slick for that. The point is that Souhei had assumptions about Red Magic OS that may not have been the case. At any rate, my theory about what really happened to Shiki is back on the table.

Almost as interesting this week is the Souhei/Moe relationship. Moe forgets about her jealousy over that Tokyo reporter when the intellectual challenge of the mystery comes back. There’s another discussion on the roof, where they seem to bond further, and that’s even before they get into what one of them can “see” that the other can’t. As for that, it was a lovely token of respect from Souhei to Moe, not to mention a display of Moe’s calculation skills, and the best moment of the episode, but I remain unimpressed. Being freakishly good at math doesn’t make you an insightful person. Indeed, Souhei could have whipped up a program find the date himself if he had wanted. That he didn’t shows how much he wanted to show Moe how much he valued her. Kind of sweet, really. And I’m not dismissing Moe’s skills, either. In Hyouka, Satoshi would disparagingly call himself a “database,” but we need databases sometimes. I just don’t think at this moment Souhei absolutely needed Moe to be a calculator. 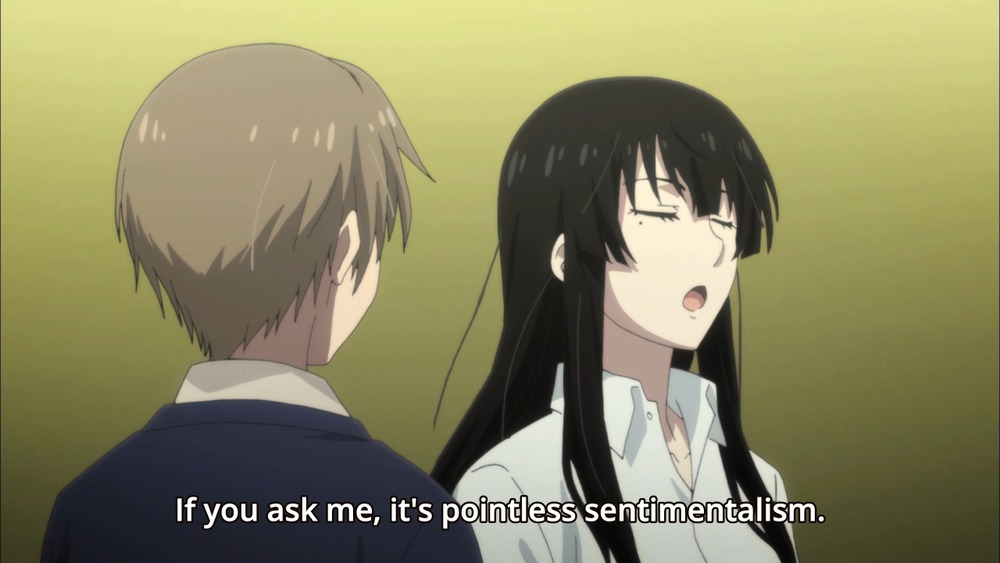 Sakurako-san 9 is a sentimental and rather dull affair, all about grandmas, with Sakurako, Shoutarou, and Yumiko’s trying to figure out which painting her dead gran wanted to give her, and then why Shoutarou’s gran insisted he bring a certain type of pudding when visiting her in the hospital. The latter “mystery” was a tad darker, since it gave us an unpleasant insight of what the cancer was really doing to her. I liked how the insight came from Sakurako’s own “gran,” showing where some of Sakurako’s formidable reasoning may have rubbed off from. It was all very sweet, and distracting because there are bigger arcs afoot, like what the hell Sakurako was talking to herself at the end, and that girl with the metaphorical butterfly wings.

35 Shiken Shoutai has short story arcs, so it’s fitting that their filler episode stories are so brief we can fit two of them in one episode. Too bad neither of them are much fun. In the first one everyone goes undercover at a hostess club to catch someone, and you can imagine the jokes, no, really you can, it’s that predictable. It does get better when Takeru accidentally puts on the drunkenness ring, but that’s because the seiyuus get to do their drunk voices. In part two they get to practice their underwater gurgling voices when they investigate a beach. Gee, a hostess club and a beach … Could it be the creators just want to put the female characters in sexy outfits? Nah. 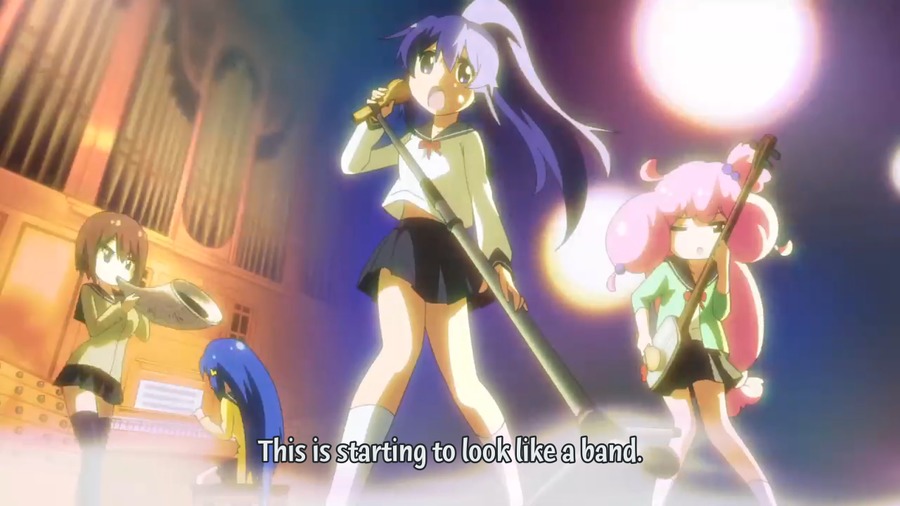 In Teekyuu! 69 the girls decide to form a band. All those episodes and they haven’t done this before. I’m impressed. And with at 2.64 SPG the show continues to be in fine shape.