For installment 3 we start with Dagashi Kashi, which made me laugh more than the other shows put together, well, so far.

We have high school boy and budding manga artist Kokonotsu being told by his candy store in a small town owner father, You, that he must take over the family business, or rather, he wants him to.  Of course, Kokonotsu doesn’t.  Enter Hotaru, oddball daughter of a famous candy store company owner who wants You (who is a candy legend, whodathunk?) to join said company.  You doesn’t, unless Kokonotsu takes over the candy store.  So now Hotaru has a goal.  Along the way we see how nutty Hotaru and You get over snack combos and just about anything else.  And the nearby cafe siblings Saya and Tou aren’t completely normal, either. 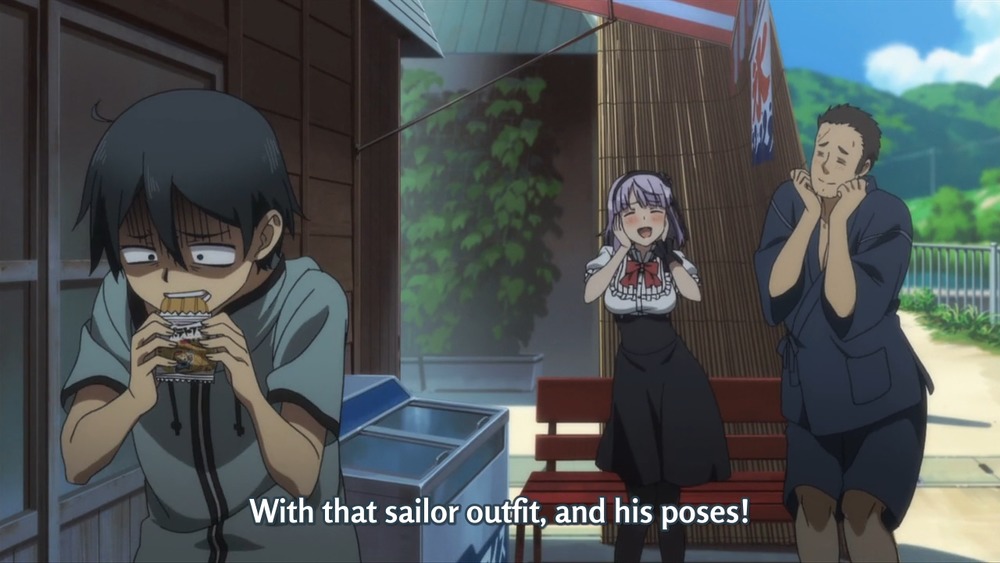 Sometimes it tries too hard for a laugh, throws in too many comic effects (like Hotaru’s retelling of her mission in legendary terms), but most of the time he humor is right on target and agreeably weird.  The way I see it is that the characters in that town were fun to watch even before Hotaru showed up with her own brand of weirdness.  I like how the characters look, especially Saya in jealous mode, and how they interact in small-town style.  The biggest drawback is that I won’t understand some of the candy references, but that’s a mild quibble.

Divine Gate stars … hard to tell at the moment.  To start we follow Aota, an “adapter” who can wield water, as he mutters lots of rain and tears metaphors, but then we turn to the much happier Akane and the green-haired girl whose name I didn’t catch.  They’re also adapters.  Aota stops a berserk adapter on the train and mutters more cryptic things to the other two when they arrive.  The rest of the episode shows us the repercussions of the train incident, as the fur-collared (never trust those guys) principal wants Aota to enter the adapter academy and tell Akane and GHG to recruit him.  All the while some of the adapters reach out to an invisible wall, the divine gate, which isn’t supposed to exist. 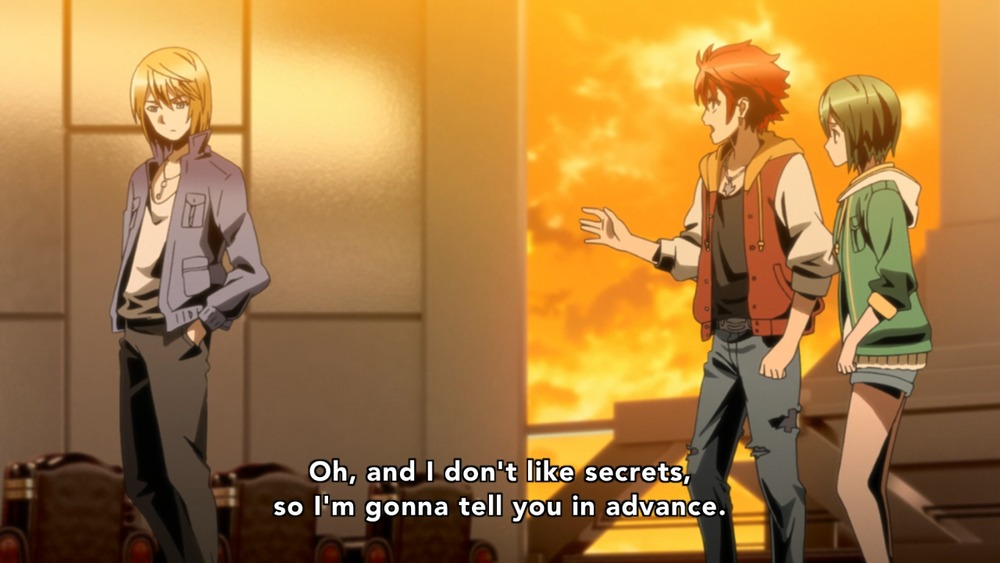 Looks routine, but the show has some good points.  Aota has a dark and tragic past, yet he’s not a complete asshole.  He might say a line like “What will you do with your powers?” to Akane, but he doesn’t have an “I know more than you” attitude about it.  More like he’s been mulling over the question himself.  I just wish he would shut up with the water metaphors.  Akane and GHG seem like decent sorts.  Apart from one ridiculous speech by the madman on the train the show does a decent job of settling us in without overexplaining.  And there’s some interesting mysterious things going on.  It looks good too.  Worth another episode.

Oshiete! Galko-chan is a series of short gags sketches involving three girls, the amply-endowed Galko, the plainer Otako, and Ojou, who is much like her name suggests, but nicer.  The first episode had the girls discuss aureoles, butt, pubic hair, and hair on butts.  Oh, and Japanese literature.  Many of the subjects start from the boys conversations the girls overhear. 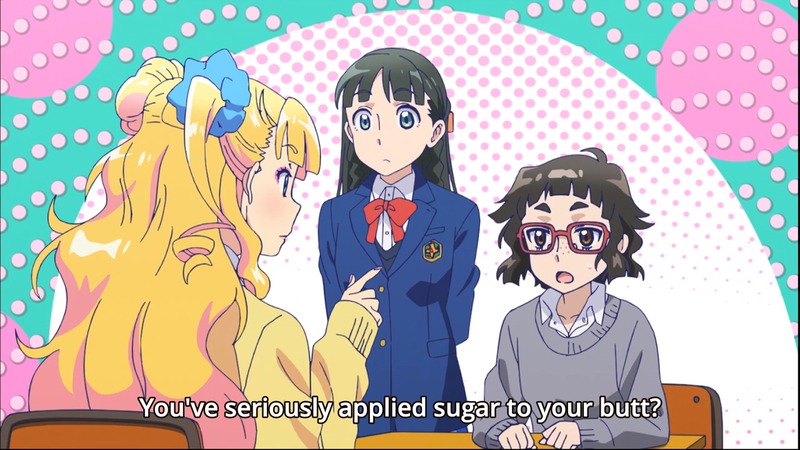 Mostly a miss.  The body part themes usually end with Otako and Ojou speculating why Galko reacted so weirdly to a body part question, implying that she has a deep personal interest in it.  Eventually the show will run out of body parts to joke about, and what will the girls do then?  Though the butt-hair gag was well-timed.  And I liked Galko’s reading the Japanese text in class and really getting into it; it gave her character another side it desperately needs.  Finally, the show gets points for even talking about this stuff without a guy around.

Koukaku no Pandora …  Shirow Masamune wrote this … We meet Uzal, a cunning and suspicious woman, as she meets Nene, an average teen girl except she’s a cyborg, which interests Uzal greatly.  Also Uzal’s “pet,” Clarion, also a cyborg, the cute little monotone girl of the group.  They’re on their way to Cenacle island, a high-tech tropical resort.  Immediately, bad people wearing silly outfits try to blow up Uzal, and Nene helps fight back using cyborg tricks including something out of Chobits. 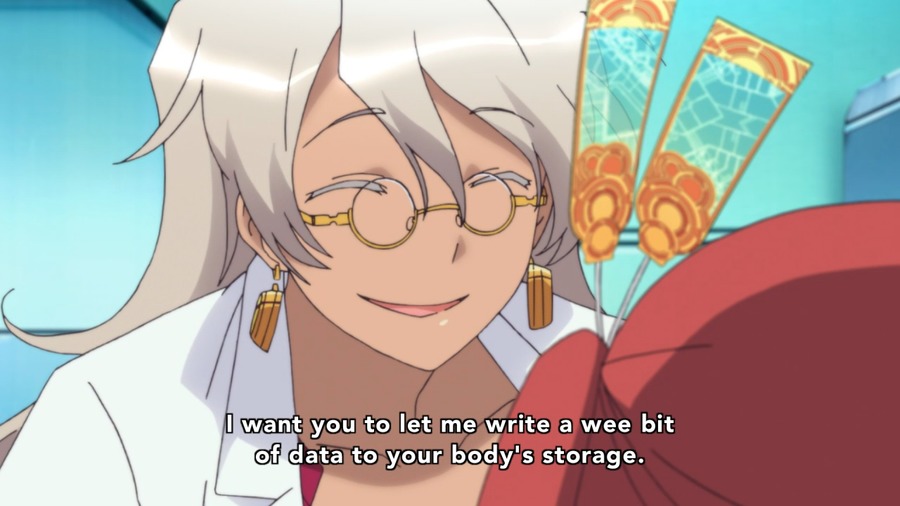 It’s stupid, cute, and violent.  I enjoyed the cute girl with guns mixed with cybernetics approach.  I also enjoyed Uzal because we don’t know if she’s friend or foe.  She seems to genuinely like Nene but isn’t above stealing tech secrets from her body when she isn’t looking.  Nene is a typical nice girl, but her cyborg-ness is the most interesting thing about her.  Clarion is the source of cute and isn’t bad at it, even when her arm’s been torn off.  But I can’t see what they’ll do for an entire season.  We’ve gotten most of the gag themes already.  The only variation will be what new os patch Nene will get next.  But I’ll probably watch until the concept gets boring.

In Sekkou Boys we have former art student Miki, fleeing art because she had to sketch sculptures the whole time, getting the job at a talent agency managing their new idol group, four statues.  You knew this already, right? 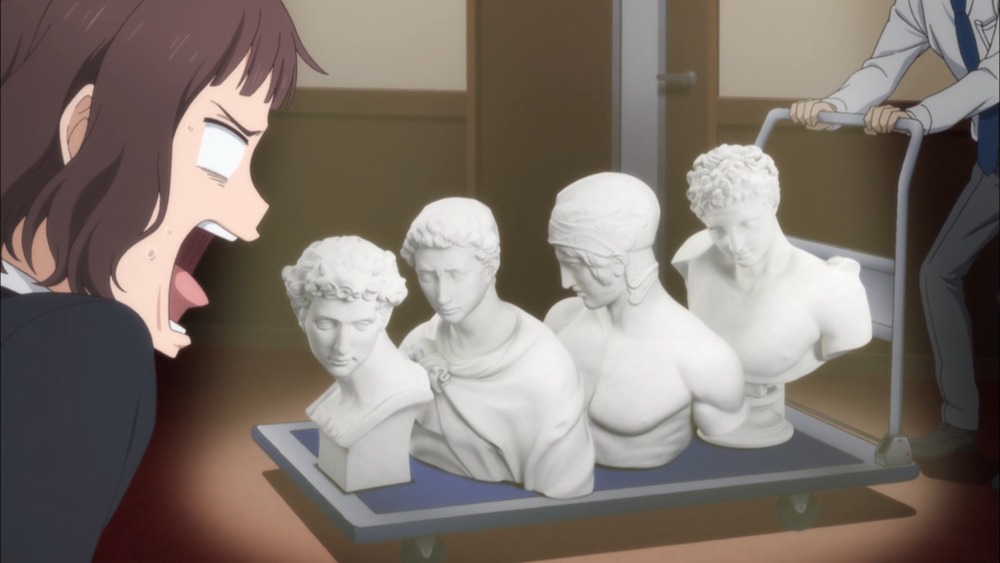 Best moment of episode one is Miki’s speech about how sick she is of statues.  Nice work by Kokido Shiho here, even if we knew the punchline already.  But otherwise it’s just setting up the story, which of course we already knew from previews.  The seiyuu playing the statues hardly have any lines this week.  What will the show do next?  Will they set up a little story each week to poke fun at the idol business?  Will other statues show up?  No idea.  Wait and see.