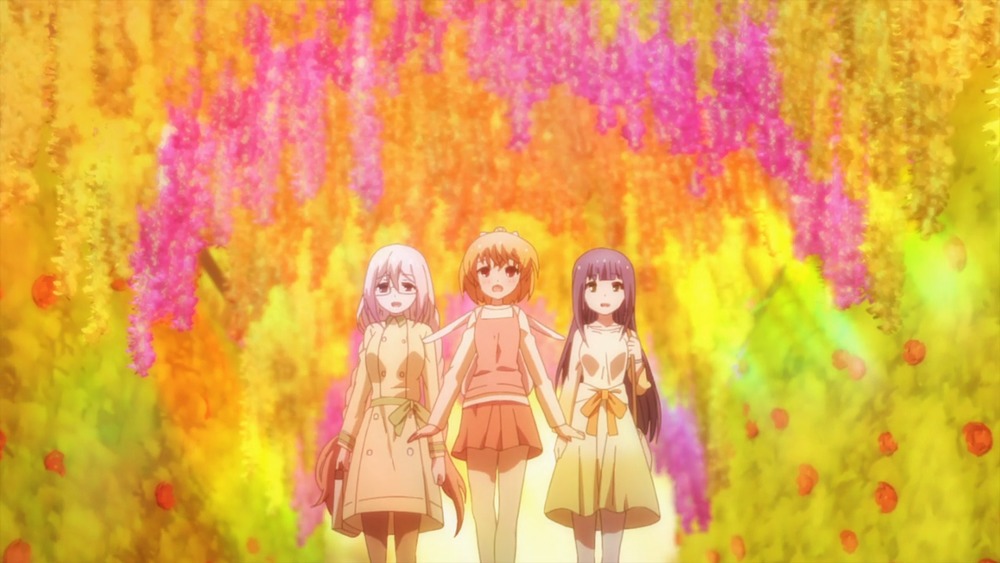 I was thinking I should drop Anne Happy, but then they come up with a nice episode 4. As punishment for finishing last the week before, they must go around and take pictures of specific things in town, which in Anne’s case means a flower of the dawn or something like that. On the way there are the usual attempts at humor (really, Botan’s frail schtick ought to be retired), such as Anne’s bad luck (also tiresome), Ren and the cats (cute), and Hibiki’s tsundere moments (not bad, but overdone), but there are also lovely moments like the endless flowers on top of the hill, almost at times reminding me of Aria, and I said almost. But finding the flower of the dawn at dusk … well, the sun wouldn’t be shining in that direction. I thought it was a setup for a gag, but it never came. 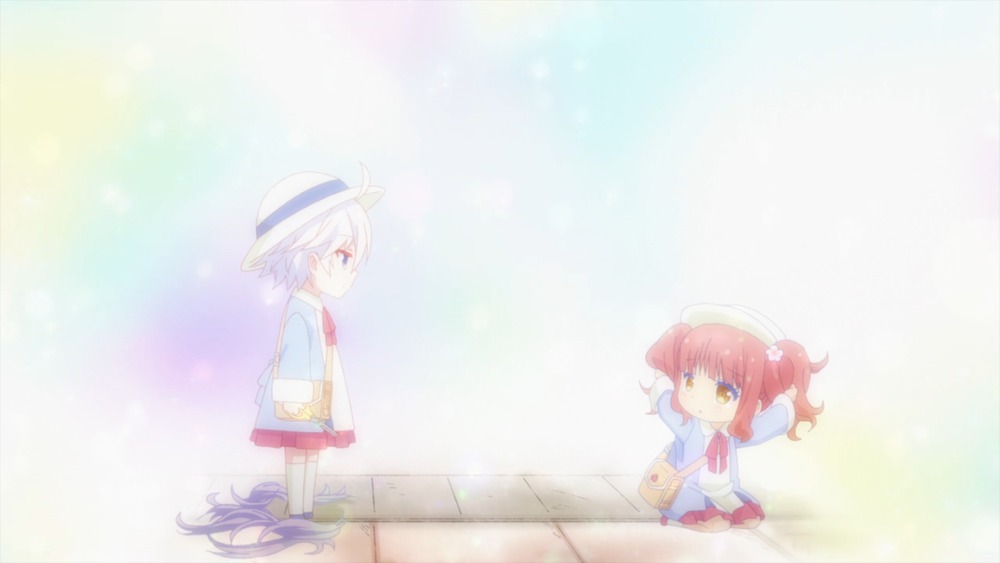 Episode 5 makes me think I will drop it from my review list, though I might keep watching. It’s by no means a bad episode; it maintains the sweetness of the previous one. Basically Hibiki tries to go to school by herself, meaning she gets lost countless times and runs into the other girls, who are all doing their usual things like staring at the handsome bowing construction sign man or getting attacked by adorable kitties. Botan is met elsewhere, since she can’t even put walk down her own hallway without breaking a toe. But it’s mostly about Hibiki’s devotion to Ren, who would always lead her to school when she gets lost, and even cut her own hair to calm Hibiki down. To make sure it’s not TOO touching, Hibiki shows her tsundere side to even things out. Yeah, not bad, but I’ve got too many other shows to write about.

Kuromukuro 4 is, as I guessed, a fish out of water episode in which Kennosuke tries spicy curry, refuses to wear boxers, and marvels at the Tateyama mall (Tateyama is the beneficiary of scene-porn this week, though we get more glimpses of Toyama castle while they move the mecha). I don’t really like fish out of water episodes and I wish they’d drop the little people inside the TV screen, though the ferret on the rhoomba wasn’t bad. Story-wise, Kennosuke makes the connection between Yukina’s father’s demon research and the things he fought the other day. Good for him but for us it was obvious from the start, and while Kennosuke has to go through these discoveries, we don’t. Worse were the two reporters hassling Yukino for no reason I could see except the show wanted to infodump stuff we already knew on us.

Episode 5 keeps up the predictable waterless fish bits, this time in high school where he, in true anime form, transfers into Yukina’s class. A couple things make it tolerable. First is Ken’s (heh) frustration over looking up one word in the dictionary only to encounter another word he doesn’t know. The other is the inevitable “Ken and Yukina sitting in a tree” stuff from the classmates, which for some reason I find rather cute in this show, but not in others. It only increases when Yukina gets into Kennosuke’s hovercar and they drive off. Too bad the jealous kid is going to follow and inevitably complicate the big battle coming up. This show can be fun to watch, but it’s in spite of the overused plot devices. Another battle next week, but it looks to be south of town.