Netoge no Yome wa Onnanoko ja Nai to Omotta?, like Anne Happy, was an show I thought I might drop, but episode 4 wasn’t bad. It started with more of Ako’s confusion between the game and RL world, which would be fine if they were going to force in a deeper, show-altering plot, which I don’t think it would do well, but in the second half the episode got aimless and quite enjoyable. Schwein and Master aren’t around, so Rusian and Ako do some game touring and sightseeing, rather like a RL date, something they both realize. Nothing much happens, but it had enjoyable encounters like meeting their advisor and her old guild. There’s a start of a new story when they meet a utter newbie and Rusian shows her some basics, rather like he did when he first met Ako. Sure enough, now this girl’s stalking him, and it’s certain that this is actually Nanako, a RL classmate. So it looks like some jealousy and possible triangles in the works. … Mind you, if either this show or Anne Happy have bad episodes this week I’ll probably drop either or both.

And after episode 5 I’m still on the fence about this one. The episode wasn’t bad. Ako pulls herself deeper into her shell after seeing Rusian with Sette, who is, of course, that pink-haired girl. Hideki decides to follow her into NEET obsession if that’s what she wants, thus prompting her to realize that it’s indeed NOT what she wants. It alone wouldn’t keep me from dropping it, but I couldn’t get over the moment when Ako repeats “Team … Deathmatch!” completely out of the blue and had me giggling for a good minute. 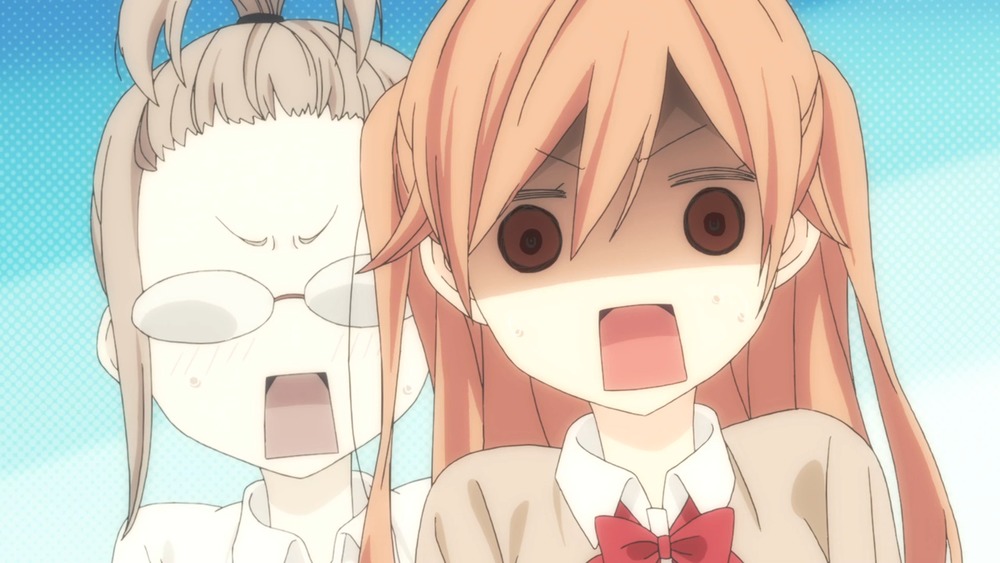 Tanaka-kun wa Itsumo Kedaruge 4 formally introduces Shiraishi to the group. The perfect student, beautiful, smart, kind, hard-working, but it’s mostly a front. Normally she’s frumpier and wears glasses and a longer skirt. This is “discovered” by Tanaka and Ohta about halfway through the episode, after some aimless scenes that are just as entertaining as what comes after. Tanaka and Ohta now have an excellent, low-energy timing between them, and Ohta can even hold his own with his deadpan replies. Naturally, when they discover Shiraishi’s shameful secret, they say nothing, because Ohta didn’t even recognize her and why should Tanaka expend the energy to say anything? We sort of guessed this, so Shiraishi’s silly stalking was pointless, but again this show managed to make it all funny. A nice comment by Tanaka put this one over the top, when he suggested that her perfect persona might drive some people away.

Episode 5, like the rest, is a delight. In the first half Tanaka and Ohta prove they can hold up the show by themselves as they go shopping, though Tanaka has forgotten what to get. An unexpected sidelight is Ohta’s shopping brains impressing all the housewives. But after that it’s time for Shiraishi to shine again as she realizes she might be falling in love with Tanaka. There are endless amusing bits invented out of nothing, like the “oh” that Shiraishi’s friend says when she admits it, and the sweetness of the whole situation. Getting Tanaka’s love might be impossible, but thanks to “master,” she’s gained a couple of new friends, something the most popular girl in school thought would be impossible a short while ago.

HaiFuri 4 reveals (to us) the reasons for the mutiny on Wilhelmina’s ship, probably what is up with the Musashi, and even why the Harekaze got attacked in the first place. Too bad no one in the show has figured it out, and why would they? A red-eyed rodent-thing isn’t the type of animal that you would expect to cause so much trouble. Well, it led to the best scene: quiet Tama going utterly bezerk and attacking ships that were just bringing them supplies. However, I hope the show’s main villain is something more nautical and warlike. And I hope they can base their stories on things other than running out of toilet paper. Honestly, the girls can’t go 26 hours without it?

… and it’s turning into another show that I should drop but I can’t, not yet. It’s frustrating because the stuff that keeps me watching, time-wise, is a small fraction of the episode’s length. We have the mystery of the rodent, who can apparently send electromagnetic pulses or something, enough to screw up both electrical machinery and human behavior, but they’re no closer to figuring that out, much less fingering the rodent. And we have, at the end, Akeno, swimming in a battlefield, a good cliffhange. Yet to get to this point we had to put up with an aimless swimsuit scene or two, a welcome party for the German girl, seems superfluous, and little character quirks by as many of the cast as they can throw in. I am officially sick of the navigator’s whining, by the way. I’m just waiting for an episode to have a flat ending so I’ll have my excuse to drop it.