Macross Delta 11 gives us the aftermath of the Windermere attack for both sides. For the bad guys, they’ve unlocked 60% of whatever power they’ve going to use, so they start preparing for a bigger invasion to take over the last couple of ruins. I’m not sure if that’s what Johnson is telling Arad when he shows how Windermere can blanket the galaxy with their network should those last ruins fall, but it amounts to the same thing: Windermere wants the ruins and our guys must defend it. More pressing is the idea that Heinz and Mikumo/Freyja made contact in that scary space last week, and both sides think the other did it on purpose, a nice wild card, as is that old geezer rising from his deathbed to command that big ship for the invasion.

Meanwhile, the good guys have no choice at the moment but to say goodbye to Messer, both by staring out into the sea a lot, and by doing a jellyfish wake where they speculate on the type of man Messer was, and what they each should have done to prevent his death.  And they agree to strive to do more.  I don’t think they have much of a choice in that, since the bad guys are beginning their offensive.  It’s a nice scene, with an acapella song thrown in.  Frankly, the way the war is going I wonder if it’s the last relatively happy scene we’ll have for a while. 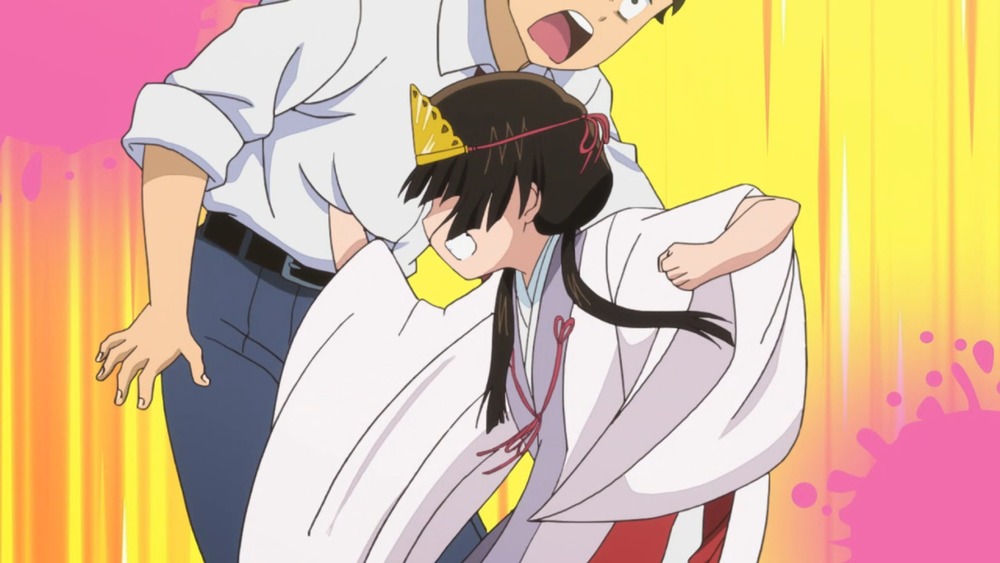 We get two extremes in Kumamiko 11. On one hand we have Yoshiro, who only treats Machi as a tool to get what he wants, even if it means putting her in an idol competition the poor girl can’t handle because of her self-esteem issues. On the other we have Natsu confessing to a holy rock that he wants Machi to stay as she is and stay in the village forever. No one has considered what Machi wants, even if she doesn’t know what she wants. Why hasn’t anyone taken her to a big city before? Okay, she couldn’t even go into a Village Vanguard earlier, but she seemed fine with what little she saw of Sendai before getting to the audition venue and letting her nerves overwhelm her. Let her take little steps; don’t just fling her into the deep end of the pool. And of the two extremes, they are both wrong, except at least Natsu’s feelings come from love, while Yoshiro is a manipulative little prick, which made the screenshot above so satisfying.

Bakuon!! seems to be out of plot, apart from what bike Chisame should get, and that takes only one-third of the episode, if that. What’s more, such as the haphazard way this show is put together (and I mean that as a compliment), they put it last, with Chisame quoting a racing legend that motorcycles aren’t meant for the road,” but scooters are. So that’s that. Glad she’s happy. The first part deals with cyclists and their obsession with how much their bicycles cost, led by an asshole who cuts off Onsa to prove that bicycles are the kings of the road, and gets some justice for his reckless riding. The middle part is the silliest and best. Onsa accidentally eats some of Rin’s drool and catches “Suzukiphilia,” and it’s one of the funniest bits the show has brought us yet. But actually the entire episode is full of little funny bits. Switching the names on a generic bike, sumo wrestling to decide what bike Chisame will get …