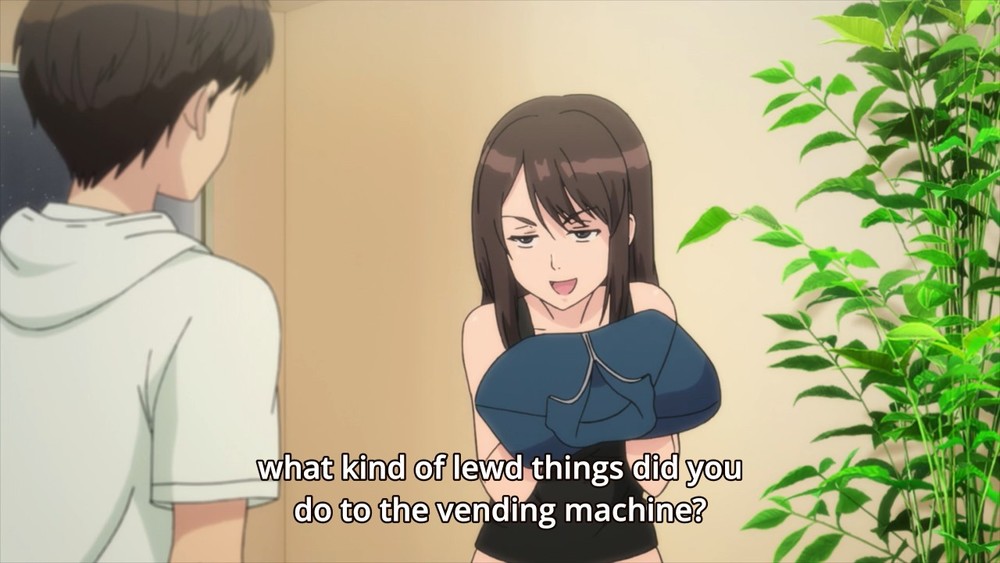 Catching up with second, okay, and the third week, starting with Seiren, where we left our hero Shouichi getting freaked out by a girl crawling into his bedroom late at night. Turns out to be Tsuneki, of course. Her parents threw her into this study camp and she tried to escape. Soon Shouichi is lending her his sweats, leading to lewd rumors about the two, which Tsuneki happily plays up, partly for the fun, mostly for the fun of messing with Shouichi. I thought for a while the theme for this romance would be aromatic sweats, but it might be domestication. Not only does she cook for Shouichi (okay, and Ikou and that nice girl who looked a little disappointed when she learned her new friend wasn’t a slut), but she does his laundry, too. Well, she’s been wearing it … On the romance front, the two have bonded and you can see romantic thoughts forming, but nothing tangible yet, no belly-button kissing. Okay, unfair to always compare this to Amagami, but I have to say that Shouichi still has some work to do catching up to Junichi.

Youjo Senki 2 gives us the inevitable backstory, where we learn that Tanya was once a modern-day salaryman and complete asshole on our world, cheerfully firing people and plotting his way to the top, until one of the fired people decides to push back, so to speak. There follows, frozen in our time, a strange conversation with God over the existence of God–which for some reason pisses God off–and he awakens as baby Tanya, and Yuuki Aoi’s voice takes over, an amusing contrast.

Little Tanya is about as nasty as the salaryman was, but all she wants is a quiet, easy life. Ironically that means joining the military, no lessons taught him about the disparity of wealth. The best scene comes later, while on a training mission she gets her first taste of battle. Some odd moments here, among them Tanya’s brief lapse into despair until her blood-lust awakens, her ability to out-fly five more experienced soldiers, but mostly the self-destruct thing that she does later. Not only did she not self-destruct, but she said as she fell that looking like you fought hard and then leaving the battlefield is the best way to get by, but she DID fight bravely, and sustained injuries. They were right to give her that medal; why was she so surprised? Well, it was a good episode.

Episode 3 has Tanya being transferred to an instructional division, which she likes, but it means she has to test new magic jewels, which she doesn’t, especially when the damn things prove to be unstable and blow up in the sky. She manages to get those experiments shut down, but that leads to God getting pissed off and fixing it by “blessing” the jewels so that she has to do a prayer in order for them to work. Whereupon I started rooting wholeheartedly for Tanya. A god that demands faith and punishes those who refuse to worship aren’t fit for the office of deity.

Demi-chan wa Kataritai 2 shifts the focus to Kyouko the dullahan. It’s about as sweet as the first episode. Takahashi is nice to her, after the initial shock, and Kyouko quickly gets a crush on him. Hikari can’t help but meddle and soon Takahashi is doing an experiment (actually a date), but with Kyouko’s head only. Hikari is messing around with Kyouko’s body. It sounds dirty but it isn’t, though the show does briefly tease the thought of the advantages and disadvantages of sex with a dullahan. They also touch on interpersonal relations on a more mundane level, like the initial shock and discomfort that strangers might feel, and as a side note I’m surprised that the people Takahashi and Kyouko see on their “date” don’t do more double-takes; there are only three in the world, after all. The other thing that bothers me is that Takahashi is a little quick to explain things that Kyouko ought to know already, like how to hold the head while walking to prevent motion sickness. Surely Kyouko knows this already.

Little Witch Academia 2 has Akko starting classes, interesting and boring, and news that no one knows where Shiny Chariot is and no one really cares, especially the talented rival Diana Cavendish. Naturally this inspires Akko to defend Shiny’s honor and the humiliation that comes with it. All expected. Then, also expected, she gets some redemption, with the sick Jennifer Memorial Tree. Episode twos are often this uneventful–introduce some side characters, maybe the rival, make hints about the main story arc if there is one. As for the latter, much more interesting than that tree, we know SC is missing and Akko never collected that one card. Though I’m much more interested in that tower near the school. It’s been a long time since I saw the original show, so I forget what it’s all about.