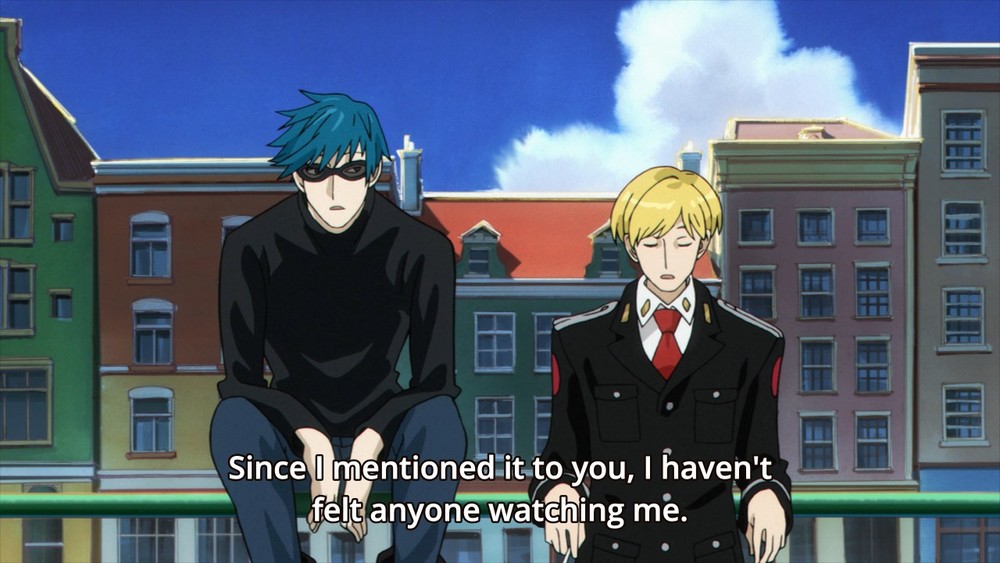 ACCA-13 2 has the political intrigue moving along, gently, unnoticed to Jean, or so it seems. Grossular, the leader of the Five Chief Officers, either thinks Jean is plotting a coup or wants to set Jean up as a fall guy. Whatever the reason, it means Jean is being tailed. Jean notices this but seems indifferent, simply asking his old high school buddy Nino to look into it. But Nino is not what he seems. It’s hard to figure Nino out. He seems talented at doing his spy job but you would think he would know Jean well enough to know he’s not plotting anything. Unless Jean really is and he’s trolling everybody. I wouldn’t put that past the show, either. Meanwhile, the show keeps its wry touch, both with Rail developing a crush on Jean’s sister and stalking her while Nino stalks Jean, and the absurd giant food omiyagi Jean brings for his staff (this show loves its food–after watching I either want to eat or smoke), and the giant bread he gives to Mauve, who requests a meeting, meaning there is plenty more intrigue to come.

Kobayashi-san chi no Maid Dragon 2 introduces Kanna, a cute little girl dragon who claims she came to find Tohru, well, that’s partly true, but in reality was shut away from home for being naughty. We spend the episode watching her interact with Tohru and Kobayashi. More fish out of water scenes, but it helped that she was kept in line by the two adults. And we get a nice scene when the two dragons start roughhousing with lots of explosions and noise, quite a contrast from the gentle comedy scenes the show mainly has. Also a nice scene where Tohru and Kobayashi go shopping–the former is already good friends with the local merchants. It looks like the show is mainly going to be little scenes like this, with brief comic gag bits mixed in, while hinting at a larger story, and that’s find. If I get bored I’ll try to decipher the odd scene switch bits, those triangles and circles and ampersands and the like.

KonoSuba2 2 has Darkness in the lair of that lord, so the show mostly works around her, first by introducing a cat that Megumin adopts called Chomusuke (that name must be a joke I don’t get). I figure the show will be about the cat, but all it does this episode is hang out. Then there’s some messy toad-killing, which introduces Yunyun, who keeps challenging Megumin to duels, leading to some embarrassment for both. The best scene for me was Kazuma and Megumin, covered in toad slime, fighting over who gets into the bath first. Accusations of uncivil behavior and pronouncements of gender equality ensue. We never really do get back to Darkness, but I’m sure she’s having a good time.

Seiren 3 is mostly Souichi and Tsuneki hanging out and flirting until some misunderstandings and a possible heartbreak gives us something of a cliffhanger. The flirting and all should be deadly dull, but they make it passable here with Souichi’s turned-on reactions to things, let’s see … foot soles, Tsuneki eating the last of his ramen while wearing his sweats, sweat pant marks by the navel, and finally wearing something while in the bath, because you had to figure they would visit the men’s bath together, right? Apart from that it was study-study-study, and now summer break is over, time for a crisis or two. Next week is probably the last for this arc so they better wrap it up quick.

It’s probably a good thing hapless Souichi doesn’t go to the school in Demi-chan wa Kataritai, with Sakie the Succubus as his teacher. God knows what other weird imagery we might get from his brain and libido. In episode 3 we follow Sakie around for awhile, understanding why she wants to keep herself so far away from men but wondering if she really needs to live way out in the boonies and take the nearly-empty first and last trains to and from work. Especially when being tired means her guard drops and she accidentally turns on a few men around her. The episode gets more fun when we see her thinking about Takahashi, wondering if his seeming unflappability means he has a low sex drive (ouch), and wondering if there’s any real difference between her crushes and the, er, crushes she inflicts on men. There’s a nice scene with Kyouko in the library where they discuss maturity (a lie, says Sakie), crushes, Takahashi, and shelve books with meaningful titles. Meanwhile Takahashi, the cause of much of this talk (ironic since it’s Sakie who’s supposed to be the succubus) ambles around, asks Hikari more embarrassing questions, and acts weird in front of the students. The usual. Another good episode.