Parts of Little Witch Academia 3 are predictable from the start. Akko can’t fly a broom, endless scenes of her trying to learn, getting Lotte and Sucy to help, borrowing a manual from Ursula, and still failing, so by the time of the race she STILL can’t fly. While Sucy had set up some traps to level the playing field (for a race that’s been held for over a thousand years, they don’t seem to have many rules about sabotaging other brooms or modding your own), you knew they wouldn’t matter at the end, that at one point Akko’s magic potential would break through at just the right time … and you’d be wrong. Heh. 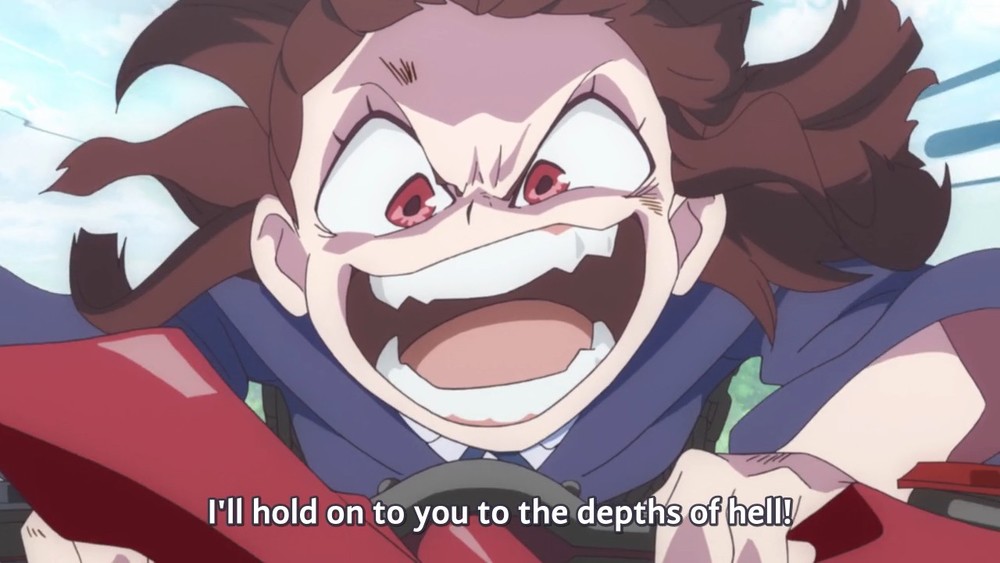 Two things save this episode from predictability. First, Akko is so damned determined. After getting knocked off the broom from hell (stolen by a classmate for her own use) and getting rescued by Diana (nice touch), Akko simply sticks herself in a cannon, fires herself back up to it, and wraps chains around her so she won’t fall. No way is she not going to finish this race! Even the broom is surprised. That’s enough to make me smile right there, but when you add Trigger’s direction and reckless, crazy animation style, it was silly-grin time for me. In fact, for three episodes now the show has ridden on those two strengths: Akko’s enthusiasm and Trigger’s animation. I hope the larger story arc, when it kicks in, can make full use of them.

Meanwhile, in ACCA-13 we get rumors, meaningful side glances, and spoiled plans. We meet Prince Schwan, who believes that his coming-of-age ceremony the king will abdicate and appoint him leader. Others aren’t so sure. In any case, Schwan wants to eliminate ACCA; this is not a rumor because he says it outright. Meanwhile Lilium believes Grossular wants ACCA to have absolute control, and that Jean is an intermediary for the coup people, whoever they are. Mauve believes certain powers don’t want Schwan in power, and asks Jean for any information about a coup that he comes across. Nino continues to report to Grossular, Lotta eats sweets, Jean eats fruits and smokes a lot. 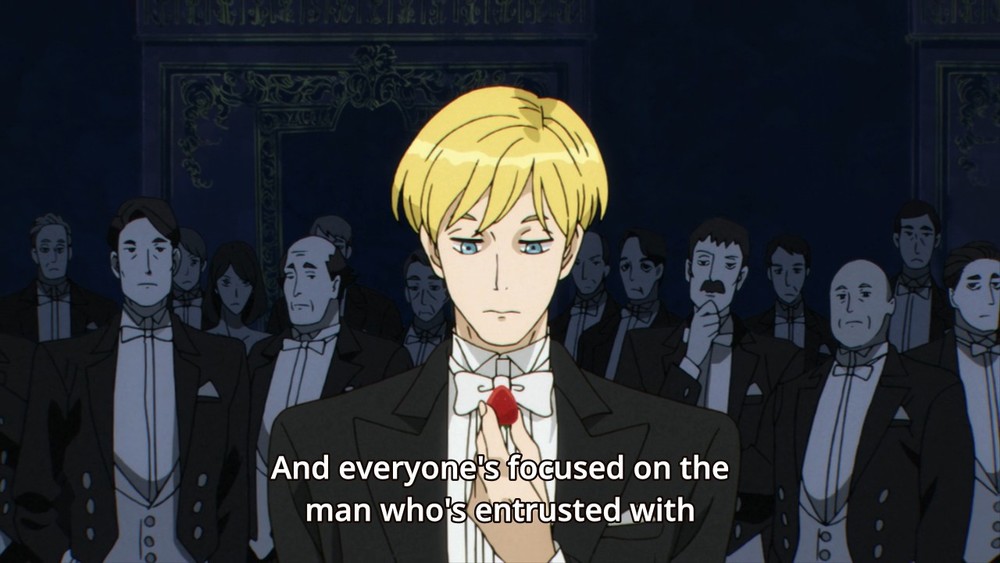 The upshot is that everyone thinks Jean is part of whatever plot the other plotters are plotting. It’s not only the rumors planted by Grossular, it’s because he is familiar with every region in the country and has connections with the people there. All of the rumor threads are linked to him, and it’s most likely that he doesn’t know a thing. Unless people tell him things to get him on their side he would be completely oblivious, or that’s what I think, but I know as little as anyone else schmoozing and giving him side-eyes at that formal dinner. No wonder he steps outside to smoke so often. It works because we don’t really know WHAT is going on in Jean’s head. He completely cool and unflappable, unless he sees Mauve in a sexy dress, that is.

Kobayashi-san Chi no Maid Dragon, while not on the same level as the first two shows I wrote about, continues to at least make me smile, or at the point where Kanna gets a bug to land on her finger and eats it, send me into hysterical giggles. Right now the series continues to introduce us to new characters, i.e, new dragons, and introductions always slow us down, but, like the little snippets of moving house and the usual scenes you get in those, discovering photo albums or old books or clothing, etc, nothing goes on too long. It breezes through one to get to the next, and the next. Fafnir’s transition from fearsome being to game-loving tsundere is so quick you wonder why other shows bother to devote so much time to such things. The only time the episode stops to rest and be introspective is when sleepy Kobayashi assures Tohru that she’s not too loud, and that it’s a good life they’re living now, mentioned again later in a conversation with Lucoa that must have taken fifteen seconds.