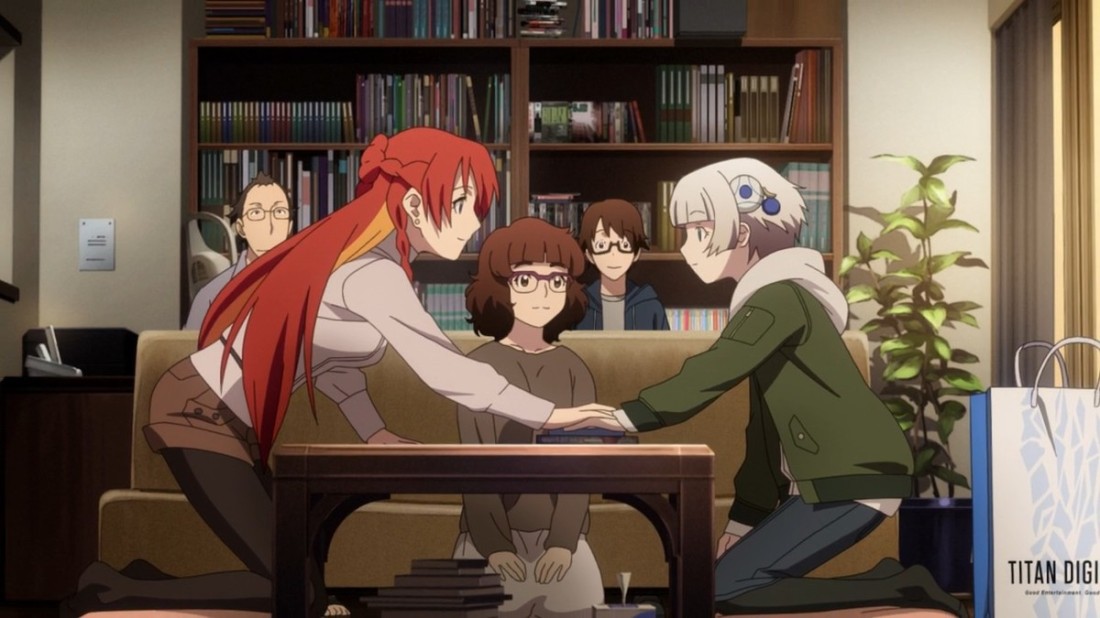 Re:Creators 4 is a series of infodumps. The first one, another long Meteora speech, is the more interesting. She’s concerned that this world can’t take too many fictional characters running around in it, screwing around with our physical laws, and that if it continues, our world and theirs may have to be “reset,” which doesn’t sound pleasant, though he says nothing about who or what would do the resetting. There’s also the concept that our world “has to make things make sense,” an interesting idea that he doesn’t expound on. Still, apart from that last bit it’s all stuff we could easily speculate ourselves. There’s also speculation from military uniform girl, that she might simply want to have the world crash down on itself out of spite. We later turn the mystery girl, who is conning the valkyrie-figure Alicetaria into causing trouble for her sake, though Makina seems to have her doubts. But the best part of the episode goes back to Meteora, who , in a touching speech, announces that she had not taken a side until she played her game and was satisfied that her (deceased) creator obviously cared for her and her world, even if she smilingly refers to her game character as a cariacature of herself. I sort of wished she had used the word “2D.” 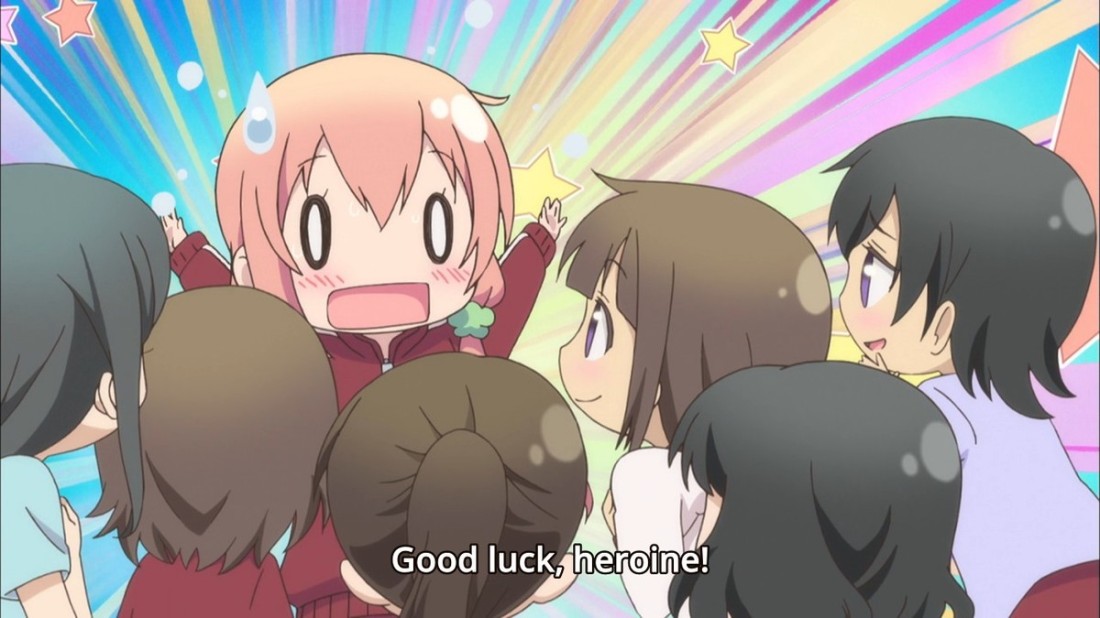 As for Hinako Note 4, I’m beginning to lose my patience. I’m a little concerned because this show has developed a plot–putting together a show for the cultural festival, and getting Hinako confident to perform in it. To this end they bring back the absent advisor, who turns out to be a nine year-old prodigy with big boobs. She sees Hinako fail to dance, but also sees her sing brilliantly, Hinako’s moment of triumph for the episode, and promply chooses her to play the lead in her own script. At the end of the scene she gives a hidden, evil grin, which is enough extra plot-fodder for me to keep watching … if I WANTED a plot. My favorite Cute Girls Doing Cute Things shows don’t have one, or there is a minor story each week which is dispatched around cute moments. While the show does aim for cheerfully aimless from time to time, these scenes aren’t as good as in, say “Is the Order a Rabbit?”. Maybe because none of it is weird enough, well, apart from Kuina.

Sakura Quest 5 gives us a low-key end to this story arc, but then again, Sanae’s troubles, running away and now maybe running away again, isn’t a problem you solve with big dramatic scenes. Instead she picks up what she needs to go on from Tatsuo and his shoe, an incidental funny anecdote that gets the wheels in his turning, and a not-so-great speech from Yoshi about how all work is made personal, even if some people don’t realize it or give the worker the acknowledgement he or she needs. So Sanae’s taken care of. It’s on to Yoshi’s great plan, to decorate the town hall with hand-carved wood, a ludricrous concept that is happily fiddled with and embelleshed into a 100-year project to decorate the train station with Ranma. Much more sensible, though I wonder if their descendents will follow through, and It’s not a bad idea to think of town revival as a long term thing.