Sakura Quest 9, while satisfying in a straight plot kind of way gets a little sloppy in execution. Everything the show was up to last week is taken care of. Shiori takes command of the project and does a good job. The tourism board comes up with a dish. Sayuri and Kumano learn why the other “didn’t show up” on that day. Baa-san and Kadota are satisfied enough that they are less annoying than usual. But I’m not terribly happy about how they went about it. Shiori just steps in, nervously, and does everything. Nothing more is made of it. The dish, chosen by a competition at the festival, came from the fact that everyone in their town eats a hell of a lot of somen, yet no one thought of using it for their promotional dish. Same with the konbu. Finally, how was Sayuri able to deduce that she had the wrong day, several years ago, by seeing calendar for 2016, several years later? So much lazy plotting in this episode. And then there was Yoshi/Doku’s contraption … Maybe it was Yoshi’s way of publicly atoning for screwing up. 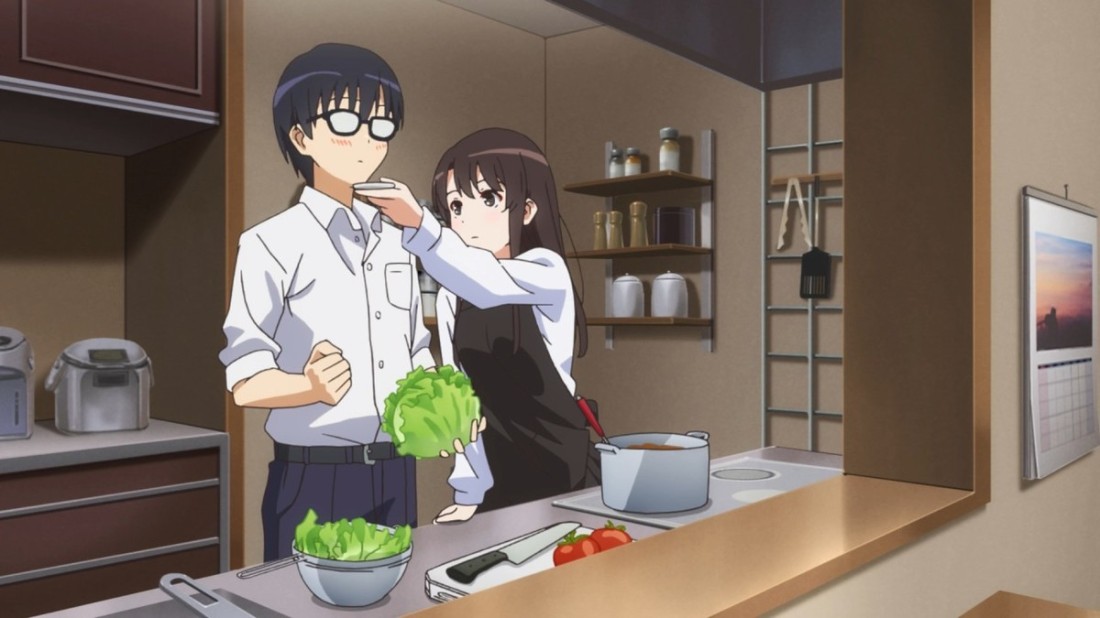 Prior to Saekano Flat 8, Tomoya had difficulties with all three girls. Utaha is graduating and may no longer have the time for his next project. Eriri still had artist block, and Meguni was angry with him for excluding her late in the last game’s production. You can’t deal with all three problems in one episode, so instead we get a full half-hour of Tomoya and Megumi talking it out, in the AV room, shopping, cooking dinner, having a bath (by phone), and in (separate) beds. Even without the erotic or even domestic overtones, this sounds great because it’s Megumi, but she, perhaps out of anger, doesn’t come up with a lot of good lines. Nevertheless, one interesting thing comes out. Tomoya makes her realize that she was partly angry because she loved working with the group. But after that there isn’t much interesting to say; you can tell she’s at least partly forgiven him because of all the time they spend together, but it becomes clear that he hasn’t really changed that much. His new game sounds pretty lame, for all his talk, and as Megumi points out, he still can’t figure out what she (or most girls) are thinking. Why she’s hanging around I don’t know.

Re:Creators 9 has some bad news in it. I won’t spoil it since it was only aired yesterday, though I also think it’s not the end. Besides, the REALLY bad thing about this episode is that it’s almost entirely devoted to Magane. First she ruins Mamika’s plan to warn Alice-chan about Altair. Alice, being dumb as a box of rocks, falls for it. Then she tries to drive Souta out of his mind with guilt, then it’s another “You’re the same as me” speech, or maybe that was with Souta … Then it’s more smirking and half-truthing when Yuuya and Meteora show up. You want an evil character, fine, but her evil is so damn boring I wanted to jump ahead to a scene where she wasn’t around. Next episode, please, and make it one without Magane.